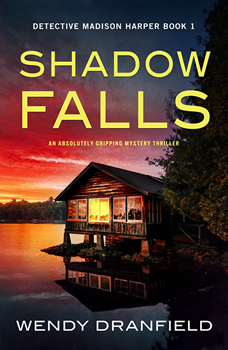 SHADOW FALLS, Wendy Dranfield’s fifth novel featuring Detective Madison Harper, is set to keep enthralling her fans and new readers. Another character-driven thriller entwining interlinked relationships within a symbiosis of past and present.

Twelve-year-old Jenny’s parents thought their little girl was safe at an idyllic summer camp in Shadow Falls, Northern California. They were wrong—and it took Detective Madison Harper to scrape the springy moss over the cesspit.

When Harper arrives at the remote summer camp, she can sense the evil lurking within the peaceful, silent cabins, filled with rows of neatly made beds. Her professional antennae quiver, and she knows the camp is hiding a terrible secret.

Her heart breaks to learn of Jenny, the sweet little girl last seen splashing in the lake with her friends before she vanished.

The parents are distraught, and the local police at a dead end—they desperately need Madison’s help. She’ll do whatever it takes to crack this case because it’s the only way back to the son she lost to the care system years ago, when she was framed for a crime she didn’t commit.

Between the tight-lipped camp staff and her new partner on the edge of a breakdown, Madison can’t find anything to support her honed instinct that there might be more to Jenny’s perfect parents than meets the eye. Until she discovers a disturbing family portrait Jenny drew at the local library, which suggests a troubled personality lurking under the placid, angelic surface. It raises questions about those Jenny trusted most.

One thing is certain—if Madison doesn’t find the answers soon, the lives of more innocent children will be at risk.

Wendy Dranfield’s knowledge and experience inevitably blossomed into crime writing. “I’ve worked with prisoners, for charities trying to stop the exploitation of vulnerable adults and children, and I’ve worked as a coroner’s assistant, so writing crime fiction is a natural progression,” she says.

Dranfield has authored a young adult crime novel and started two crime series—one featuring Detective Dean Matheson and the other Detective Madison Harper, male and female respectively. Several of her short stories have been published in UK and US anthologies. She has also been shortlisted and longlisted for various competitions, including the “Mslexia Novel Competition.”

Writing took root in Wendy as an infant passion, tweaking the plots of childhood books and then typing them up on a second-hand machine. Shortly, the typewriter started receiving her own stories and then Stephen King became an obsession and took over. Now she counts others in that gathering, lit up by Joyce Carol Oates, George R.R. Martin, and Susan Hill.

Truman Capote’s In Cold Blood figured as part of her English Literature college course and she counts that as her strongest literary influence which “stayed with me for years. Capote’s writing inspired me. It’s a book I re-read frequently.”

And then, of course, Wendy Dranfield’s imagination and creativity started feeding on her childhood passion of plot-tweaking and real-life experience with crime to actually start crafting crime thrillers.

Dranfield started composing SHADOW FALLS by wrapping the story around the two lead characters, seeking redemption from their own inner demons by working interdependently on the case.

Madison Harper is a former detective released from prison after a wrongful murder conviction. Nate Monro “is studying philosophy when he meets and falls in love with Stacey Connor. He makes the difficult decision to give up on his dream of becoming a priest to be with Stacey. But then she’s brutally murdered just after he proposes.”

As the first of a series, writing SHADOW FALLS was the challenge that actually led to a two-book deal with her current publisher.

Wendy Dranfield, in keeping with her habit, “didn’t write SHADOW FALLS to an outline, but let the characters tell the story. Sometimes a publisher will request outlines before contracting a follow-up book, and that has happened with the next few in the series, so they are written to very loose outlines which have evolved as the stories revealed themselves. I prefer having no outline as I feel like the first reader of the book; waiting to find out what happens the same as anyone else.”

Dedicated to her craft, she says, “I rarely have two days off at a weekend and only the odd week’s holiday here and there. Mainly because I have a terrible memory, and once I stop working on something to take a break, I’ve forgotten what’s going on.”

Wendy Dranfield writes full-time in her study at home, “seven hours a day, six or seven days a week during a first draft or when meeting deadlines.” Even music detracts her from her creative production, though she often writes under the silent gaze of one or all three of her cats — her “writing buddies Joey, Sookie and Teddy.” In that she is very unlike Stephen King, one of the writers whose influence she acknowledges, known for writing to the blasting sound of Metallica.

Writing in silence, however, is no bar to appreciating the presence of her “husband who is working from home during the pandemic,” in their beautiful house set in a peaceful garden in Wales.

Which is where she takes time off to “enjoy growing fruit, veg and plants, take a break outside for lunch when the weather is nice, when I can check on my seedlings and water things. I also enjoy walking, and I read every day,” delighting the earth in the feel of her bare feet and the winds longing to play with her hair—as Khalil Gibran might have said.

Wendy is a former coroner’s assistant turned crime writer who lives in the UK with her husband. As well as two crime series and a YA crime novel, Wendy has several short stories published in UK and US anthologies. She has also been shortlisted and longlisted for various competitions, including the Mslexia Novel Competition.