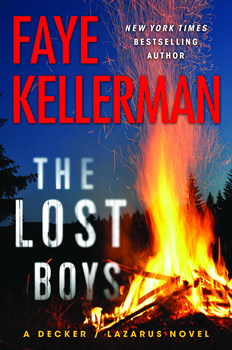 Welcoming in a new year becomes extra special when it also means the arrival of a new Faye Kellerman title in her long-running New York Times-bestselling Peter Decker/Rina Lazarus series.

THE LOST BOYS is set in upstate New York, and its premise is an intriguing one. It involves the unexplained disappearance of Bertram Lanz, a young man with developmental disabilities, who vanishes on a supervised outing. But just as the reader is led deep into the twists and turns of that particular mystery, the search for Bertram uncovers the long dead remains of one of three young men who went missing during a camping trip.

Decker and his partner Tyler McAdams now have the challenge of solving both a hot and cold case, with time running out as they search for answers. And along the way, there are significant challenges on the homefront as well. After a 10-year absence, the biological mother of Decker and Rina’s foster son has reappeared, wreaking emotional havoc on the young man and the family. It’s a fast-paced and suspenseful read that builds to a shocking end.

This is the 26th novel in the series, yet it has all the excitement and energy of a series that’s just getting going. While it may appear effortless to the reader, Kellerman acknowledges the challenges in keeping a longstanding series fresh and innovative.

Her characters are key to making it work. “I don’t want to alter their basic personalities,” she says. “It would be jarring for me and my readers if I did that. The way that I keep them fresh is to drop them into novel situations and see how they react. I work very hard at writing different storylines from book to book. Each case requires a different mindset for Peter Decker. Sometimes, I really don’t know what’s going on until the end. Ergo, Peter and Rina don’t know what’s going on until the final pages, either. So let’s see how deep Peter needs to dig within himself to solve the investigation. Let’s see what inner strength he draws from to move forward.”

The character of Rina Lazarus—Decker’s Orthodox Jewish wife—works in a different way for Kellerman. “Rina is constantly surprising me. She is a religious woman, and that is part and parcel of who she is. But she employs this weird combination of being intuitive and analytical. Her insights keep Peter’s thinking from lapsing into tunnel vision. She is always offering skewed insights that lead his investigation to somewhere new. She is a divergent thinker because she is an outsider. She knows how to read people because she is constantly explaining herself to a world that finds religious people mystifying. She has learned to be succinct. But she is always very kind, also a trait that is undervalued in today’s edgy society. She’s different, but rather than emphasize her differences, she stresses the commonality. She’s a peacemaker. But she definitely has a mind of her own.”

Readers took this nuanced fictional couple to their hearts back in 1986, when the first book in the series, The Ritual Bath, was published. Their success was by no means planned by Kellerman. “With The Ritual Bath, I was in the process of finding my voice. And since I didn’t know that it was going to be my first novel, I threw in a lot of different aspects of what I wanted to write about—my religion, my love of detective novels, my love of exotic locales, my desire to write about people who were interesting but not quirky. I was hoping that someone out there liked what I wrote.”

With the series still going strong over three decades later, it’s safe to say that that hope was realized.

Running through THE LOST BOYS is the issue of the return of the mother of Gabriel, Decker and Lazarus’s foster son, and the complications it causes. Gabriel is only one member of the extended family that has grown over the course of the series. “I love writing relationships and family,” says Kellerman. “It’s what keeps me going. The fictional family was more organic than planned. As my children grew up and had families of their own, I really began to enjoy what it was to have extended relationships. The bigger the family, the more the drama. And at the moment, the Decker family is quite large and very diverse. Many members come from very different background, but they all get along because there is love and admiration between the members.”

Being focused on family is what keeps Kellerman going in real life as well as in her fiction. But in common with so many people across the globe in these times of a pandemic, she has had to endure the ongoing and deep sadness of not being able to fully be together. “Of course, I social distance and wear a mask. When family comes over, we’re outside with masks. I miss seeing friends. I miss going to synagogue. I miss hugging my grandchildren. But these are minor inconveniences compared to what many others have had to endure. I find it extremely distressing that so many people—specifically in the hospitality department—have been put out of business.”

Kellerman further acknowledges the good fortune that she has had. “Writing is solitary by nature. It’s done at my desk in my house. So that hasn’t been affected by COVID. I intend to take the vaccine as soon as it’s offered to me.”

The end of THE LOST BOYS gives several clues as to what’s next for Decker and Lazarus and what Kellerman has planned for them. While she’s not giving the details away, readers can be assured that she has many more gripping stories to tell.

“Life keeps me guessing. It keeps Peter and Rina guessing as well,” she says. “But I can tell you one thing. I love life. Life is always an adventure. And I’m up for just about anything.”