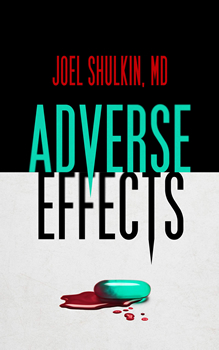 In most thrillers, our heroes face bullets, bombs, or invading armies. But what if the real threat is in your mind? That’s one of the questions Joel Shulkin poses in his new medical thriller, ADVERSE EFFECTS.

The story starts when patients in clinical psychiatrist Dr. Cristina Silva’s study group start killing themselves. She’s not just worried about the patients—she’s taking the same drug. It’s helped her recover memories she’d lost in the accident that killed her parents, and she doesn’t want to lose those memories—but she needs to prove the drug is safe.

According to Shulkin, Christina is not outgoing. He says that at a party she’d be the girl in the corner, nursing a mojito until her best friend dragged her into a conversation. But there’s good reason for it.

“The scars of a past relationship hold her back from getting too close to anyone else,” Shulkin says, “and her passion for neuroscience can cause her to be unintentionally hurtful when defending her point.”

That said, if you’re lucky enough to get past her defenses, she’ll fight for you with her last breath. She may underestimate her professional ability as a psychiatrist and be unaware of her potential as a heroine.

“Her actions are driven by one goal,” Shulkin says. “To restore the memories she lost in a car crash two years ago. She’s made poor choices, even unethical ones, in her desperate quest. She’s made mistakes in the past she doesn’t even remember. And yet she cares about those she meets: her patients, her pet, her best friend, and even the stranger who approaches her on the street. She’s willing to bend the rules to help an Alzheimer patient who, like Cristina, wants nothing more than to hold on to the memories of her family.”

Over the course of the book, she rises above her fears and risks her own safety—and memories—to save those she cares about. But she’s dogged by hallucinations, nightmares, delusions, and a commanding voice in her head. She struggles to keep her wits while she battles real and perceived threats against her career and her life. As her mental state deteriorates, she must face the possibility that either she’s going insane, or everyone she trusts is against her—or both.

Christina’s search for her true identity has her dodging friends who may be enemies and the adverse effects of a drug that could destroy her. But the real threat is the mercenary called Quinn. When his parents cut off his access to their wealth at a young age, he sought power as a replacement—and found it.

“He wants information locked away in Cristina’s traumatized mind,” Shulkin says, “but he also wants to keep her from learning the truth about her past. He hates getting his hands dirty, and so he sends operatives to do the hard work while he operates behind the scenes to help develop the memory drug for his own devious purposes.”

Part of what makes this book so scary is the basis in fact. Anything we put in our body has the risk of adverse effects that sometimes don’t become obvious until years after federal approval.

“The asthma medicine montelukast, long thought to be a safe and benign drug, was recently linked to mood changes and risk of suicidality,” Shulkin says. “All currently available psychotropic drugs, those that affect our mind and emotions, have the potential to cause more harm than good, which is why it’s always critical for prescribers to weigh the possible risks against the possible benefits with their patients.”

Clearly a great deal of research went into this novel. Still you may wonder how the story came together in the author’s mind, and why he chose to create a female protagonist. Shulkin tells us that the idea for this book came from sitting in an empty bus in Boston.

“A few minutes into the ride, someone else boarded and, with every available seat to choose from, sat directly behind me,” he says. “To me, as a man, it felt mildly uncomfortable, but I could imagine that, in today’s society, a woman might be even more creeped out, especially if the person behind them started saying things to them like, ‘I know who you are.’ As the story idea developed, I knew I wanted my protagonist to be a female psychiatrist who had an empathic connection with her patients and who would react to the threats and discoveries she encounters from a deeper plane of emotion than a male protagonist might. The reason I made her Brazilian is simpler: my wife is from Brazil, so I’m well versed in the culture.”

Actually, that ended up adding a rich layer of complexity to both Cristina’s character and to the story itself. And in any case, writing a character having hallucinations and delusions must be challenging. So I asked Shulkin how he handled switching from reality to hallucination and back.

“I needed lots of coffee and some serious counseling afterward,” he jokes. “No, seriously, I’m a big fan of stories that blur the lines between reality and fantasy, like Total Recall and The Girl on the Train,  so I enjoyed the challenge of envisioning what Cristina experiences, remembering that it all feels real to her, even when her psychiatrist mind tries to convince her otherwise. The key in writing these scenes was to show Cristina’s reactions as if she were truly living those experiences, and then afterward describe how she tries to analyze them.”

In fact, the character became so strong that Shulkin is already finishing a sequel. Titled Toxic Effects, it picks up a few months after the ending of ADVERSE EFFECTS, with Cristina trying to start over and fill in the remaining missing pieces of her life. Of course, new drugs and new villains threaten her loved ones.