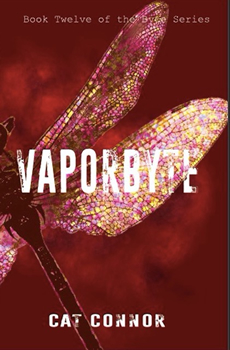 The 12th book in Cat Connor’s Byte series packs a punch—it opens with the in-progress abduction of SAC Ellie Iverson. Timing couldn’t be more problematic, as she’s in the midst of planning a birthday party for her twins. No wonder her husband is pressuring her to retire from the FBI. Now a missing accountant and a murdered scientist are added to her juggling routine.

VAPORBYTE is a non-stop action tale by all accounts. But author Cat Connor insists it’s also about friendship and moving forward. “And that’s probably not what anyone expected me to say,” she says. “The Byte books are always about relationships on some level, and this one is no exception. It’s also about humanity and how our experiences change our outlook.”

Most people think Ellie is a version of the author, but that’s never been the case. According to Connor, the only points in common are that they’re both Sagittarius and dislike honey. Well, three things, if you count their love of Glocks.

“The biggest change over the course of the series,” Connor says, “Is Ellie embracing her differences and learning to employ her unique talents regardless of how they make her appear to outsiders, and how she’s learned to trust herself and her instincts. I also enjoyed how she grew from being quite prickly when help was offered to accepting that everyone needs help sometimes. Her loyalty, her compassion, and her sense of humor stayed intact.” 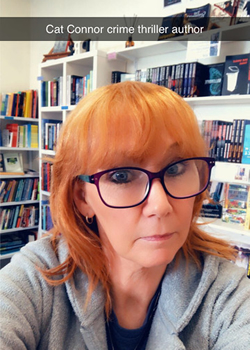 Connor says she does extensive research, a process she finds fun most of the time. She says that research for this book in particular was most enjoyable, with some bits of info even falling into her lap.

“I had a lot of conversations with a lot of people all over the world,” she says. “Let’s just say the whole book was interesting for me to write.”

A staple in the Byte series is the song titles that appear just below the chapter number. They can be strung together to create a playlist. But one artist she’ll never use is Pink Floyd. “If you suspect a Pink Floyd song, take another look,” she says.

VAPORBYTE is set in the present day, after a fashion. For purposes of the story, COVID was controlled a lot faster than in real life. The story actually takes place toward the end of 2020.

“That’s the joy of fiction,” Connor says. “I don’t have to stick to the current timeline and match everything up—which would be hard when the book was written before the pandemic—and just tweaked to include it a wee bit. My version of COVID in this story isn’t as grim as reality.” 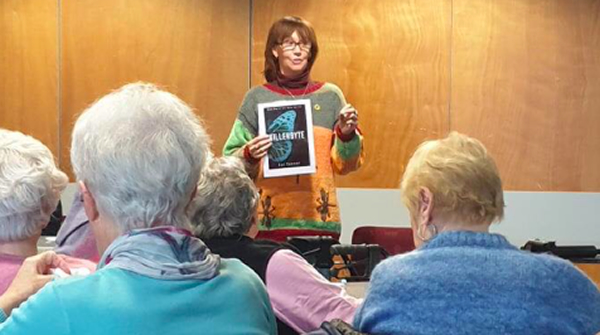 Connor speaks about crime writing to the 60s Up Club at Writers Plot Bookshop in Upper Hutt, New Zealand, in June 2020.

All good things must come to an end, and VAPORBYTE is the bookend that closes the stories that began with Killerbyte 15 years ago.

“I wanted to end the series two books ago,” she says. “But then I’d have three boxed sets plus one book, which is not very tidy. I knew years ago how it ended but not how they got there. Ellie has been my constant companion, but I’d like to concentrate on some closer-to-home stuff.” 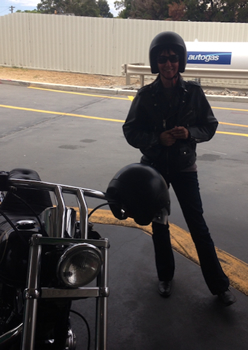 Connor in Perth, Western Australia, in 2015

Never one to go quietly into the night, Connor wrote two slightly different versions of the book, and you can tell by the cover artwork’s predominant color—purple or red. Readers will have the option of purchasing Red or Purple—or both. Only catch is, she’s not telling how they’re different.

“One of them is my favorite ending,” she says. “About four of my beta readers said it was going to cause a storm. Years ago, my youngest daughter asked me to write an alternate ending for Terrorbyte, but I didn’t. This time around I wrote an alternate ending. The most fun part for me is that people will be talking about the ending, especially if they read different versions.”

After the Byte series, Connor will change gears and write a spy/PI story set in Upper Hutt. It follows up an old book from her that was also set in New Zealand. It’s different from what she’s been doing with Ellie for the last 15 years. In fact, she’s looking forward to writing in third-person point of view for a change.