Taking a Character to the Next Level 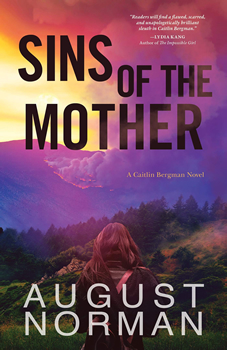 For most of her life, Caitlin Bergman told everyone that her mother was dead. But when an Oregon sheriff calls, she finds out that her long-standing lie may have finally come true.

In August Norman’s second thriller, SINS OF THE MOTHER, Caitlin travels to Oregon to identify her mother’s body—only to find that her mother had been part of a cult for all this time, and the chance for Caitlin to finally find out who her real father is may have died with her.

Norman took some time out from working on the next Caitlin Bergman novel to sit down with The Big Thrill and share how he kicked the “sophomore slump” and is powering through new writing—even with a pandemic in the background, and a new baby drawing his attention.

Caitlin Bergman is a strong female protagonist that started out as a minor character in one of your screenplays. Where did you get the inspiration for her character and how did she evolve into your protagonist?

Caitlin began as the foil to a hard-boiled ex-cop searching for redemption—the honest journalist with a few bad habits but a strict moral compass. As I’d written that screenplay in the heyday of independent film, the character was meant to be a chance for one of my best friends to move out of girl-next-door guest star roles into something with real depth and range, a break-out lead role that a talented actor could mine for gold. Once I’d novelized that screenplay, I and everyone who read the manuscript knew that she was the character who should move into the future. 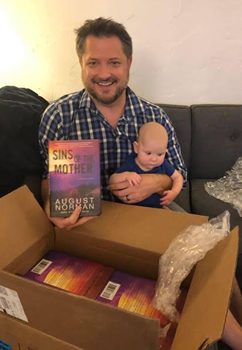 Norman holds his new book baby in one hand, and his actual baby in the other.

As a journalist, Caitlin is able to explore the themes you care about while dealing with her personal demons and searching for a greater truth. Of all the themes and demons you’ve had her explore, which were the hardest to tackle?

Certainly, being a man and writing a realistic female character is its own challenge, and something I take seriously. While SINS OF THE MOTHER explores mother and daughter relationships filtered through the lens of an adopted child searching for her birth mother, my previous novel, Come and Get Me, took Caitlin to darker places. That novel was my attempt to empathize and express my helpless rage on behalf of the victims of sexual assault on college campuses. While I knew I would never claim any authority or ownership on the subject, I made sure to vet that manuscript through not only my therapist, but also more than 25 beta readers before a publisher ever saw a draft. Of those 25, 20 were women. Of those women, at least two were in their 70s, 60s, 50s, 40s, 30s, and 20s, and included people of color and all sexual orientations. That process, plus the effort to keep Caitlin speaking like my friend, rather than speaking for the entire female experience, helped me stay on track. SINS OF THE MOTHER is far less traumatic, though I still made sure to consult mental health professionals on the effects of growing up in a cult, as well as hours of extensive research, and the eyes of my trusted beta readers. Through this process, I feel like Caitlin stays grounded, and while not always likable, she’s believable, honest, and able to tackle the worst in us all.

Religion, specifically that of a cult, plays a major role in the novel. What drew you to this idea?

The last decade’s cultural regression in the acceptance of science, political tribalism, and straight-up Flat Earthers (seriously, where do they think the edge is? They can just get a boat and go look…) has shown just how fragile even the smartest among us can be when forced to choose reason over emotion. Cults take emotional tribalism to the limit, often even to the point of no return. So while I’m using religion as the vehicle, I’m really trying to explore that sloppy border between belief and cognitive dissonance, as in the mental adherence to something disproven easily by facts. The Daughters of God, the cult I got to make up for SINS OF THE MOTHER, still has members, even two years after the end of their world was prophesized. I wanted to know what would keep people hanging on after the major tenet of their faith was shattered. On the other side, I’ve got a white supremacist group, whose belief system makes just as little sense in the modern world.

The settings of your novels are different, but each has a part in telling the story. In SINS OF THE MOTHER, the Pacific Northwest is the central location. What about this location made it the perfect place to set the book?

To tell this story, I needed somewhere in America that you could hide a cult within miles of the broader society. I also wanted a setting where the locals feared the end of their traditions because of a liberal shift in ideals and would be willing to fight to ensure their ways of life. Oregon’s lush forests, rocky coasts, inland plains, tribal lands, federal preserve, and wild-country-feel all bash heads daily with the new Bohemia tech sector billionaire playgrounds of Portland, Silicon Valley, and Seattle. Caitlin is searching for her past in a state that’s dealing with its own growing pains. In SINS OF THE MOTHER, the area’s small government “Don’t Tread On Me” mentality allows white supremacists to flourish in the same proximity as a reclusive cult. It’s only a matter of time before the two fight for their ideals, no matter the cost. 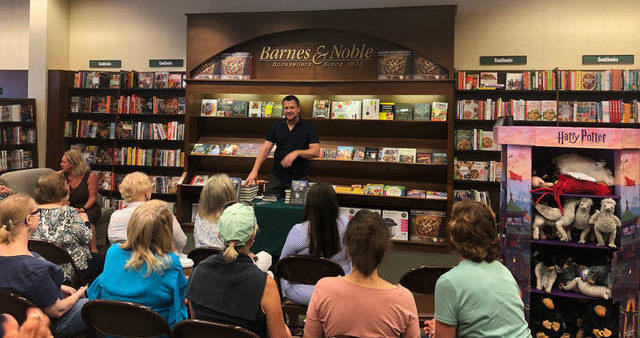 Norman talks about writing at an event for his debut, last year’s Come and Get Me.

Often writers suffer from a sophomore slump. How did the process of writing the second compare to the first?

While I’d had a rough sketch of SINS OF THE MOTHER ready before the release of my debut, Come and Get Me, I found myself with the dream-come-true opportunity and/or obligation to finish the follow-up in under a year. Luckily, I had the confidence that comes from repetition. I’d taken around seven years to work and rework a first manuscript, learn about the industry, and find representation. When that first manuscript stalled, I was able to write and rewrite Come and Get Me in under two years. SINS OF THE MOTHER came together in five months. Since Caitlin Bergman had existed in each of those stories, I had a pretty good idea of her philosophies on life and the ways I could push her buttons. Plus, readers at interviews or signings for Come and Get Me would ask questions about her life that I hadn’t even considered. Finding answers for those questions led to natural writing prompts.

Did you find any challenges staying true to Caitlin in the second novel?

While I personally didn’t have much trouble getting in touch with Caitlin, I didn’t expect the added bonus of hearing what readers liked about her. With a debut, you get to say, “Here are my characters; this is what they do.” While plotting the second installment, readers from my publishing team to Goodreads followers wanted to know who would come back, how Caitlin would grow, and what horrible junk food she’d eat this time. I made sure to honor that relationship with the reader while taking Caitlin in a new direction.

You address the ever-changing idea of family in SINS OF THE MOTHER. Has becoming a parent changed your perspective of what a family is?

In the lead-up to my entrance into parentage, I did a lot of soul-searching on what I believe makes a good parent and what constitutes family. Whether related by blood, chosen through adoption, or selected from a pool of friends, I think the closest families are born through love and sacrifice rather than biology. As unnatural as it may seem, sometimes the best thing a parent can do is realize they don’t have the skills to guide their children through life and leave them with someone more qualified. Having never met her birth mother, raised by a mostly single adoptive father, and now childless in her early 40s, Caitlin explores her own family’s tree, ultimately seeing another side of her perceived abandonment and the sacrifices and openness needed to truly love. 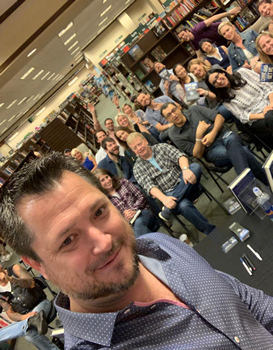 Reflecting on pre-pandemic times, when book events were live rather than virtual.

What is advice you wish you had gotten earlier in your writing career and the one thing you had to learn the hard way?

Don’t waste time telling yourself why people will reject your work. Anything can be improved once you’ve typed The End, so force yourself to get to that last page. People can’t reject, or even publish, what they never get to read.

From self-published indies to traditionally published bestsellers, there is no author who gets to sit back and just write. Embrace the world of publicity if you want to reach readers, even if that means dipping into your own pocket. No one else is dreaming your dreams.

You are a founding member of LA’s longest-running improv comedy show, “Opening Night: The Improvised Musical!” Have you ever had writer’s block on stage?

The great thing about group improvisation, whether that be in a jazz combo, a writer’s room, or onstage making up a Broadway-style musical with five other people, is that you’re always building something together. I’ve been playing with the cast of Opening Night since 1998, which means our ensemble knows each other so well that we can jump and the net will appear. While I personally may have an off night here and there, the strength and generosity of the other players means the show will never suffer. I try to bring that same open-minded sense of adventure to the solitary act of writing a novel. If I get stuck on the page, I try to imagine how I’d help another player in the same situation on the stage.

Where is Caitlin Bergman going next and when can we look forward to that adventure?

So far the next Caitlin Bergman novel will keep her in her hometown of Los Angeles, where the teenaged son of her once-best-friend has gone off the grid, convinced he’s uncovered the conspiracy that drove his father to destroy his family in a tragic murder-suicide. Despite the young man’s obvious psychotic break, Caitlin sees a pattern in his frantic scribblings that leads to some very dangerous people and must stop the man before he hurts himself or others.