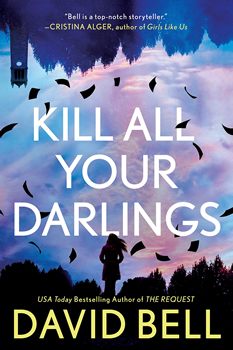 In every professor’s career, there’s one or maybe two students who are smarter or more talented than their professor. For Dr. Connor Nye, Madeline O’Brien is one of those rare finds.

In acclaimed author David Bell’s latest thriller, KILL ALL YOUR DARLINGS, Connor has been struggling in academia, battling his personal demons for years. So, when Madeline suddenly disappears, he uses her misfortune to try and turn his life around. This decision cascades out of his control and threatens to ruin him.

Bell was gracious enough to take time out of his busy schedule as a professor, while also working on his next novel, to sit down with The Big Thrill to share further insight into his latest release.

There are many power struggles in this novel—how were you able to write the female voice so well? What was your inspiration?

The two female POV characters are college students. Since I teach at a university—and have for many years—I’ve spent a lot of time in classrooms and in office hours listening to and talking with students, hearing their hopes and fears and anxieties. The students I teach are bright, creative, and interesting. My interactions with them keep me informed and aware of the things young people are dealing with, and I hope I did them justice in the book.

As a professor, have you come across a unique talent like Connor did with Madeline?

Absolutely. It doesn’t happen much, but every few years a student comes along who has a lot of talent that they’ve already started to understand and put on paper. They’re already more talented than I am, even now, and I’m never quite sure where that ability comes from. It’s my job at that point to encourage them as much as I can. Regardless of a student’s talent level, it’s daunting to think about starting down the road to a writing career, so I hope they think of me as a resource about what that life can look like.

You chose to write the main character in first person and the others third—was this a difficult or natural progression? Which do you prefer to write in?

I don’t have a strong preference for one POV over another. The story dictates the way it will be told. In the case of KILL ALL YOUR DARLINGS, it’s Connor’s story, and I wanted the reader to be close to him and understand the way he was thinking. But there were other characters in the book who knew and understood things Connor didn’t, so I wanted to bring them in as well. Connor spends the book trying to untangle all of these threads.

Now, with many successful novels under your name, do you find it easier to balance work and writing, or do you struggle as your characters did?

It’s never easy to find time to write. I still have a day job, but even people without day jobs have many, many demands on their time. Kids, parents, houses, life. And it can be easy to put writing behind everything else because there is no immediate demand for it, no boss looking over the writer’s shoulder insisting the work be turned in. Writers have to be disciplined self-starters. We’re our own bosses and office managers. We have to keep ourselves on track.

Madeline writes about very personal experiences. How do you weave the personal with the fiction?

All writing is personal. The actual events of a book never come directly from my life. Let’s face it, I’ve never been connected to a murder or a kidnapping. (Knock on wood.) But the emotions in the book are ones I’ve likely felt. Madeline is struggling to put herself through school and is worried she’ll be paying off student loans the rest of her life. I’ve been there. She’s worrying about whether she’ll ever be good enough to have a career as a writer. I’ve been there. Connor is struggling to write and survive in academia. I’ve been there too. Everyone has these struggles with their jobs and educations and lives. I think everyone can connect to those things.

Do you start with the fiction or the personal when you begin a new novel?

Giving women a voice, and making sure they are heard, is a major theme in KILL ALL YOUR DARLINGS. What drove this plot line for you?

Academia is a place where a large power imbalance exists between the professors and the students, and we all know some professors have exploited that imbalance and sexually harassed their students. Certainly, we’ve made strides toward improving our understanding of this issue, but that doesn’t mean we’ve eliminated it from our campuses. I’ve seen female students who have had their academic careers derailed and who have suffered a great deal of trauma as the result of the kind of harassment depicted in the book. I know people very well who have suffered this kind of harassment in academia and elsewhere. Yes, I’m trying to entertain and write a thriller, but I also think any book can shed light on a serious issue—and only by shedding light can we hope to improve things for everyone.

Depression and trauma, as well as protecting one’s personal demons, are also themes in the novel. How do you, and writers in general, pour themselves into their work while not revealing too much of their own demons?

I’m not sure we can. We are what we write to a certain extent. Even if we hide behind the mask of fiction, our real selves seep into the writing. I believe good writing makes people uncomfortable, and in order to get there the writer has to be uncomfortable first. Writing isn’t a substitute for therapy, but it can be therapeutic.

How does the college setting in KILL ALL YOUR DARLINGS compare to the campus in your other life as a professor?

I would say Commonwealth University in the book is only very loosely based on Western Kentucky University where I teach. In the book, the English Department is housed in Goodlaw Hall, which has a cupola bell tower on top, just like Cherry Hall at Western Kentucky University. Other than that superficial connection, there isn’t much that is the same. Things never get quite as exciting in the real place as they do in the book, although someone once tried to burn Cherry Hall down. Maybe that will show up in another book.

My next novel, The Finalists, will be out from Berkley next summer. It’s the story of six college students who are selected by a wealthy donor to compete for a lucrative scholarship at a small private school in Kentucky. The only catch is they have to agree to be locked in a creepy old house on the edge of campus…and, you know, somebody’s going to end up dead. Maybe more than one person…