So Many Books, So Little Time 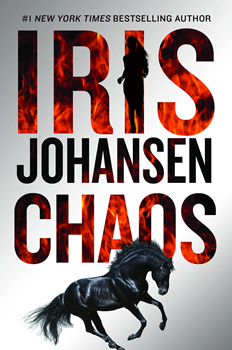 In the past 50-or-so years, Iris Johansen has introduced readers to countless characters—though few with as much notoriety as the iconic Eve Duncan, a world-renowned forensic sculptor whose specialty is in bringing closure to parents who have lost their children.

Eve has starred in upwards of 30 novels—the most recent being last year’s Persuasion, another bestseller to add to Johansen’s impressive list of accomplishments.

Enter Alisa Flynn, the smart, rebellious CIA agent featured in Johansen’s newest thriller, CHAOS. And while it’s possible Flynn and Duncan may meet in a future novel, for now, she’s quite comfortable taking a leading role in what Johansen hopes will be a fresh new series.

Kind of. Long-standing fans will enjoy revisiting characters from previous novels that have been peppered into this story—a story that takes place in Morocco, where at St. Eldon’s Academy, young schoolgirls have been kidnapped. One in particular—known as a bit of a horse whisperer—is special to Flynn, and she’ll do anything to get her back, even if it means breaking a few rules, putting herself in danger, and enlisting some…familiar…help.

It’s another page-turner from one of the genre’s reigning queens—but CHAOS is not for the faint of heart. In this The Big Thrill interview, Johansen talks about what inspired her aptly named new thriller, why now was the right time to introduce readers to Alisa Flynn, what we can expect from her next, and much more.

It’s been a while since you’ve introduced us to a new leading character—but Alisa Flynn was worth the wait. What can you share about the inspiration for her?

I knew that Alisa was going to have to be exceptionally special because of the truly unusual and colorful characters that surrounded her. I didn’t want her left behind in the slam-bang plot, but I wanted her to have a different kind of strength because of her character and what she’d learned as a child and her training with the CIA. Then when I introduced her to Gabe Korgan, it took everything up to the stratosphere. They struck sparks both mentally and physically, and he’s one of my very favorite heroes to date.

Alisa isn’t connected to Eve Duncan—at least, not yet—but she is connected to some of your previous characters.  I love how you keep your “world” tight, even when taking readers on new adventures—finding the connections are like hunting for Easter eggs. Why is this important to you? What are some of the challenges and benefits of connecting everything this way?

Though Alisa is the main protagonist, it seemed right to bring Margaret Douglas into this book because she was an old friend and the readers knew her well. When you’re talking about a plot with horse whisperers, wonderful dogs, jungles, and horse races, she fit right in. Some connections turn into secondary characters, some are merely drop-ins. I do like to have these connections, but you have to make sure that new readers aren’t left behind, and the relationships are kept fresh and new.

CHAOS is aptly named—the fast action feels like chaos (in the best way) from the beginning, and this book is classic Iris Johansen. How does introducing a new character infuse new life into your writing?

I love this title. It expresses so much about the plot as well as the characters that are thrown emotionally into a storm of self-exploration as well as adventure. New characters are always a challenge and it’s great fun to do whatever I want to bring them to life with no holds barred. Though dealing with previous characters is wonderful, and you can often change them as they grow with experiences, you always have to remember the intrinsic character you’ve already established. You can let new characters surprise you.

I love the setting for this book—St. Eldon’s Academy in Morocco.  How did you land here?

I just charted the settings where I was going to send my characters for their adventures and the Academy seemed the right place to open the book. Particularly since it would have been a convenient place for Alisa to send Sasha considering where she was stationed. But as usual with my stories, I wasn’t quite that cool and logical. I thought what if? and then I let the characters whisk me away.

Several books have been written about the “dark” side of thoroughbred horse racing, but you approached this in a unique way—the connection to the girl’s school, and the young “horse whisperer” in Sasha. What research was required for this? What was the most surprising thing you learned about that industry while writing this book?

I had no intention of writing about the “dark” side of racing. I’m sure those were wonderful efforts, but I was more interested in the storytelling of my characters who were involved with the horses. I became fascinated by the Nisean horses and I spent time researching them, but it was principally because Sasha was fascinated by them, too. I went where the story told me to go, and I loved every one of those horses. So did Sasha, as I’m sure you’ll agree.

We’re living in pretty chaotic times. How are you and your family holding up? Are you the kind of writer who has been distracted by what’s happening externally, or the kind who uses fiction to distract themselves from the current reality?

Chaotic times, indeed. I’ve been very lucky that my family is well and managed to survive all the madness that’s been going on around us. I know how lucky when I look around at the families who have suffered so much more. However, I don’t think any of us have remained untouched. How can we? We’re bombarded by the news and all the sadness around us. We can only hope it will pass and try to help each other through it. Yes, I have definitely been distracted by what’s been happening around me. But I also use my writing to create my own worlds as I’ve always done all these years. That’s another reason I’m lucky—my work gives me a certain distraction as well as purpose. Both are invaluable gifts during this crazy year. I recommend it. I hope all of you are well and as happy as you can be. Love each other and stay that way.

The Big Thrill is as much for writers—both aspiring and seasoned—as it is for readers. What advice can you share for writers who are struggling to “create” in these times?

First, love what you’re writing. Don’t worry about what the market tells you is popular. If you’re into your story, you have a better chance of the reader being into it, too. Get to know your characters before you start writing. If you’re lucky, they’ll help you write the book. Finish what you write. Don’t get bored or disgusted and toss it into a drawer. You can always rewrite later, and you’ll be surprised how much better it might be than you originally thought. If you still think it’s terrible, then you’ve learned something from the process. That book in the drawer isn’t going to teach you anything but failure.

Hopefully this is not the last we see of Alisa. What can you share about your upcoming projects?

I’m not sure about Alisa, but I did leave her in an interesting situation. I might be tempted to go back and see what she’s doing. Roy and I have a new Kendra Michaels book—Blink of an Eye—that’s going to come out next that we’re really excited about. I also recently finished a very different Eve book which has an intriguing premise that might stun you. And then there’s a book called High-Stakes…  So many books, so little time. Hope you enjoy all of them!