Writing What You Know 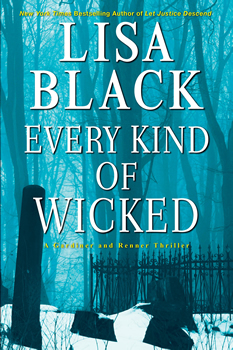 The old advice of “write what you know” might be much debated, but in the case of Lisa Black, there’s no question it’s the right choice. Black, a New York Times bestselling author, has penned a number of successful suspense series that feature a protagonist who’s a forensic expert—which she herself is.

Black’s new release is EVERY KIND OF WICKED, the sixth installment in the Maggie Gardiner and Cleveland detective Jack Renner series. It’s a gripping, fast-paced read that will more than satisfy Black’s existing fans—and attract many more.

It opens, fittingly, in a cemetery. The body of a young man is found on a snowy grave, with his heart shredded by a single wound. There are no clues to who he is—until a single key card leads Gardiner and Renner to a grieving but evasive girlfriend, who has much to hide. The links to the unfolding case become ever more complex until they connect to an investigation led by Maggie’s ex-husband. A series of violent events follows.

Black says she didn’t start out thinking of Gardiner and Renner as series characters.

“I began writing the first book, That Darkness, out of frustration because my agent didn’t like the book I had been writing, and the opening scene with Jack had been floating around in my head for a while,” she says. “I wrote maybe three pages and sent it off to her and she said, ‘I love it—write the rest.’” 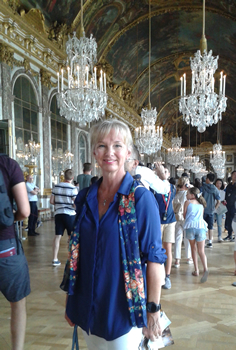 Problem was, Black had no idea what the rest was going to be. “I had a few moments of panic before its release, as well,” she admits. “I was afraid people would think I was ripping off Jeff Lindsay’s Dexter or glorifying violence. I’m still amazed that people like Jack and Maggie as much as I do and have gotten just as invested in their future.”

As mentioned, Gardiner is a forensics expert, as Black is in real life. The minutiae of forensic science as Black portrays it is as fascinating as it is engrossing.

“You have to have a lot of patience and decent attention to detail,” she says. “We also do not get treated as terribly valuable except by CSI fans! It’s funny the range of personalities just in my office—three of us are quiet introverts, and the other three are outgoing and outspoken and up on all the gossip.”

The challenges the job presents are also considerable. “The most challenging aspect is the stress of knowing that we have one chance to get the crime scene right, and that one mistake can be the difference between proving someone’s guilt or innocence or not. It doesn’t weigh heavily on the mind every single minute, but it’s always there.” 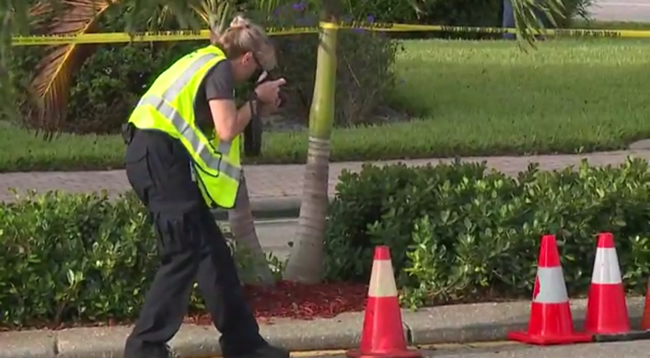 Black, a CSI and latent print examiner for a Florida police department, photographs skid marks after a fatal hit-and-run in spring 2019.

Black’s entry into the field of forensic science was via a career change. She was a personnel secretary for a decade before she finished a degree in biology and then got a job at the coroner’s office. The change was considerable. She’d had some opportunity to come to grips with such a different role. “I had visited several crime labs and done an internship, so I had been familiarized,” she says. But this was before the rise in popularity of forensics-based shows. “There weren’t all the forensic shows (both fictional and true-life), so I didn’t really know what to expect.”

It’s difficult to imagine a world where forensic science isn’t familiar to readers and consumers of crime fiction and true crime. But then it’s also remarkable that DNA profiling, the gold standard in forensic science, has been around for just over three decades. Black believes that its importance will only grow. 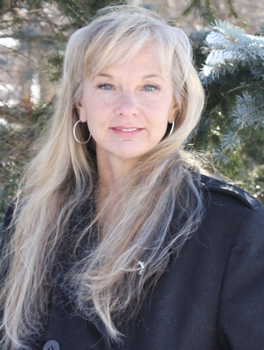 “I think ‘touch’ DNA will become more common as analysis gets quicker and cheaper (we do it now, but the state lab will only test the swabs if involved in a violent crime), and of course the capabilities of digital media analysis—computers, cell phones, video—will continue to expand,” she says.

Much of the plot of EVERY KIND OF WICKED centers on scammers of various types. The one that probably almost everybody can relate to is the telephone scam, where unsuspecting victims are conned out of their money, and sometimes in huge amounts.

“Like everyone else,” she says, “I‘ve had it up to yay-high with the constant spam calls.” Worse, “an elderly friend of mine lost money to the ‘your computer is sending out error messages’ con.” This set Black on a research mission. “I had to know: who are these people, where is all this money going, and why can’t they be caught? I’ve been studying it for years and I still don’t quite have it—once they get your credit card number, they use it to buy gift cards with stolen identities, then deposit the gift cards in offshore accounts—it’s very confusing.”

Fortunately, she points out, there’s a ray of hope on the horizon. “An overseas location doesn’t guarantee immunity anymore,” she says. “Numerous people worldwide and in the US have been prosecuted in only the past few years.” 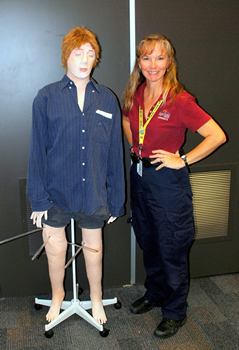 Black poses with Bob, the mannequin used by her police department in crime scene reconstructions. “We call him Bob because his weird ‘skin’ looks like Robert the Doll, who is a Key West historical artifact,” Black says.

Plot ideas like the telephone scam help Black to plan her mysteries. “Before I begin, I have to know who did it, how, why, who got killed, and any major twists. It’s always my goal to have a lengthy, in-depth outline with every single detail written out, but I haven’t yet made it. In fact, I’m getting worse. I still plan, but it’s mostly in my head.”

The plans Black is thinking through right now include more from Maggie Gardiner and Jack Renner.

“Maggie and Jack have bonded as a team, whether they’ll admit it or not, so they will be staying together,” she says.

Black is keeping busy in other ways too. “In the meantime, I’ll continue working the day job, blogging with the impressive Rogue Women Writers, and will be one of the Guests of Honor at 2021 Killer Nashville.”

And she provides a last, tantalizing hint for her readers. “I may be starting with a new series….”