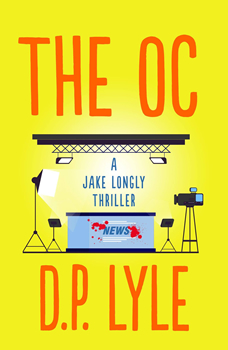 DP Lyle has charted a unique path through the world of thrillers. His latest, THE OC, is at once dark and comedic and thrilling.

This witty thriller is the next installment in the Jake Longly series. In this one, Jake is hoping for a few weeks of fun with Nicole in Orange County, California—The OC. But when he learns that Nicole’s friend, a local TV reporter, is being followed, he has to step in. Just like that, Jake and Nicole are thrown into the dark world of celebrity stalking. When the unknown enemy increases the harassment, Jake calls in the cavalry, his father Ray and Pancake. But Jake and his friends are not typical thriller heroes. Lyle admits that Jake is mostly a doofus. A lovable one but still a doofus.

“He’s not very ambitious,” he says, “preferring to run his bar in Gulf Shores, rather than taking on a ‘real job.’ Like maybe being a private investigator, which is exactly what his father Ray wants him to do. Become part of his organization. But Jake will have nothing to do with it. At least on the surface. Yet he consistently gets dragged into Ray’s world, where he is a stranger in a strange land and where danger lurks in every shadow. Yet Jake manages to find a slice of his quirky humor in every situation. On the upside, Jake is a people person. He’s an ex-professional baseball player, tall and good-looking, easygoing, and people gravitate to him.”

So Jake is a reluctant PI because regardless of how much he may protest, he repeatedly gets stuck in investigations. Lyle uses that fact to generate both humor and suspense. He is in fact a master of writing humorous thrillers, and he says it’s gotten much easier over the years.

“When I wrote the first Jake book, Deep Six, I had only a vague idea who he was,” Lyle says. “And I only had a single scene in mind. I had no outline, and I had no path to follow, which is 180 degrees from my earlier work. All I knew is that I wanted the story to be lighter and funnier than the darker stuff I had written before. So I simply sat down and started writing. One scene led to another, and that led to another and so on. I honestly didn’t know who the other characters would be, what the plot was, who the bad guys were, who would die, and exactly how it was going to play out in the end. What I discovered is that outlining actually stifled my storytelling.”

It seems Lyle works better if he just takes off down the road and sees where it goes. From that vague beginning sprang Nicole, who is more than just Jake’s partner in crime fighting. In fact, Jake and Nicole have become the Nick & Nora Charles of the 21st century. Nicole is a very special person.

“She’s beautiful but she’s also smart, clever, and can be as snarky as anyone,” Lyle says. “Particularly with Jake. In an older series, I had a similar relationship between my character Dub Walker and his ex-wife Claire, an ex-wife with benefits, in that they each also got their jabs in. But with Jake and Nicole, it’s even more so, and of course, laced with more humor. It’s interesting that I never saw this relationship as being directly developed from someone like Nick and Nora or anyone else, for that matter. Yet as I was working on the third book, it dawned on me that these characters were very much like Tracy and Hepburn. I grew up watching them in their early comedies as well as Lucy and Ricky, Ralph and Alice Kramden, and more recently Sam and Diane in Cheers. The prototype would be Tracy and Hepburn in Adam’s Rib, truly a great comedy.”

Another thing that makes this series unique is the cases they find, or that find them. Most mysteries and thrillers are centered on murder or some grand conspiracy. In this one, Lyle chose to tackle celebrity stalking, which is a big issue in California specifically, but is really pretty much universal.

According to Lyle, “It’s not just movie or TV stars. It’s anyone. Such obsessions know no bounds. I know several big-name, and not so big-name stars, who have had stalkers that generated great fear and anxiety. Some to the level that they broke into the victim’s home while they were present. Scary stuff. All you have to do is read the newspaper reports or watch TV news to see that these things happen repeatedly. And what we see is only the tip of the iceberg. There are thousands upon thousands of such situations that we never hear about. Most of the stalkers are known to the victim, but not always.”

From Lyle’s point of view, not knowing who is stalking you is even more terrifying. That’s why he used that in THE OC.

The good news is that Lyle has more stories in store for Jake and his friends. In fact, he’s already working on the sixth book in the series right now. And aside from an occasional change of venue, as in THE OC, he won’t change much of his successful formula.

“I like the dynamic between Jake and Nicole as well as Jake’s relationship with his father Ray and his best friend Pancake,” he says. “I think it’s a formula that works, and more importantly, it’s fun to write. I believe that everything should be fun, or you should do something else.”

In this case, fun to write translates into fun to read. To share that fun, laced with some legitimate thrills, you just need to open THE OC and start reading.