Exploring the Toxicity of Female Friendship 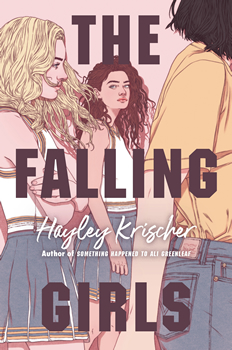 The power of friendship. Cliques. Obsession.

These are the themes that lurk within the pages of Hayley Krischer’s intoxicating new young adult thriller, THE FALLING GIRLS.

Inspired by a real-life murder—back in 2012, 16-year-old Skylar Neese was killed by two of her best friends—THE FALLING GIRLS is a story of high school friendship, and all of the ups and downs those relationships bring. It’s also the story about the cutthroat world of cheerleading.

It would be impossible not to make comparisons to Megan Abbott’s Dare Me, or the iconic ’80s film Heathers, but while Krischer’s book certainly is inspired by these cult classics, she puts her unique stamp on this suspense-driven tale of friendship and betrayal, once again showcasing her formidable storytelling chops.

In her first-ever interview with The Big Thrill, Krischer delves deeper into the inspiration and research that fueled THE FALLING GIRLS, explains the role her high school friendships played in crafting this story, and teases us with a glimpse of what she’s working on next. 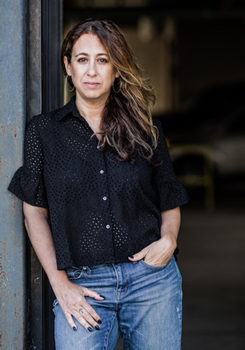 Female friendship is the main theme in THE FALLING GIRLS—along with all of the toxicity that sometimes comes with it. What drew you to this story? Was there an incident that inspired it?

My friends were the absolute main focus of my life in high school. They were my family, my outlet, my lifeline. I don’t know what I would have done without them. You can say that we were co-dependent, and maybe we were. But I tend to think most intense friendships tread that line. I wrote about friendships in THE FALLING GIRLS because I had read about the murder case of a 16-year-old girl, Skylar Neese. She was killed by two of her best friends. When the police asked one of the girls why, she said, “We just didn’t like her.” Couldn’t you just stop being friends with her? Did you have to kill her? It took me back to my relationships with my friends in high school. It was all or nothing. I’m not saying there is any justification in killing someone, but in the book, I wanted to explore that time when things were imploding, and what happened before that. What would it take for you to even consider that as an option?

The relationship between Shade and Jadis feels so authentic—I was quickly transported back to high school, where I recall several friendships that straddled that line of toxic obsession. While the girls are alike in many ways, they are also unique. Which character was easier—or more difficult—to write and why?

Shade was probably more difficult to write because she is most like me. She’s also nothing like me, in that she is focused, and when she decides she wants something, she goes for it. I was much riskier in my behavior in high school. I wasn’t as calculated. I wanted to make her the kind of confident person that I wish I had been at the same age. Jadis was a lot easier to write. She’s so needy, so insecure, so backwards in her thinking. I think it’s easier to write a super flawed character because you can have more leniency with them; you can be a little loose.

Living in Canada, I have a lot of friends with kids in hockey—and I’ve always felt that hockey moms can be pretty vicious. In THE FALLING GIRLS, that competitiveness is prominent with the sport of cheerleading. What is it about competitive sport that brings that out in the parents—and particularly when it comes to cheerleading? 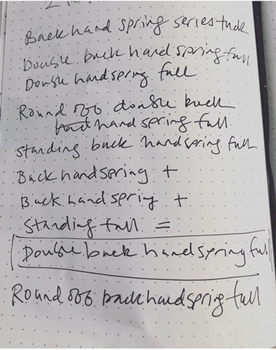 A snapshot of Krischer’s journal, in which she captured numerous cheerleading phrases and words to add to the book’s authenticity

Ah, yes. The cheer mom. I just wrote a big article on this topic in The New York Times. I think we all see ourselves in our kids. We want to cheer them on and help them succeed. Then there are parents who put their entire ego into their child. As one psychologist told me for my article, that kind of parent doesn’t see the child as having the success. They see it as their success. We see this in all kinds of competitive situations with kids. From football to violin. But with cheer, it’s a perfect storm: one, you have intense, high-risk athleticism that people admire; two, you have a sport that’s not even a “legitimate” sport in many people’s eyes. So the cheer mom is very different than the other competitive sport parents because they have this de-legitimacy that surrounds them, plus the hyper-feminine aesthetic that makes people tend to downgrade how serious the stunts are that these girls are doing.

On the subject of cheerleading, you dive into the sport and provide enough detail to make me question if you were a cheerleader. Part of your past or just really excellent research? And if yes, research, was there anything that surprised you as you were writing the book? 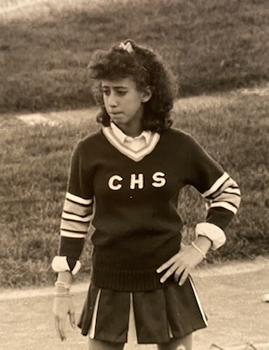 Krischer admits she didn’t necessarily fit the cheerleader back in her youth, but her past high school experiences did help to inform THE FALLING GIRLS.

I was a cheerleader, but a really bad one! I was totally uncommitted and mocked it. I didn’t show up to practices. I smoked cigarettes. I hardly smiled. I was a depressed and rebellious kid, and I had a natural ability for gymnastics (like Shade) but I didn’t understand the “happy” thing. I didn’t understand the “cheer” part. I know that sounds ridiculous, but it’s true. I would go home to my mom and say, “How can these girls be so peppy? I don’t understand.” So this is my apology letter to cheering.

I’m a journalist, so that’s where you’re seeing the research element. I’ll take that as a great compliment. Also, my editor, Julie Rosenberg, was a college cheerleader. So I would study YouTube videos and do a wild amount of research. Then Julie would read a paragraph in ten seconds and say, “You got this wrong, or it would be the left foot not the right foot.” We spent a lot of time getting it right. What surprised me is how these girls use their bodies as instruments, as weapons. They are completely committed to using their body however they need to to get the stunt right. Cheerleading is only second to football in percentage of concussions among all sports. That’s unreal. It’s very dangerous. I have tremendous respect for cheerleaders.

Several reviewers have compared THE FALLING GIRLS to Heathers, which was such an iconic movie. In your mind, did Heathers provide any of the DNA for your novel? 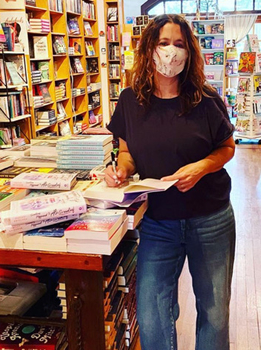 Krischer signing copies of Something Happened to Ali Greenleaf

Absolutely. Heathers came out when I was a senior in high school, in 1989. It was the first movie I had seen that really celebrated hating your friends or hating the people who claimed to be your friends. I remember my best friend and I renting Heathers; the two of us curled up in my bed watching it for the first time and being completely blown away. I think we watched it two more times that night. We’d act it out with friends. Make little skits. Call each other Heather. We were obsessed. It was the first movie that gave the outsider (i.e., Winona Ryder’s character, Veronica) permission to be horrible. Otherwise, in teen movies, the mean girls were horrible, and they were the ones who had permission to do terrible things. In Heathers, the outsider was in charge.

I named the Three Chloes, the gang of tight-knit cheerleaders in THE FALLING GIRLS, after the Heathers. I loved having the girls call each other Chloe. I wanted it to feel very claustrophobic and confusing with these three inseparable girls who swirled around you. It was also really important to show the dynamics of the Chloes just as there were dynamics of the Heathers. Ultimately, they were all very different.

The YA landscape has gone through tremendous change in the last few years—books tend to be edgier, more issue-driven. How do you think YA will evolve over the next five years?

That’s a good question. I’m seeing a lot of crossover novels in YA, so maybe there will be more of those. Or maybe those books will move into adult fiction. At the end of the day, I think YA has to have a glimmer of hope because you’re writing for children. I love the direction of how experimental YA has become. There are a lot more trans and gay characters in YA than I see in adult fiction. Kids are so much more open than adults.

THE FALLING GIRLS is tremendously suspenseful. The Big Thrill is as much for aspiring writers as it is for fans. What advice would you give to writers on keeping the tension taut in their work?

The trick is to keep the story going. I kept asking myself the question, What happens next? Then I also kept going back to each chapter to see if it helped push the next chapter along. There is a lot less time to sit and let the characters linger on their feelings. They have to notice and observe what’s around them and their own responses to other characters at all times. Writing this felt very heightened. Very ramped up. I would say that if it feels obvious to you, it probably means you have to shift something.

What can you share about what you’re working on now?

I’m writing something about Hollywood, and it’s set in a certain time period. I’m so excited about it, but I can’t say any more than that!