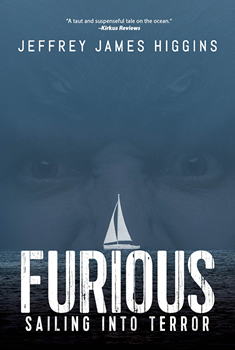 In his debut novel, FURIOUS: SAILING INTO TERROR, Jeffrey James Higgins takes you on a boat ride, literally.

Readers join Dr. Dagny Steele on a yacht sailing the Indian Ocean. The plan is for her to use this time to relax and recover from the devastating grief and depression she suffers from the sudden death of her infant daughter. On her return to Boston, she will fulfill her goal of becoming a pediatric surgeon. As Dagny begins to recover from her loss, the voyage turns into a nightmare. The yacht sustains storm damage, leaving Dagny not only trapped at sea but also fighting for her very life as she is hunted.

FURIOUS is told from Dagny’s perspective and in the first person, both of which are unexpected.

“I chose a female protagonist because my wife is the most courageous person I know. Her strength, morality, and bravery inspired my protagonist,” Higgins says. “A female protagonist also increased the stakes. Women are physically smaller than men, which means they must be more cunning during violent confrontations. I wrote the story in first person to bring the reader closer to the action and to make the danger more immediate.”

With so much of the book concerning the craft of sailing, Higgins used his personal experience to add to the plot of FURIOUS. He grew up sailing on Bare Hill Pond in Harvard, Massachusetts. Currently he sails a 19-foot Flying Scots on the Potomac River and if he earns enough money writing, he hopes to buy a sailboat.

Even the storm passages have a tie to his youth and ocean experience. With only one man who had open-ocean experience, Higgins and his father sailed with friends from Bermuda to Gloucester, Mass. They ended with a contaminated water supply, lost their navigation system, and their compass was off. They got lost and encountered powerful storms where waves crested above their mast as they dropped into deep troughs. It took an extra five days to make it home.

As an investigator for 25 years and with a master’s in criminal justice research, Higgins is no stranger to research. He made sure he triple-checked the language in the sailing scenes, because as he says, “I’m terrified of making mistakes with jargon or technical action.

“In the story, Dagny researches a potential threat on her laptop. I had to do the same work to write those scenes.”

Readers will find descriptions of what he found as Dagny’s research.

Higgins started as a newspaper reporter and has wanted to be an author since he was six. He’s written many articles and essays about law enforcement but finds fiction much easier to write. “If I need a plot twist, I make one up, and I can mold my characters and experiences to fit a traditional plot structure. It’s much harder to do that with nonfiction, where facts are not malleable.”

Writing is a daily exercise for Higgins. He begins by checking email and drinking “my first of many coffees” and then writes or edits for as long as possible, usually after four or five hours of deep concentration, accompanied by classical music. Physical exercise is in the early afternoon, and the rest of the day is spent working on the business of writing.

“I’m a serious plotter. I must understand what my story is really about before I write, so I outline the entire novel and know the major plot points and ending. Sometimes I map out every scene, but I always give myself room to develop my characters and create new conflict as I write. It’s important to know my characters’ wants and needs at the outset so I can create satisfying character arcs.”

While FURIOUS is his debut novel, he has written five thrillers, each in a different thriller subgenre. “That’s not the ideal path for building an audience, but I want to write stories I’m passionate about telling. Unseen: Evil Lurks Among Us is a vigilante crime story about terrorist infiltration. Rookie Homicide Detective Malachi Wolf investigates a string of murders in Washington, DC and uncovers both a vigilante killer and a terrorist conspiracy—making himself a target. My wife is one of the world’s leading experts on Islamic terrorism, and I used her expertise to write a fiction story about a real problem. Unseen is dark and gritty, and I hope readers enjoy it.

“My agent is reviewing Shaking, a small-town murder mystery. Battling bipolar disorder, Emily Miller lands her dream job as a reporter and returns to her New England hometown, but when her brother becomes a suspect in a gruesome murder, she must identify the killer to save her family, her job, and her life.

“I’m editing The Forever Game, a techno thriller about life-extending technology. I just started writing Forsaken, my first attempt at a serial. It’s about an army medic who is presumed dead and left behind in Afghanistan. I’ll publish it on Amazon Vella when that serial platform launches this summer. For National Novel Writing Month, I plan to start a new series about a special agent hunting terrorists and transnational criminals.

“My first manuscript was Blood and Powder, a nonfiction account of the first narco-terrorism case. It’s my personal experience from the World Trade Center on 9/11 to pushing my agency into counterterrorism and making the first narco-terrorism arrest. My literary agent has submitted my manuscript to publishers. Fingers crossed. Hopefully Blood and Powder will find a publisher soon. It’s a very personal story, and I’m eager to have people read it.”

When not writing, Higgins can often be found reading. “My read pile is enormous. I try to read different genres and about half of my list is nonfiction. Right now, I’m reading Locked On by Tom Clancy and Mark Greaney. Next up, The Forgotten Man, by Amity Shlaes.”

Jeffrey James Higgins is a former reporter and retired supervisory special agent who writes thriller novels, short stories, creative nonfiction, and essays. He made the first narco-terrorism arrest, convicted the world’s most prolific heroin trafficker, and convicted an Iranian spy. He has wrestled a suicide bomber, fought the Taliban in combat, and chased terrorists across five continents. Jeffrey has appeared on CNN Newsroom, Investigation Discovery, CNN Declassified, New York Times, and Fox News. He was a finalist in Adelaide’s 2018 Best Essay Contest and a quarterfinalist in ScreenCraft’s 2019 Most Cinematic Book Competition and 2021 Cinematic Short Story Writing Competition.