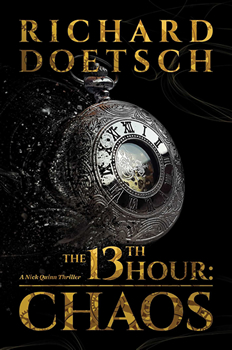 It’s a warm Fourth of July in the quiet New York town of Byram Hillsand. Nick Quinn watches as his wife and daughter die—along with his closest friends and family— in an unprecedented terrorist attack. Amid the disaster, Nick is approached by one of his closest friends, who is gunshot and dying. With his last breath, he hands Nick an antique pocket watch that possesses the power to rewrite the recent past.

The watch works by propelling its owner back in time, one hour at a time—a 12-hour journey for Nick to find out who’s behind the terrorist attack and save his wife, his family, his friends, and his town.

But just when Nick thinks he’s solved the crime and secured the future, he uncovers new levels of deception and betrayal, ultimately revealing a far more sinister plot with unexpected players and grim, global consequences. If Nick hasn’t set things right by the 13th hour, not only will his wife and daughter be lost forever to the chaos, but an even greater catastrophe will be unleashed upon the world.

This is the premise of Richard Doetsch’s THE 13TH HOUR: CHAOS, the thrilling stand-alone sequel to his bestseller, The 13th Hour.

Both books owe their existence to a traffic jam. Yes, Doetsch says he was sitting there just waiting, his “mind wandering and wondering what caused the delay.” He surmised someone looking at their phone caused a minor accident, which led him to wonder at how the delay subsequently impacted the lives of those affected. 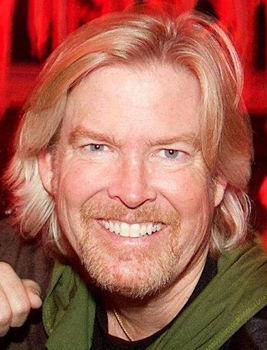 His imagination caught fire when he wondered: What if that moment of looking at that phone could be undone?

“About the same time I was thinking that I had never read a book that had gone backwards, that started at the last chapter and proceeded in reverse. Those two ideas, woven together with a lot of imagination and heart, sent me on a 30-day writing spree that resulted in The 13th Hour.”

The unusual feature of his 13th Hour books is the story starting with the ending and then moving forward in hour increments to undo the events in that last chapter. It reads as a mystery and a thriller, with some romance and humor thrown in. Much of what unfolds in THE 13TH HOUR: CHAOS is unexpected but somehow ties past, present, and future together.

Doetsch said that the idea for THE 13TH HOUR: CHAOS came unintentionally in the last few pages of The 13th Hour. What took him so long to write its sequel, he says, was his agent and the movie industry. The original idea was to have the movie and the sequel come out at the same time, but with deal after deal falling through, Doetsch went ahead and worked on THE 13TH HOUR: CHAOS.

Ironically, a new deal has been struck for a movie.

“You always want to give a satisfying ending to anything you write, plus you want to leave the reader wanting more. The fun wrap-up I came up with left the main characters, Nick and Julie Quinn, in a good place while at the same time provided an exciting twist of an ending that was the perfect starting point for what became THE 13TH HOUR: CHAOS.”

Because of the unusual way the story is written, Doetsch had his hands, or rather his head, full. “I had to write about the past, which you are creating as you go, yet all of that past has to inform the chapter you just came from. You are traveling in two narrative directions at the same time,” he says.

“I had to keep every single character’s arc and storyline clear in my head, even if they were just a minor character, as their interactions with the main cast would have a meaningful effect.

“I kept a detailed note pad of three different timelines: the book’s chapter timeline of going backwards; Nick’s journey both forward and reliving his day; and the natural timeline of the day in forward motion. Each was labeled by hour and chapter. It was so critical that everything be perfectly aligned because if one element was out of place, the whole story would collapse.

“It was a bit of a challenge as I had to remember the past which hadn’t yet happened in my mind, yet it had informed the present current chapter.

“It sounds confusing to write, but all of my brain strain paid off in a clear, fun storyline that while being a bit mind-bending, is an easily flowing narrative.”

To add to his writing, the self-confessed adrenaline junky conducts physical research in addition to the intellectual type. He feels “experiencing true excitement and fear provides me with a sense memory that I can translate into my characters and my stories to give them a true flavor of adventure. All this fun informs what you experience throughout CHAOS.”

On the intellectual side, there were more than a few rabbit holes this lover of learning and research went down. He covers dam construction, a host of professions, including the military, banking, teaching, and politics, 19th century England, and more to round out his story and characters for THE 13th HOUR: CHAOS.

The research is saved for the daylight hours while the night is for writing. Doetsch writes every night while surrounded by music. He has 15 different playlists with varying themes: action, love, adrenaline, rock and roll, etc. with artists running from Aaron Copeland and Gustav Holst to John Williams soundtracks, Hans Zimmerman, and Alan Silvestri to Led Zeppelin, Stone Temple Pilots, and Brad Paisley. Different sounds and genres for different scenes.

“I always make sure there is a tempo and rhythm to my writing. Pacing is so important, the buildup, the tension, the release, the calm, the quiet mystery—it all needs to be properly laid out to get the most captivating story,” he says.

Doetsch is clearly proud of THE 13TH HOUR: CHAOS and feels he accomplished what he set out to do: top the first book.

“I believe it is my job to keep the reader engaged and not know what will happen next,” he says. “If they have read any of my prior novels, the current one has to exceed all expectations. I am also so glad I made it stand on its own, so a reader could pick it up without reading the first book.”

Readers will be happy to know there will be at least two more novels in The 13th Hour series. “There is a very natural, unique idea seeded at the end of CHAOS that will lead in a whole new direction of fun and mayhem.”

Currently Doetsch is finishing a new novel that he says is a “very cool story, a very unique mystery/thriller, something truly fun, original and I haven’t seen done. I’m really excited for everyone to see it.”

Richard Doetsch is the author of seven international best sellers published in 28 countries with several of his novels acquired for film and television. He is an adrenaline junky with a passion for kitesurfing, skydiving, SCUBA Diving, triathlons, and defying gravity in ZERO G aircraft. His vocation and avocation are in constant flux. He has been a CEO, president, and director in the real estate world managing, creating, and preserving over 50,000 units of affordable housing with an emphasis on social and community programs.
He is married to his childhood sweetheart, Virginia, who is the impetus and inspiration behind everything he writes.