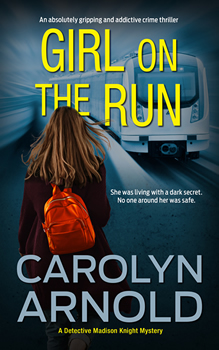 An ordinary Monday morning commute turns deadly when a gunman opens fire in the local train station. Detective Madison Knight rushes to the scene, but she’s too late for the victims. Two women are fatally wounded, including an expectant mother, and another woman is fighting for her life. But it is the face of one of the dead that has Madison seeing a ghost from her past. She looks just like Madison’s college friend Courtney Middleton, who vanished more than 15 years ago.

This is the premise behind GIRL ON THE RUN, the latest in author Carolyn Arnold’s Madison Knight series.

When Madison made her first appearance more than a decade ago, Arnold wanted to make sure she had a strong female lead, “especially when there were not a lot when I started writing her,” she says.

“Madison Knight was born at a time when the female detective took a back seat to her male partner in literature and the media. I wanted a woman in the lead. Someone who was take-charge and not afraid of speaking her mind. She would call it how she saw things, and not feel the need to sugar-coat it. Her priority was on finding justice for murder victims and being their voice.

“I love all these qualities about her, but I truly love how fiercely loyal she is to her friends and family. She also has a strong tenacity that seems to make her impervious to feeling fear.

“We’re very much alike, although she does speak her mind more openly than I do and she’s courageous. She’s gone up against the Russian mob several times over the series, and I’d go into hiding.” 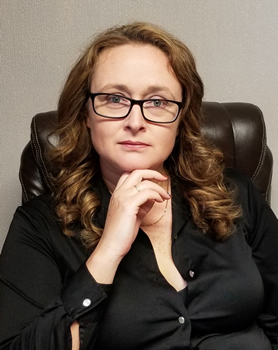 Contrary to having a character appear fully grown and demanding to have their story told, Arnold crafted a character with those qualities she felt worthy of a strong female working in a male-dominated world. Success is evident in the popularity of the Knight series with her readers.

While Madison might have been crafted to have certain characteristics, the key scene that drives GIRL ON THE RUN is based on a real event.

“I was at a coffee kiosk in a train station when things took an ‘interesting’ turn,” Arnold says. “A girl with a backpack swept past the counter and stole food from the refrigerated unit, and kept walking. Me and the other women in line all saw it happen and turned to each other about what we saw, and were working to get the clerk’s attention. Then this guy comes over—all hopped up—telling us to mind our own business. He also claimed to be a cop. In the moment it was rather unsettling, but after my adrenaline subsided, I was really shaken. Thankfully there wasn’t gunfire, but this guy was terrifying and probably one accusation away from doing something we’d all come to regret—if we’d lived to talk about it.”

Arnold added some gunfire and mystery to that event, and GIRL ON THE RUN was off and running.

The title was important to Arnold as she was looking for something that applied to various aspects of the story. “We have the girl with the backpack from the train station shooting, Madison’s college friend who disappeared 15 years ago, but then we have Madison herself. And her personal loss of her unborn child. She is running away—or doing her best to avoid facing the emotions this raises for her.”

In writing all of her novels, Arnold is very conscious of getting the facts straight, and this has led to her adopting the trademark: Police procedural respected by law enforcement. She says, “Given how much I respect law enforcement, one would think I had family members who served but I don’t. I just admire what they do—how they are willing to put their lives on the line for the people, for justice. Justice is something I believe is intrinsic to all of us.”

With multiple series on the go, Arnold has started cataloguing a series bible for each and is also “doing a snapshot synopsis after I finish a book that touches on key points, such as what challenges the characters had, how they overcame them, and this changes them for future books.”

While this helps with her writing, she still finds characters from her other series creeping into her current projects. Fortunately, they’ve been caught in the editing process but with a laugh, she says, “Life does get fun!”

Carolyn Arnold is an international bestselling and award-winning author, as well as a speaker, teacher, and inspirational mentor. She has several continuing fiction series and has many published books. Her genre diversity offers her readers everything from cozy to hard-boiled mysteries, and thrillers to action adventures. Her crime fiction series have been praised by those in law enforcement as being accurate and entertaining. This led to her adopting the trademark: POLICE PROCEDURALS RESPECTED BY LAW ENFORCEMENT™.