Listening to the Voices in Her Head 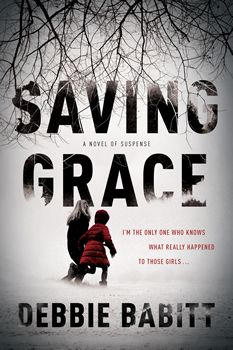 Author Debbie Babitt describes herself as having had many creative incarnations: playwright, drama critic—not to mention copy director for two major Manhattan publishing companies. Yet it was Babitt’s experience as an actor that she found most essential in writing her debut, SAVING GRACE.

Thanks to her performer background, it’s the voices of Babitt’s characters that come to her first. The native New Yorker will readily admit that the Southern location of her novel is not one she had a personal connection with, but the 11-year-old girl from Arkansas, who would become Babitt’s protagonist Mary Grace Dobbs, held the author’s ear firmly.

The voice of this particular little girl would be hard for anyone to ignore.

SAVING GRACE follows Mary Grace, shown in parallel as the adult sheriff she will become, as she struggles with loss in a community full of secrets. Haunted by the disappearances of her classmates in childhood, her nightmares brutally resurface when another child vanishes 24 years later. In a journey that’s both electrifying and terrifying, Babitt follows Mary Grace down a shadowy path—the end of which readers won’t easily forget.

Babitt kept speaking to Mary Grace to discover more of the novel’s fictional setting, a town held in the grip of religion, aptly named Repentance. “Little by little, she reveals her world,” Babitt says. “Once I have enough facts, I do my due diligence—research. Because Mary Grace loves her town and describes it so vividly, I had a good sense of what kind of place it would be.

“I based the fictional Repentance on an Arkansas town called Jasper. For me, the creative process is akin to playing cowboys and Indians as kids. We believe completely in the reality we are creating/living. In acting, we call it the ‘Magic If.’ You have to imagine you are this person living in this specific time and place.”

Reflecting on the finished novel, the author feels another location was at work in her dramatic writing process: Maycomb, Alabama, of Harper Lee’s To Kill a Mockingbird. “I didn’t consciously set out to parallel Mockingbird when I began writing SAVING GRACE. But so much about creativity is subjective and often, I believe, subconscious. So who knows?

“There did come a time during the writing of the book that I realized my novel contained some similarities to Harper Lee’s novel: The recluse living in the woods (whom the town kids have dubbed the Boogeyman of Repentance); a Black man falsely accused of a crime; a character in the story who follows the Baptist sect known as Foot-washers.

“And of course racism in the South, although Repentance is more a faith-driven, superstitious town. It’s the White supremacist cult that calls itself the Salvationists rapidly gaining a foothold in the South that many folks in town really fear.”

Many would be surprised to see SAVING GRACE, a dark and twisting thriller, compared to Lee’s writing. Babitt, however, happily pushes through the confines of her genre.

“I feel that SAVING GRACE is more than a thriller. I have already received reviews that say the novel is both a coming-of-age drama and an important book because it touches on social issues including bullying, suicide, mental illness, racism, sexuality, classicism, and discrimination.

“I hadn’t consciously thought about [Lee’s] novel when I set out to write SAVING GRACE. But To Kill a Mockingbird is a beautifully written, disturbing, and deeply moving dramatic rendering of a specific time and place. The difference between Lee’s novel and my own is that the adult Scout looks back on her childhood (maturing from six to almost nine during the course of the novel) and Mary Grace tells us her story both as an 11-year-old and 24 years later as a woman.

“True, Mary Grace is looking back on that tumultuous, terrifying period in her life. But she is also living in the present as a single mother and the first female sheriff of her town as she investigates the disappearance of a 12-year-old girl that eerily echoes the disappearances of two sixth graders in the past.”

As for the writer’s next project, there’s a new voice in Babitt’s ear.

“I am currently writing my next novel of psychological suspense. This story features a Manhattan Supreme Court judge presiding over the trial of a rapist/murderer,” she says. “The Honorable Alice McKerrity started talking to me, and I took notes. I’m still listening!”