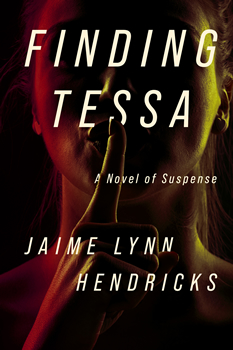 Most writers have, at one time or another, been sagely advised to “write what you know.” For author Jaime Lynn Hendricks, FINDING TESSA couldn’t be further from her, or her characters’, worlds of the familiar.

Hendricks’s debut novel follows Jace and Tessa, a young couple who appear to be in love, with nothing to hide. But looks can be deceiving. When Jace comes home to find Tessa missing, he becomes Suspect Number One. Tessa, meanwhile, finally feels safe having set up her abusive husband to take the fall for her disappearance.

This scheming web of trauma and subterfuge is not reflective of Hendricks’s own background, she is keen to clarify. “I tried to find a character and a theme that had nothing to do with me,” she says. “That’s why it’s called fiction, right? I grew up with this idyllic suburban life—loving parents, cookies after school while doing my homework, family dinners followed by Scrabble—and I wanted to explore something that was outside of my wheelhouse.

“I’d read a lot of other thrillers about how bad suburban life could be if you didn’t have that perfect nuclear family, and if you were sent into a system that didn’t have your best interest at heart. I took all the worst things I read and went from there. I wanted it to be a total contrast.” 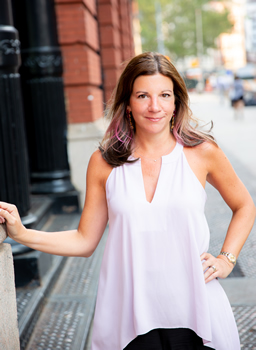 The author was prepared to travel even further into the unknown with her improvisational, or “pantser,” approach to the writing process. “I don’t outline at all. I’ll get an idea and go from there. I literally have no idea what’s going to happen from one chapter to the next, which sometimes makes for hard writing sessions.

“At the same time, it’s exciting! Because I don’t box my characters into an outline of how I think they should be, sometimes they totally shock me with the things they do, and then it takes the story on a completely different trajectory than what I had in the back of my mind. Writers are also notorious for ‘shower thoughts,’ and it’s a real thing. I changed my mind about the ‘bad guy’ in FINDING TESSA three times while I was washing my hair.”

The novel’s dual point of view might seem an added complication, but Hendricks took this challenge in stride. “I loved both Jace and Tessa. I tried to keep them both suspicious and both likeable at the same time—that good ole unreliable narrator. Some people either love or hate a character. My part was making both of them relatable and likeable while also questioning their motives and their secrets. 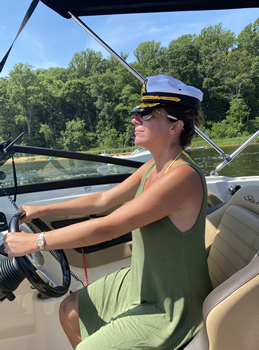 Hendricks enjoying her friend’s boat on the Jersey Shore.

“For me, I love to read a character that’s flawed, or even terrible—that’s exciting. I don’t necessarily root for them, but unless they kick puppies, I’m turning pages to see what messes they get into or how they get out of them,” she says. “I think I got both Jace and Tessa into some doozies. Jace is the one who looks good on the outside: good looking, stable job, modest home, doting husband. But are all of those true once you find out what’s happening? Tessa, on the other hand, is a mess from the jump, but is that real or by design?”

There is one point of the novel, however, Hendricks planned from the beginning: the shocking twist. As an avid reader and great admirer of thrillers, she was keen to, as she herself puts it, “‘twist’ the classic twist.” Hendricks says, “I was like… hmmmm. What have I never seen before? So, I thought of that twist and I made it the central focus around the entire novel, then just said, ‘Okay write around that’—like it was easy—it wasn’t. It was difficult because I go back to my pantser ways.

“Once that twist happened about a third of the way through, I had no idea where the story was going to go, or what was going to happen, or who was going to be responsible. I kept moving the story forward and then the characters told me how it was going to play out. Once it started to flow, it was much easier, and I completed the entire first draft in about ten weeks. And I felt I was able to say, ‘Okay I think I have something original.’” 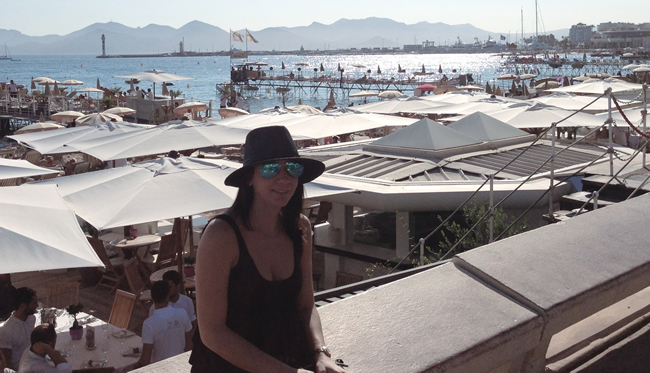 Landing on a story idea that flows freely is crucial to this author, which is what made the disruption of the past year often challenging. “My regular daily routine, with my coffee and writing and my dog, was just ‘off.’ Sometimes that made it harder for me to remember what I was supposed to be doing. On the other hand, a few ideas crept in, and when that happens you have to go with it, so I did. I wrote my third and fourth novels in the past 12 months.

“Since February, though, I’ve started three manuscripts and trashed them all around 10-12K words. They either didn’t have legs, or I couldn’t get into them. I recently started another, so we’ll see how that goes. I’m happy with the two completed ones.” 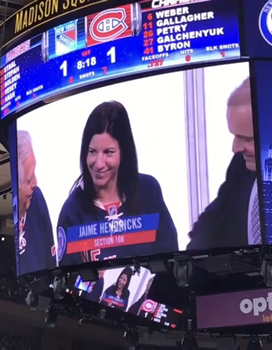 Hendricks on the ice with her favorite hockey team, being honored as a longtime season ticket holder.

Hendricks’s next title will see her go back to her past—her writing past, that is, as the novel promises just as many otherworldly twists and turns as its predecessor. “My next book, which will be my second published, was actually the one written right before FINDING TESSA, and it was the one that got my agent.

“It Could Be Anyone comes out next spring and is more of a commercial thriller/mystery revolving around a terrible groom who drops dead on his wedding day. He’d been secretly blackmailing the entire bridal party. What did they all do that they’re trying to keep hidden, and who worried enough about being exposed to kill him?”