Truth Be Damned, and So Is the Woman 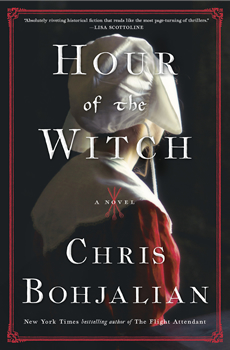 “This may be the hour of the witch. But the Devil? He most definitely wears breeches. The Devil can only be a man.”

This is Mary Deerfield’s belief.

In HOUR OF THE WITCH, bestselling author Chris Bohjalian takes readers on a treacherous journey through 17th-century Puritan New England, when a woman proclaiming her rights could end up hanging from a noose.

Loosely based on a factual case, Bohjalian “came across a reference in the records of Boston’s Court of Assistants from 1672: a woman named Nanny Naylor successfully sued her husband for divorce on the grounds of cruelty.” He explains that he “was looking for a way into a novel of suspense set in the 17th century, but one that I hoped would chart new ground.

“My best work is powered by dread. My books are slow burns. It’s not ‘action’ in a conventional sense that keeps readers turning the pages, but rather a simmering anxiety. And many of the Puritans lived with anxiety and dread: Satan was as real as your neighbor, and they fretted constantly over whether they were saved or damned.

“When we think of New England’s history of hanging people for witchcraft, we beeline straight to Salem in 1692. But in 1656, the governor of Massachusetts had his own sister-in-law hanged as a witch. The first real witch hunt was in Hartford in 1662—three full decades before Salem. One thing many of the women executed as witches had in common was that they were smart, opinionated, and viewed as outsiders: sometimes they saw through the patriarchal hypocrisy that marked a lot of New England Puritanism.”

In the novel, 24-year-old Mary Deerfield has endured her older husband’s cruelty for the entire five years of their marriage. She’d become adept at hiding the bruises that Thomas is careful to leave close to her hairline. Mary knows that when he comes home from the pub “drink drunk,” she must be on high alert for an outburst that might cause him to abuse her.

Thomas had hit her more than a dozen times, hurled her into the hearth, and thrown steaming-hot stew on her. “Mary was a prisoner of a man who had within him a monster.”

After Mary’s father, an importer of goods from England, gives her the newest thing from Europe—forks with three tines that are used for eating things hard to pick up with a spoon—Mary finds the forks buried in her yard. She doesn’t know who buried them but believes someone is trying to put a spell on her. When her 18-year-old servant Catherine sees Mary putting the tines back into the ground where she found them, Catherine believes that Mary is the one who buried them, and that she’s cursed by the Devil.

When Thomas stabs Mary’s hand with a fork even though he’s sober, she realizes that she loathes her husband. She knows she must get away from him, and the only way is to petition for divorce because of cruelty. There begins Mary’s journey to divorce her husband. She must convince the Court of Assistants who will hear her petition that Thomas has been cruel to her. But Thomas insists his “discipline” of Mary was always educational, a husband trying to teach his wife.

According to Bohjalian, the story of Mary Deerfield is fictional. “The man Nanny Naylor divorced, Edward Naylor, was a beast. He was thoroughly despicable, and I imagine you had to be a horrible human being for Boston’s all-male Court of Assistants to grant a woman a divorce on the grounds of her husband’s cruelty in the 17th century. It happened exactly one time.

“But Thomas Deerfield, the abusive husband in my novel, is not Edward Naylor. Thomas is a monster, but monsters and beasts (and nightmares) come in all shapes and sizes. Witchcraft did not figure into the actual divorce trial in 1672, and it was allegations of witchcraft that interested me.

“Likewise, my heroine, Mary Deerfield, is not Nanny Naylor. The idea of the divorce was a way for me to create a courageous and strong heroine who’s willing to risk everything to regain control of her one rare and beautiful life.”

Mary’s infatuation with Henry Simmons, a young entrepreneur in the community, along with her practice of sexually satisfying herself alone at night, causes her to consider that maybe the Devil has in fact tainted her heart. But she must still escape Thomas’s brutality.

The trial becomes an assassination of Mary’s character and the beginning of the town’s belief that Mary might indeed be an agent of the Devil. Soon, she’s fighting for her life.

Bohjalian says that although “HOUR OF THE WITCH is set in 1662, it is, by design, among the timeliest novels I’ve ever written.”

And although the novel is fictional, Bohjalian hopes that his recreation of a Puritan trial reflects accurate elements. “While the Puritans were solid record keepers, they didn’t have court stenographers. We don’t have verbatim transcripts of most 17th-century trials.

“I hope the way I’ve described the trial proceeding is fundamentally accurate. I had the good fortune of becoming friends with L. Kinvin Wroth, professor emeritus of law at Vermont Law School. We first had lunch 20 years ago, when I reached out to him to discuss the novel I was contemplating about a Puritan woman’s attempt to divorce her husband. He pointed out the articles it was critical I read about 17th-century law and the first New England courts. He read a draft of the novel and patiently corrected my most egregious mistakes.”

There is a specific message for readers in HOUR OF THE WITCH.

“Although set in 1662, I doubt my readers will miss the irony when one of the men on Boston’s Court of Assistants calls Mary Deerfield ‘a nasty woman.’ I want my readers to see the similarities between our world then and now,” Bohjalian says. “I’ve loved it when early readers have said things like, ‘Wow: it’s The Crucible meets The Handmaid’s Tale.’”

Even though women have gained rights and freedom since 1662, Bohjalian acknowledges there are still parallels in today’s world with the prejudice Mary faced in her Puritan community. “Men still abuse women and take them for granted. And, yes, men often vilify strong, smart women. Whenever a woman is a corporate CEO, or a successful politician or legislator, we see the double standard and the ways women are maligned.

“The Puritans came here with what they thought was a noble goal: to build a city upon a hill that the world would smile upon and make their God proud. Instead, they started the genocide of the indigenous people who lived here and showed that good intentions are no match for the robust hypocrisies and contradictions that live within the human heart.

“When the Puritans were at their best, they did those things. When they were at their worst? It wasn’t pretty. They used the stocks the way we use Twitter: for public shaming.”

Bohjalian provides a sneak-peek at his next novel.

“I wrote The Lions of Hollywood during the pandemic. It arrives in October 2022.

“And because I didn’t know what the ‘present’ would look like in 2022, my next book is also historical fiction but is set in 1964 (a year I don’t recall, but I was alive). It’s definitely a thriller.

“I loved Quentin Tarantino’s Once Upon a Time in Hollywood and decided I wanted to write a Hollywood novel, but with a twist. The world’s biggest movie star finally gets married and brings her entourage with her on her honeymoon safari. But it all goes to hell fast, and it’s quite clear early on that an awful lot of Hollywood royalty is going to get eaten or otherwise killed.”

What advice does Bohjalian have for other writers?

“Write as often as you can, every day if possible. Write in the genre you love. If you love science fiction, write that. If you love thrillers, write thrillers. Skim a dictionary and pick out interesting words you’ve never or rarely used. Do your homework: research always makes my books better. And read voraciously. I love it when I’m reading a novel so good I’m left with an inferiority complex.”

And finally, Bohjalian shares something about himself his fans might not already know.

“As a boy, I lived for the Alfred Hitchcock fiction anthologies, the small paperbacks filled with short stories that were awash with things that go bump in the night. I had dozens of them and kept them on a special shelf in my bedroom, treating these inexpensive little books with totemic reverence. I think it was perhaps inevitable that the first short story I ever wrote that still exists—I believe it is from the third or fourth grade—ends, ‘The dripping stopped, and the vultures had their meal.’”