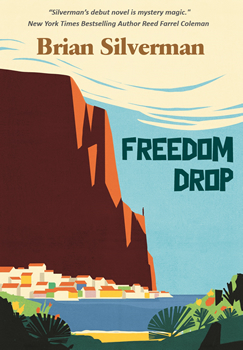 Full disclosure: Brian Silverman is a longtime friend. I’ve known him so long, I don’t even remember the first time we met. But I do remember where: on a softball field in Central Park, over three decades ago, where we faced off against each other in the New York Publisher’s Softball League. I played for Dell. Brian played for the Putnam All-Prose. There’s no way I can recall who won that first game, but our teams became arch rivals. Herewith a second full-disclosure: His team won more titles than we did, but by the time the league ended, we were gaining on them.

Even though we played for rival teams we became friends, bonding over a combination of sports and books. But the roots of our friendship go back even further. Brian’s father, Al Silverman, was a former editor of Sport magazine, the very same magazine I eagerly waited to receive every month.

FREEDOM DROP, set on the fictional Caribbean island of St. Pierre, is Brian’s first crime novel. In it, he introduces us to Len Buonfiglio, a transplanted New Yorker with a somewhat mysterious past who opens a sports bar/restaurant on the island and soon becomes deeply involved in the lives of his island neighbors.

With his background in travel and food and drink writing, Silverman has crafted a compelling story that introduces the reader into the lush world of a small island and its people. He talks about it more in this The Big Thrill interview.

Tell us something about your background.

I grew up in White Plains, NY, the middle of three boys. We were all born within four years of each other, so it was hectic. My mother doesn’t remember it as such, which is a good thing, but we fought, as brothers do. At times it was like Moe, Larry, and Curly going at it. That eased up once we hit our teens and went our own different ways.

My father was a writer/editor. His influence was more in his love of the written word than anything else. He wrote nonfiction, sports mostly. (Al Silverman was the author of I Am Third, with Gayle Sayers, made into the popular movie Brian’s Song, and he was also an esteemed book editor at Viking.) We collaborated on a sports anthology, something I’m very glad we got to do. Though I greatly admired what he accomplished as a writer and editor, I always wanted to do something he never did, which was create fiction. My mother, besides running the household, was a magnificent artist, and was as much of an influence as my father in her passion to create art.

Where did you attend college and what did you do after graduation?

I played football at UConn, but after a couple years of limping around campus, my interest drifted toward books and movies, so I gave up the sport. The summer before my senior year, I went to Chicago and got to hang around the film set of The Fury, directed by Brian DePalma. I was hooked and started writing screenplays.

After graduating, I worked in publishing as a contracts manager. I would get up early and write screenplays. My scripts were shopped around, and I was teased with interest but never anything concrete came of it. I even lived in LA for a year in hopes that would make things happen. Maybe they would have, but I couldn’t stick out the LA lifestyle.

I love the short fiction of Irwin Shaw and John Cheever. But I also enjoy reading the likes of Richard Matheson, Ray Bradbury, and Jack Finney. The way they crafted short fiction was a huge influence to me. I very much admire writers from other parts of the planet; Jorge Amado, Mahfouz, Naipul, Yukio Mishima, and Marquez. I like going places when I read. It’s an inexpensive way to see the world. The constant throughout my adult life is my love of crime fiction, generally hard boiled. I gobbled up Elmore Leonard, Jim Thompson, Charles Williford, Chester Himes, Lawrence Block, and Robert Parker, to name a few. Of contemporaries, Walter Mosley and George Pelecanos stand out.

I’m not a prolific writer. I know the old adage that you need to write every day. I never have, though when I was younger I did try. With two boys who are now finally of age when they’re almost out on their own, the excuse that they’re keeping me too busy to write is gone. I do feel that, even if you write a post on Facebook, or an email that you create to a friend, you are writing.

Tell us about your career as a travel writer, which has a lot to do with the setting of the fictional island of St. Pierre.

Before turning to fiction, I spent many years as a travel writer. My particular focus was the Caribbean. I’ve traveled to just about all the islands. I like some more than others. The spit of land with fancy resorts and just beaches never interested me. I liked traveling to islands that were more than just the beach. I liked to dig into the culture of the island, whether it be the food, music, drink, and art, to see what distinguished it from another. I did pattern St. Pierre loosely on a combination of islands. I’d rather not disclose the island it mostly resembles. But it’s got those elements I loved the most about certain islands; its own quiet pace, not overly built up or dependent on tourism, a small-town feel really where pretty much everyone knows everyone and much of the feel is almost from a different era. I feel setting is a character unto itself…or can be. I wanted to try to create that in FREEDOM DROP as well as the stories I’ve written that take place on St. Pierre.

Tell us about Len.

Len Buonfiglio had been brewing for a very long time. After 9/11 we threw around the word hero a lot in terms of the first responders, the military, and others. I think often about that word, hero. Does anyone ever prepare to become a hero? It’s usually a reaction to an event. We love our heroes. But in reality, a hero is a human with all his or her many flaws. What if the act of heroism was precipitated by an unseemly or disreputable act? What if one led to the other? I wanted to do something with that conflict and created the character of Len. I began with a short story that was not a crime story; more a mystery of the heart that took place in St. Pierre. I first established characters in that story, titled “Pane di Casa.” My wife, (Heather Jackson, a longtime book editor and now a literary agent) for years, knowing my love of mystery fiction and my own writing style, believed I could write mysteries. As stubborn husbands do, I scoffed at her advice. But finally, after years of ignoring her very wise instincts, the time came when I was ready. I had created the character I wanted and thought I’d have that character try to find acceptance on this small island he has adopted, Eventually, he begins to help people in circumstances where the police cannot. My first St. Pierre crime story, “Breadfruit,” published by Mystery Tribune, was selected to be included in The Best American Mystery Stories of 2018. Another, “Scotch Bonnet,” was listed as one of the notable stories in The Best American Mystery Stories of 2019.

The stories were always, in my mind, a precursor to a novel. I wanted to experiment with the characters and create the setting through the stories before I began the longer process of writing a novel. After five St. Pierre stories, I finally began my work on FREEDOM DROP.

Len has a secret that drove him out of New York City, but you don’t fully address it in the novel. Why?

In an early draft, I did reveal what drove Len to leave New York. I had the idea to break up segments of the first-person narrative of the story with a third-person account of the trauma in New York. After finishing the early draft, I felt the inclusion of that narrative was disruptive to the flow of the story. Instead, I give away bits and pieces within the story. I did not want to spell it all out because I would like to keep that mystery going in potentially other St. Pierre/Buonfiglio books. What I took out of that early draft I formed into a short story, “Land of Promise,” published in Mystery Tribune and chosen to be included in the Best American Mystery and Suspense Stories 2021.

What does the title refer to?

In my travels to the Caribbean, there are more than a few islands that have tales of how enslaved African people and before them, indigenous people, would rather die than submit to slavery. They did this by plunging to their death off of cliffs. I incorporated that legend into the lore of St. Pierre and patterned the novel and Len’s search for the truth in the death of an American journalist around that symbolic place.

The book deals with the relationship between Len and his teenage daughter, one of two children he’s left back in the US. What drove you to explore this relationship?

Despite having two boys, I wanted to write about a father-daughter relationship. It’s something I think about, having grown up in a pretty much all-male household and creating one of my own. How would I handle having a daughter? What would be the different dynamic? I have no idea if I have a clue, but it was something I wanted to tackle in fiction.

Since finishing FREEDOM DROP, I want to get away from St. Pierre for a bit, and I’ve written a few unrelated, mystery short stories. Now I’m ready to return to the island and the world of Len, Tubby, and the Sporting Place with a sequel.