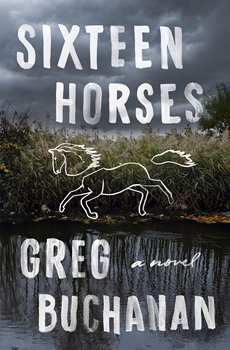 Greg Buchanan’s debut opens with a bone-chilling puzzle set by an unknown assailant—a puzzle that unfortunately involves the subject of the novel’s title: SIXTEEN HORSES.

Local police detective Alec Nichols discovers 16 horses’ heads on a farm, each buried with a single eye facing the low winter sun. Forensic veterinarian Cooper Allen is called in to help uncover evidence of a chain of crimes in the dying seaside town—disappearances, arson, and mutilations—all culminating in the reveal of something deadly lurking in the ground itself.

Buchanan is no stranger to the world of puzzles and games. Already established as a critically acclaimed writer for video games, he credits the medium as having a considerable impact on his novel writing process. “[It] certainly contributed to the way I approached the atmosphere and sense of history in SIXTEEN HORSES,” he says.

“I have written for works that are similar to ‘choose-your-own-adventure’ films, where you see a narrative unfold and can change the direction of a plot; I’ve also worked on narrative elements for works that don’t really require story at all, but where, in the middle of shooting or running around, you’ll get snippets of plot that help contextualise the player’s activity.

“I’ve said on multiple occasions that not only are games a weird medium for story, they’re one of the only forms I can think of where an audience cannot be assumed to even care about the narrative. They might begrudgingly engage in your story writing just for the purpose of getting through to the ‘fun bits’, for example.”

While some writers may feel that being hyper-aware of their audience’s attention spans would be maddening, Buchanan has embraced the challenge, even in his novel writing. “When I write a novel, I don’t forget this—nor do I forget the purpose of scenes, what the reader is going to be seeking out experientially (if it’s a crime novel, then they’ll be wanting clues and the revelation of clues, regardless of what else I’m doing).

“I’ve come to enjoy the necessarily brief and enigmatic style of much game-storytelling. I use this sparse, almost staccato effect in my prose style as a source of atmosphere and tension, helping drive everything else forward.”

It was a love of books, however, that came first, Buchanan clarifies—reading and writing sci-fi and fantasy stories before he ever owned a game console. This love was then solidified in a somewhat unexpected way: “When I was 12 years old, I was hit by a car outside my school.

“My father—understandably concerned—drove me to hospital where we waited a while to be seen. All he had in the car were some Stephen King books, among them On Writing.” The young Buchanan luckily escaped with only a few bruises and left the hospital with a new passion cemented. “Following the process and joy with which Stephen King talked about [writing]—a man who had also strangely enough been hit by a car shortly before the book’s writing!—made me want to do nothing else.

“I spent years trying to understand the novel form in my own way, ultimately doing a PhD at King’s College London focusing on identification and ethics in characterisation. I’m fascinated by the structure and sequential flow of prose novels—the only medium where characters can only be communicated word by word rather than with multiple sensory impressions at the same time, unlike in film, comics, or many games.

“This process that feels so natural to us is in many ways extremely unnatural, and in my mind, there are huge as-yet-untapped possibilities to explore and experiment with this in terms of atmosphere, meaning, and emotion.”

While literature and games have shaped Buchanan’s work greatly, the 1975 film Picnic at Hanging Rock is also named by the writer as being an important influence for SIXTEEN HORSES. Cinema and television, he says, have influenced his craft much more than many would expect. “In SIXTEEN HORSES, there are multiple moments where I tried to experiment with film-like effects in my structure.

“Frequently this comes in the form of what are called ‘jump’ or ‘smash’ cuts between scenes—in my book, I represent this on the level of section breaks and cut-off sentences at a few pivotal points in the narrative. In the published draft as in the original draft, there are section-break markers to separate portions of chapters—but for these jump-cut sections, I originally had no markers at all, but an actual tangible gap on the page with a very faint Oulipo-ish, House of Leaves aspect.

“Likewise, the cutting between multiple characters and movement through time is an attempt to do something prestige TV does really well—showing personality, motivation, and history through exteriority and the juxtaposition of scenes, rather than spelling out to the audience precisely why you’re seeing what you’re seeing.”

Yet it was a field outside of the writer’s vast learning and experience that was needed for SIXTEEN HORSES, in particular for the character of Cooper Allen, the forensic veterinarian. “I have quite a personal connection to the field of veterinary medicine—my fiancée works as a vet and many of our common friends are vets, giving me an insight into what it’s like to be in this profession and the kinds of experiences veterinarians often have.

“Although there’s a great sense of reward and service in the field, there’s a dark side to it that’s rarely been explored in fiction or pop culture—a high suicide rate, neglect cases, animal abuse that vets are often the first to see. With the novel’s protagonist Cooper, my goal with her was to create a three-dimensional vet who engaged readers with both the positives and negatives of this profession.

“Cooper is clearly intellectually stimulated by the work she does but is haunted by the sights she’s witnessed and the decisions she’s had to make. At some point in her past she switched from regular surgical work to become a forensic specialist, a field I learned a great deal about during a training course at the University of Manchester. If this novel was going to treat animal death as seriously as human death, it only made sense to have a specialist.”

As for Buchanan’s next project, he reveals that he is currently working on two separate novels side by side; one that follows a character from SIXTEEN HORSES in less of a police procedural frame, the other a cross-genre crime work that the writer assures will “surprise everyone a great deal.”

The endeavour of working on two projects at the same time is a feat that Buchanan takes lightly: “[it keeps] me fresh, curious, and agile in my learning […] sparking connections I would not have thought of otherwise. It’s important to me I keep growing and trying new things.”

For Buchanan, that’s the joy of the game.