Staking Her Claim in Psychological Suspense 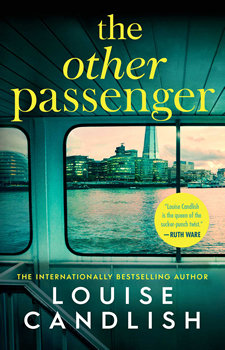 Londoners tend to have a somewhat love/grumble relationship with their Tube network. There’s plenty of love for a half-empty carriage and a welcome seat. Not so much when stuck between two stations in a heatwave or when a line goes down, leaving passengers to scramble for an alternative way of getting from A to B.

You won’t hear much grumbling from author Louise Candlish about one particular outage. On the day in question, she was headed for the O2, a big arena in southeast London. The Tube had packed up, so she took the Thames Clipper—the catamarans that ferry commuters from east and west into Central London. “Within twenty seconds of taking my seat,” she says, “I knew I’d found the perfect setting for my next novel.”

That novel is THE OTHER PASSENGER, a gripping, twisty psychological thriller told from the point of view of Jamie Buckby, a middle-aged river bus commuter. Jamie is disembarking at Waterloo one morning when he’s met by the police, who question him about a missing male friend and fellow commuter, the younger Kit Roper. It’s just after Christmas, and Jamie was the last person to see Kit on the riverboat home after work the night before Christmas Eve.

Jamie denies any knowledge of what has happened to Kit. Through a series of time cuts, Candlish gradually reveals the chain of events with several other twists/reveals that keep the reader on their toes. Candlish admits this was a challenge at times when she was writing the novel. “THE OTHER PASSENGER involves multiple deceptions, and keeping everyone’s stories straight was like wrangling an octopus. I kept having this horrible cold feeling that I’d let go of a leg.” No spoilers, of course, but rest assured her wrangling was successful and there is a particularly pleasing final punch. 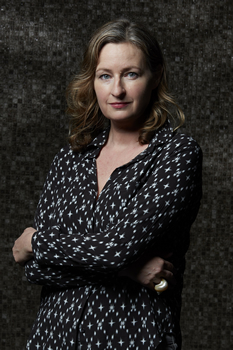 As well as the dark intricacies of the plot, Candlish’s depiction of commuting on the iconic Thames is fascinating. The research wasn’t a hard task for her. “I did Jamie’s and Kit’s journey several times for research, though it was a pleasure as well. I love the Thames, and it features often in my books.”

The Thames has its darker side too. Many people lose their lives in it: a dead body is washed ashore at least once a week, usually as a result of suicide, but foul play can also be involved. And then there are the major tragedies, in which multiple people have lost their lives. The pleasure steamer the Princess Alice sank on 3 September 1878, killing around 650 ordinary Londoners returning home from a day trip to the seaside. It seems extraordinary that such a major loss of life is hardly remembered.

A more recent tragedy was the Marchioness disaster. In 1989, the Marchioness pleasure boat, packed with more than 130 young partygoers, collided with the dredger Bowbelle and sank. Fifty-one people died. Candlish remembers it only too vividly and has the older Jamie recall it. But the younger Kit’s never heard of it when Jamie tells him of it. “Londoners my age know it as a household-name tragedy on a par with Lockerbie or Hillsborough,” she says. “I really wanted to include details, to pay proper tribute, but in the end a passing reference was all the scene could bear, which was a shame. I do think it helps with the authenticity, though, the fact that an author knows the background. The depths are there, even if you’re only showing the surface.”

Speaking of depths, Candlish has written in a number of genres, including comedy-drama and family drama. But she’s achieved her greatest success in the psychological thriller-suspense genre. She says her books had been getting gradually darker, but the real shift came with the 2019 release of Our House, her first book to have a crime at the center of the plot. She was actually on the verge of giving up when she had the idea for that book, in which an estranged husband sells the family home without the knowledge or consent of his wife. “I had become really disenchanted. My books weren’t reaching the audiences I wanted, partly because the publisher wasn’t spending money on the marketing. You can write War and Peace and still have a flop if the publisher doesn’t put muscle behind it.” 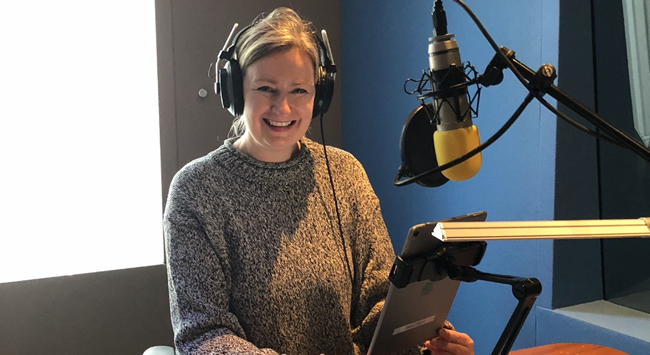 Candlish records an audiobook of her novella The Skylight for the literacy initiative Quick Reads, run by the Reading Agency in the UK.

But with Our House, “I knew the crime was original and would send a shiver down homeowners’ spines. I also had a cool idea for the structure, and since I had no publishing contract or editor, I was free to be as experimental as I liked. There was just me and my agent in the mix, and she was totally supportive. Great agents want you to write what gets you most excited. They know it will be your best work.”

For those who like happy endings, Our House was a huge hit with readers, was Crime & Thriller Book of the Year at the British Book Awards, and is about to be a major ITV series made by Red Planet Pictures.

Even better, Candlish’s move into thriller writing gives her enormous satisfaction. “I love writing bleak, dark characters who make mistakes so we don’t have to. They’re my alter egos, my monsters. There are challenges, though. This is an incredibly crowded market, with lots of brilliant writers, and it’s a strain to keep raising your game. Sometimes I long for a life of complacency!” 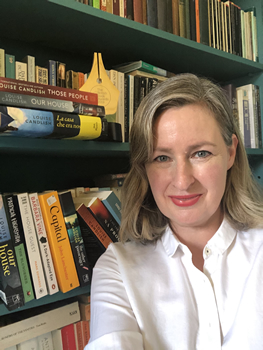 Candlish with her bookshelves, where her 2019 British Book Award for Crime & Thriller Book of the Year for Our House is visible

Yet raising her game is what Candlish does best. Her next book is called The Heights and is about a woman who reacts to a family tragedy in the most shocking way. “She’s basically hunting an enemy, and that enemy lives at the top of an apartment block called The Heights. Add to the mix the fact that she has a condition called high place phenomenon, and it’s a very tense situation.”

There’s not much research needed for this particular phenomenon, as Candlish admits. “I actually have this condition myself. When you are on a cliff or a ledge or a roof terrace or the top of a lighthouse (anywhere high and open, basically), you get the urge to jump. You’re not suicidal or depressed and you don’t ever jump, thank God, but it’s a frightening feeling, let me tell you!”