Some Lies Are Worth Telling 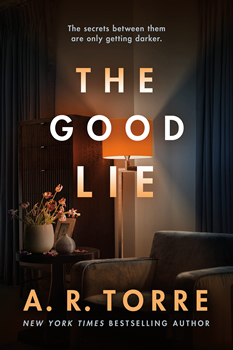 Is there ever a good lie?

A. R. Torre sets out to explore the question in her latest psychological suspense, THE GOOD LIE, which is available for preorder now and hits bookshelves on July 20 in print, virtual, and audio formats. About her new book, she says, “Ordinary people in ordinary lives can hide terrible secrets, and some lies are worth telling.”

Torre didn’t set out to become a writer. “I was a horribly grouchy reader,” she says. “One that always picked apart books and complained over their plots. My husband would continually roll his eyes and say the standard ‘If you think that you could do so much better…’”

As New York Times bestseller Alessandra Torre, she is known for her success as a romance author, but in recent years, psychological suspense has beckoned. “Writing romance requires that you adhere to a certain set of rules that you can only break at certain times. I can’t really kill off my heroine, or make her unlikeable, and a happy ending is almost a necessity. In psychological suspense, I can throw out the rulebook. My main character can be the villain, or die, or act in completely unpredictable ways. That freedom is liberating and exciting to my creativity.” 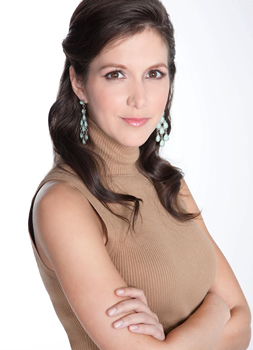 Thus THE GOOD LIE, her sixth in this genre, came to life. In it, Los Angeles psychiatrist Gwen Moore specializes in treating California’s most depraved predators and unlocking their motives. When she misses a call from one of her patients, and the patient and his wife later are found dead, she worries she might be at fault.

After their funeral, she meets a handsome widower, attorney Robert Kavin. Kavin agrees to represent Randall Thompson, who has been arrested for the grisly Bloody Heart murders of six teenagers. The infamous killer’s signature is a heart carved into the chest of each of his victims. Though one of the victims was Kavin’s own son, Kavin believes Thompson is innocent. He enlists Gwen to create a psychological profile of the real Bloody Heart killer. It will take all of Gwen’s expertise to uncover the terrible secrets leading to who committed these shocking crimes.

“I’ve always been fascinated by serial killers and loved stories of those who escape a killer and what they chose to say about their experience,” Torre says. “I had an image in mind for the main character, Gwen, and built this story around her. It was like assembling a puzzle of different ideas.”

For Torre, character always comes first. “Gwen and Robert were always clear in my mind. It was easy to capture their voices because I felt like I knew them…From the beginning, I knew who the villain would be, but figuring out how to unfold the plot came as I wrote. I’m not an outliner, so I’m used to figuring out things as I go.” 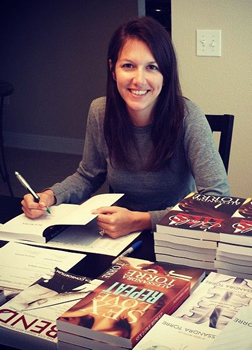 Torre signs books from home to ship out to readers.

One character that manages to escape the BH killer’s wrath is Scott Hardin, a young man from Beverly Hills. “I loved being in his world and had so much to play with in his character—his psyche, his experiences, what secrets he was keeping,” Torre says. “I always kind of sat up straighter in my seat when I got to his parts…I really loved writing his character because I had so many different places that I could take his story. My son was 17 at the time that I wrote Scott, so I leaned heavily on my son and his friends for inspiration and background.”

The hardest part? “Writing the Randall Thompson scenes. I struggled with his character and what to share versus hide in his scenes.”

The puzzle is part of the fun for Torre. “I’m always focused on when and how I should share specific details with readers. Deciding which scenes to include and from which point of view is always a fun game, but one you have to be careful with. There’s a fine line that I need to toe between giving the reader enough information without spoiling things for them.”

After she had the characters and plot in place, she fleshed out the legal and psychological details with extensive research. “I layered in most of the psychology research in the fourth and fifth drafts—after I had the plot solidly in place, and fleshed out my knowledge through psychology articles, case studies, and existing profiles on famous killers.” 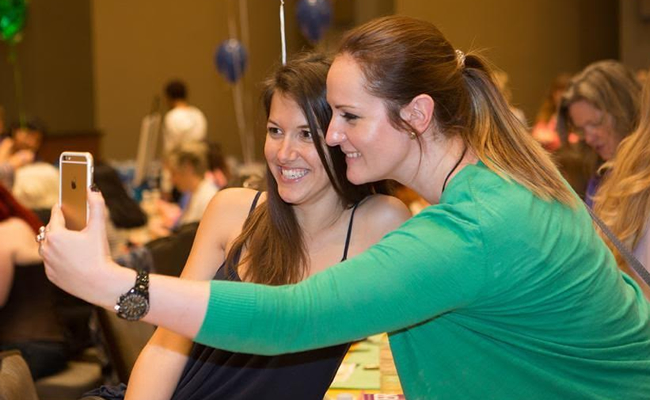 Torre poses with a reader at a signing in Dallas, Tex.

Therein lay a revelation. “One of the most surprising things about violently depraved individuals is how normal they can appear, even to their spouses and children. Many who do horrific things also show compassion and kindness and love in other areas of their life.”

She says the story stayed close to her original intention, but she is a ruthless editor. “At least 15 to 20 percent of my first drafts get thrown out as I trim the fat and delete unnecessary scenes. That helps the pacing, and switching between interior and exterior stories keeps my mind from getting bored.”

One subplot she killed was a romantic relationship for Gwen and Robert, because she didn’t feel it would sustain the suspense. “Circumstances in the plot/book made that unrealistic, especially given the short timeframe.” 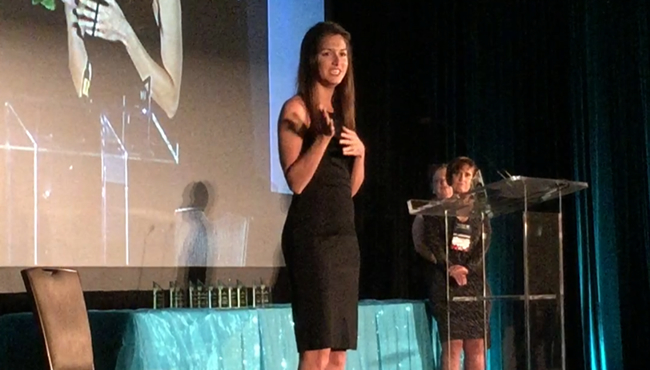 Torre accepts the Suspense of the Year award for her 2014 thriller The Girl in 6E at the RT Book Awards.

Torre says she is a self-taught writer. “I figured out things as I went (not a path I would suggest)—but my writing inspirations were Gillian Flynn, John Grisham, and Lisa Gardner. And Stephen King’s book On Writing was the best inspiration and help out of every craft book I read.”

Her writing process is disciplined. “When I’m in writing mode, I write six days a week, from 10 pm to 3 am. I’m a pantser, though I normally have a very rough bullet-point outline to keep me aware of where I’m going with the story. It takes me five to six weeks to complete the first draft, and then another two months to edit/rewrite. I used to write four books a year when I was writing full-time. Now I run a tech company, teach online courses, and host an annual authors conference (Inkers Con), so I’m down to two books a year.” 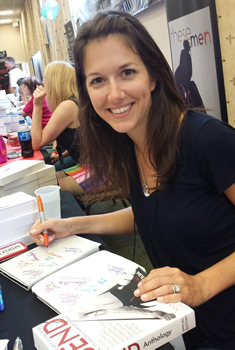 Torre signs books at the BookBash Conference in Orlando, Fla.

With a schedule like that, time management might be a challenge. “I’m juggling too many balls at the moment, and that makes creative development hard. The more divided your time and energy, the harder it is to find success. I need to learn to say ‘no’ more but am having too much fun with everything.”

Torre’s next novel is in the planning stage. “It’s also psychological suspense, though it isn’t in the same world as THE GOOD LIE. And while we don’t have a movie deal in the works yet—I would love to see THE GOOD LIE come to life on the big screen. It would make a fantastic movie!”