Winning the Battle Within 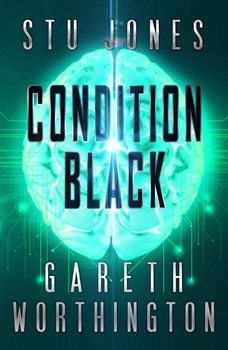 They say the greatest battles are within. CONDITION BLACK goes to great lengths to prove this with the novel’s two main characters.

Evan Weyland is a brilliant research scientist who happens to be on the autism spectrum. Now that his wife’s life is on the line, the decision to apply his research to save her comes with great consequences. Meanwhile, Billy Vick works with the Criminal Investigation Command, and his investigation into an unethical military project pits him against Evan. It’s  a game of chess-like deception and intrigue, with time running out. Ultimately, both men must come to terms with the magnitude of what’s at stake—and what each is willing to sacrifice to win.

Co-author Gareth Worthington defines CONDITION BLACK as “a high-octane thriller tackling large themes such as the horror of genocide and making medical advances without knowing the consequences, all told through the lenses of two men, one dealing with PTSD, the other living on the autism spectrum.”

Worthington’s co-author, Stu Jones, says the writing duo love tackling social themes in their work, and that they find real fun in packaging them in slick, page-turner novels with great characters. “That’s our bread and butter,” Jones says. 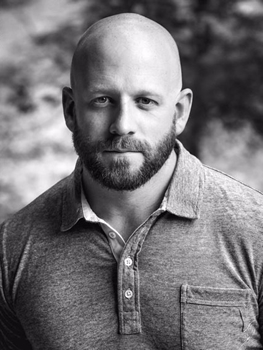 CONDITION BLACK is technically a standalone novel. However, readers of the pair’s previous books will have fun finding some Easter eggs.

As usually happens with novels, the initial idea far differs from the finished product. The term “Condition Black” refers to a state the human body falls into when a person is ambushed by catastrophic, life-threatening stress. They’re unprepared for it. In the case of the novel, the condition fits with the story in more ways than one.

“It started as something much more cliché, a scientist shrinking himself, Fantastic Voyage/Ant Man style, and going inside his wife to try to cure her of a fatal illness,” Jones says. “Only elements of this initial idea remained by the time we were done with CONDITION BLACK, but it definitely set us on the right track.”

The pandemic began right in the middle of the writing process and had its effect on the near-future medical thriller—a terrible global disease is more relevant than what was in the book. 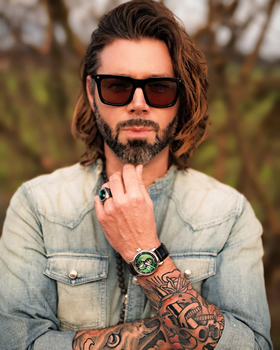 “Evan is based on my son, Nikolaj, who is on the autism spectrum,” Worthington says. “I really wanted to write a character where autism was just part of who they are, and not a story about autism. Does that make sense? I’ve never been diagnosed with autism myself, but my connection with my son is immense, and I know what he wants and how he feels about things—I can follow his logic path when no one else can. For me, the traits I wanted to showcase were his social awkwardness and what it must be like to live that way, but also his fierce loyalty to anyone he loves. My son is incredibly loving and protective of his family. To the exclusion of all else. It is the sweetest thing.”

As for Billy Vick: “He’s the very best of us,” Jones says. “He’s an American patriot scarred by multiple tours of combat. Those sort of scars never leave a person, and in writing Billy, I wanted to convey the quiet struggle that many of our service men and women returning from war face. The realities of PTSD. It’s sad, and overcoming those demons is a battle that is hard to win—if it’s ever won at all. Billy loves his country. He loves his friends and his family. He’s willing to give his life for these things. One of the things I love the most about this character is that he’s not Jack Reacher. He’s a proud American trying to hold to his duty and to an unwavering sense of justice, but he’s not a super soldier or a killing machine. In fact, every death on his conscience is another scar he’ll have to carry. He’s a warrior, and he’ll fight if he has to, but that’s never what he wants.” 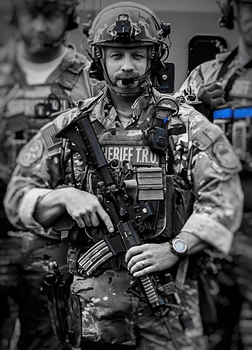 Jones dons combat gear for his day job as a police officer and SWAT sniper.

This novel pits the two characters against each other despite their conditions—autism and PTSD—and, in a way, they’re both essentially good guys.

“That is exactly what we wanted to do,” Worthington says. “Too often there is a bad guy and a good guy, but in the end, good and bad are perspectives. One person’s hero is another’s villain. I love the idea that you don’t see the world as it is, but how you are. Billy and Evan having strong neurological situations driving their actions, amps up the story ten-fold.”

At the beginning, the authors feared that readers would fall into camps like #teamcap or #teamironman, like fans did in the Marvel Studios film Captain America: Civil War.

“What I think ended up happening,” Jones says, “is that the reader ends up caring about each character and wants them both to succeed. This only serves to up the stakes and make the reader’s anxiety over the outcome that much more powerful when they clash.”

CONDITION BLACK is a near-future thriller, and the writing of such a scenario can lead to interesting trails while following the research. It even has a sci-fi twist that feels realistic enough. 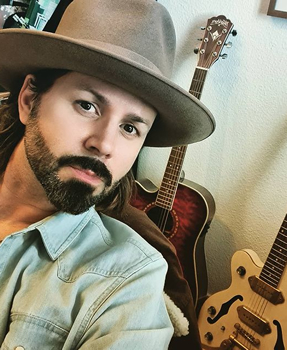 Worthington loves to play guitar, though he’s selective about when he plays; his son is on the autism spectrum, and music can sometimes be overstimulating for him.

“Without giving it away,” Worthington says, “it’s within the realms of possibility. Let’s just say I keep reading articles about quantum entanglement and nanotechnology that might just mean it’s a reality one day.”

“We guessed at where technology might reasonably be in another 20 to 30 years and applied it appropriately throughout the story,” Jones says. “As far as military tactics and procedures, I had to study up on Napoleon’s concept of Defeat in Detail to write several sections, and my own tactical experience served me well in the action segments. As for the touching on ASD [Autism Spectrum Disorder] and PTSD, Gareth and I both have intimate experience with each. I also took it a step further and interviewed a friend who was an Army Ranger on his experience in the 2003 invasion of Iraq. It greatly helped to form the foundations of Captain Billy Vick.”

Both authors have projects of their own, but admit this partnership elevates their work to new levels.

“When you work with another author, you have to respect their passion and instinct and sometimes go with that above your own,” Jones says. “It requires an enormous amount of trust, and in the beginning that part was hard for us. We made each other do everything in tracked changes so we could monitor exactly what was being altered and protest if we didn’t like it. That does nothing but slow down and create division. Now what we do is divide up characters. Gareth will tackle one and I’ll tackle another. After we’ve written our sections, we’ll trade documents and add our touches to the other writer’s section. But in the end, it’s their character, and we have to trust that they know best. After years of doing this and trusting the process, we rarely use tracked changes anymore.”

The co-authors are donating 20 percent of the net profits from CONDITION BLACK to 4ASDkids, an autism charity in Australia.