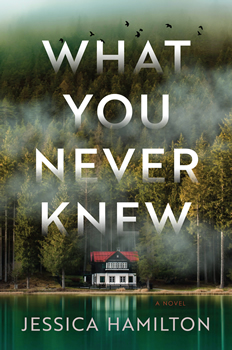 If you liked The Lovely Bones, you’re sure to enjoy Jessica Hamilton’s debut novel, WHAT YOU NEVER KNEW.

Told in alternating points of view, the story centers on the Bennett family’s 100-year-old cottage amid the forest on Avril Island, offshore in beautiful Lake Champlain. June Bennett, her sister May, and mother April spent every summer there, with weekend visits by their father Simon, until the summer June was 12, when something terrible happened.

Now 40, June thought the island had been sold decades earlier, but after May’s untimely death, she learns that the island was never sold, and now it belongs to her.

June will have to travel to the island and occupy the abandoned cottage in order to find out what really happened so long ago. What she doesn’t know is her dead sister May is with her there, in spirit, with her own story to tell.

Hamilton reveals that her family had a summer cottage when she was a little girl. “I spent every summer there with my grandmother and family. What made it so compelling was the feeling as soon as you walked through the front door—the sense of escape and refuge,” she says. “It was where family came together and important memories were made, free from the day-to-day burdens of normal at-home living. Cottage living involves being outside most of the time, relaxing, having fun, and is where being lazy is actually encouraged.” 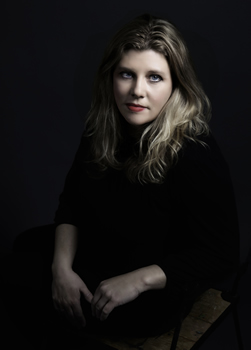 Her family’s cottage wasn’t on an island, Hamilton says, “but the details of the building are the same, along with the feeling and description of how [the characters] spent their days. I went to a sailing club growing up, where I met my husband, went cliff jumping, spent days on the dock with my sister, and explored the forest around us. June’s love of the place is exactly how I felt about my cottage.”

Writing the book was therapeutic, Hamilton says. Her characters are “a mash-up of people I’ve known and experiences I’ve had with some entirely new bits thrown in.”

Her favorite character in this story is the long-deceased mother, April. “For April’s character I used the glamor and beauty of my maternal grandmother as inspiration,” she says. “I also took some of the relationship struggles I’ve had with my own mother and magnified them to create the dysfunction that April creates with her own daughters. I had empathy for her because I do believe that people’s childhoods can cause them to develop survival strategies that damage themselves and others throughout their lives.”

Her relationship with her older sister inspired the close relationship of May and June. “Although the characters are very different from me and my sister, the dynamic is similar,” Hamilton says. “I’ve always leaned on my sister for support, and I know she felt a maternal responsibility for me even from a young age.” 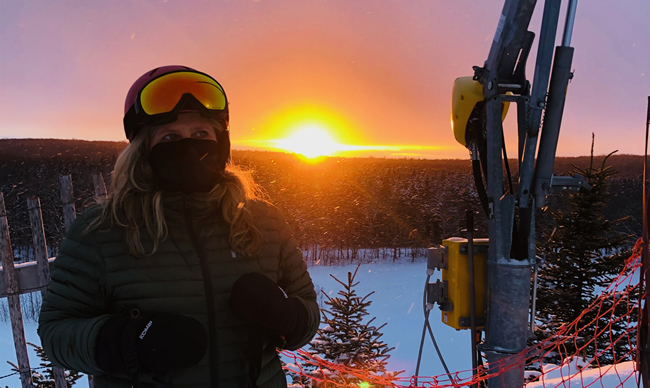 Hamilton prepares for some sunset skiing at a hill twenty minutes from her home.

Alternating points of view between May and June created suspense and heightened the drama. “I needed both of their points of view, but I also needed May to die,” she says, noting that May was conceived as a ghost narrator from the beginning. “I liked the challenge of writing a deceased character, and incorporating spirit elements into the story fascinated me.”

During her stay on Avril Island, June reconnects with Ezra, the son of the former caretaker. “Her relationship with Ezra is one of those rare ones in which you feel like you can totally be yourself and are fully understood by the other person,” Hamilton says. “A relationship that in the movies would be able to overcome all obstacles so that the people end up together, but I wanted to show how life and other people get in the way of good things.”

We won’t tell you how that ends. 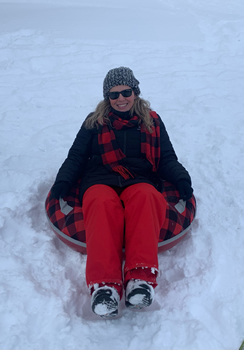 Hamilton says she’s been writing since she was nine. “My sister would write a title at the top of a page for me, and I’d create the short story for it,” she says. “I’ve been writing ever since and have always wanted to have a career as a writer.”

In her 20s, she traveled the world. “I spent six years after university living and working abroad,” she says. “I taught ESL in Australia, Taiwan, Japan, and the Czech Republic. Backpacked through India for several months and did a trek in the Himalayas in Nepal. I experienced an earthquake in Taiwan and had to live in a park in a tent for 10 days because we couldn’t go back into our apartment building. Then I backpacked through Southeast Asia, where I experienced a small plane crash in Vietnam due to major flooding. Shortly afterward, I finally decided to go back home to Canada and settle down.”

She found her agent, Carolyn Forde, mentioned on the acknowledgment page of a book in the same genre as hers. “I liked what that author said about her, so I did some research, and as soon as my manuscript was ready, I sent it right to her,” she says. “She got back to me within 24 hours asking for the whole manuscript, took only a day to read it, and then wanted to sign me. I was thrilled.” 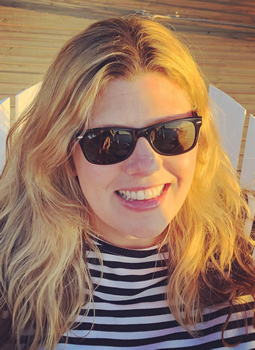 Hamilton enjoys a sunset on the dock at the family cottage.

Looking ahead, Hamilton is revising a previously unpublished manuscript and is writing “another novel in which a medium with a very haunted past—pun intended—is the protagonist. It has lots of family drama and secrets just like WHAT YOU NEVER KNEW does, but in a totally different vein.”