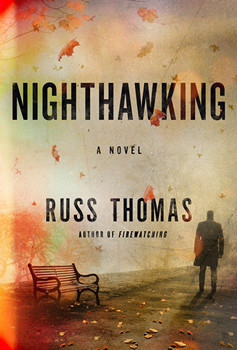 At once an homage to the classic genre and a timely twist on it, Russ Thomas’s Firewatching introduced an oft-lacking diversity to the genre with its protagonists—Detective Sergeant Tyler, a gay man, and Detective Constable Rabbani, a Muslim woman—and engaged with contemporary conversations about the challenges and rewards of diversification, as well what happens when outward inclusion masks ingrained resentments.

Now Thomas makes his much-anticipated follow up with NIGHTHAWKING, an electrifying second entry featuring the same indelible characters, fresh writing, and the hard-core thrills that readers have come to expect. In this incendiary installment, a nighthawker’s accidental discovery of a body of a foreign student pulls DS Tyler deep into the world of antiquities as he investigates a serpentine mystery of dangerous secrets, precious finds, and illegal dealings.

Thomas grew up in the 80’s reading anything he could get his hands on, writing stories, watching television, and playing videogames: in short, anything that avoided the Great Outdoors. After a few “proper” jobs, he discovered the joys of bookselling, where he could talk to people about books all day. Now a full-time writer, he also teaches creative writing classes and mentors new authors.

The Big Thrill  had a chance to talk with Thomas and ask him a few questions about his career, and his latest novel.

Did any particular event influence you in writing the novel?

No particular event, no. I first came across the term “Nighthawking” years ago when reading an article somewhere, and the concept just stuck with me as unusual and interesting. Who were these people who went around under cover of darkness digging up ancient treasure? It seemed both exciting and a little odd. Then when I needed an idea for a new book I started doing some research into various Nighthawking offenses. It’s a more common crime than you might think. There are about 20,000 metal detectorists in the UK and the majority are law-abiding citizens who rarely find anything more exciting than an old button from a 17th-century jacket. But there’s always the chance they’ll stumble across something big, and then what?

I like to explore what motivates people to make the choices they do. What does it take to turn an otherwise law-abiding citizen into a thief or a killer? Why do people self-destruct and choose to do things not necessarily in their own best interest? My hope is that, whether you like my characters or not, you’ll understand them. If we understand each other a bit better, maybe we can all be a bit nicer to each other.

Was there anything new you discovered or surprised you as you wrote NIGHTHAWKING?

There’s a scene set in a Zoological museum that is tucked away in Sheffield University. It’s a tiny place, not much more than a room, but is packed full of animals from all around the world. On the same day, I was lucky enough to be given a tour of the Controlled Environment Centre that also appears in the book. It really is the most incredible feat of human engineering and the home of some of the most cutting edge research into food sustainability. And it all goes on underneath a car park that I’ve walked across hundreds of times, none the wiser.

Our old friend COVID-19 has put a dampener on the celebrations so no big tour this time, unfortunately. The UK release has been put back until April when we hope the shops will be open again. But I am going to be doing a few online events.

When you’re not writing what are you doing (hobbies, family, etc)?

This probably sounds a bit dull, but if I’m not writing you’ll probably find me —crime fiction, of course, but all kinds of other things as well.  I’m a Marvel comics fan and have more than 2,000 comic books. If I’m not reading, I’m binge-watching a box set (currently working my way through “The Crown”—yes, I know I’m late to that party!).  I also have a PlayStation that keeps me out of too much mischief. I’m looking forward to the day I can start mixing with real people again though. Top of the list will be a pint down at The Red Deer with my mates.

Russ Thomas grew up in the 80s reading anything he could get his hands on, writing stories, watching television, and playing videogames: in short, anything that avoided the Great Outdoors. After a few ‘proper’ jobs, he discovered the joys of bookselling, where he could talk to people about books all day. Now a full-time writer, he also teaches creative writing classes and mentors new authors.