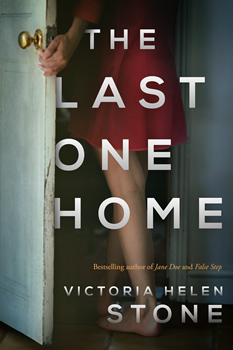 In THE LAST ONE HOME, the latest title by Jane Doe author Victoria Helen Stone, nobody can be trusted. Least of all your family.

Lies and the choosing of whose truth to believe has driven a wedge between mother and daughter Lauren and Donna Abrams, Stone’s steely protagonists. It’s through their voices that we alternately hear of how Lauren came to want nothing to do with Donna, whose spurious testimony sent Lauren’s father to prison for murder years ago.

Yet the father-daughter bond, repaired after his exoneration, still can’t be accepted by Donna. She knows her estranged daughter has made a terrible mistake by returning to his family’s estate. These doubts too begin to play on Lauren’s mind as she settles into the ranch and realizes her mother’s past might be catching up with her—and it’s not as untrue as she first believed.

The novel is psychologically complex due to these two competing voices, which Stone attributes to wanting to convey the real-life complexity of secrets and truth. “I really wanted to examine the truth as a three-dimensional object that can’t be entirely seen by one set of eyes,” she says. “Lauren views her mother through the lens of the difficult and twisted life they lived together. That’s all she can see. But Donna’s narrative offers an utterly different story from an utterly different woman than ‘Lauren’s mom.’”

This desire to combine limited personal perspectives, Stone says, came from a personal place. “Donna came to me first because I’ve been pondering that all-encompassing identity of being a parent. I’ve only known my mom as a mother. I’ve only seen her life when I’m near it. Likewise, my children only know me as their parent, not as the person I was with a whole life in the big city before they were in the world. Writing Donna was a fun exploration of that primal cry of ‘I swear I used to be cool!’” she says.

“Writing in alternating points of view and points of time actually made the work quicker. It was a nice palate cleanser starting each episode of writing with a new voice.”

As the novel continues and the stakes rise, the polar-opposite voices begin to coalesce and complement one another in unexpected moments. Psychological research Stone consulted gave a realistic yet tragic grounding for this.

“I’d been doing some reading on the different ways people learn to love when they grow up in dysfunctional homes,” she says. “Donna learned avoidance. She’s a fighter who falls for unavailable people because she’s uncomfortable with closeness.

“Lauren, on the other hand, loves anxiously. She’s a peacemaker who appeases people in her life and gets clingy. They’re complete opposites, yet they’re both starting from a strong fear of being hurt, and they’re both dealing with the same narcissistic man at the center of the story in THE LAST ONE HOME.”

Love, and moreover its complications, is a subject that Stone does not shy away from. Prior to entering the world of dark fiction, she was a prolific writer of contemporary and historical romance under the name Victoria Dahl. Thriller and romance are not worlds that Stone is keen to keep entirely separate, however. As she puts it, “I love combining the stress of danger with the tension of attraction and heartbreak.

“Let’s be honest, people add a lot of risk, intrigue, and crime to their lives for the sake of love and sex! So for me the stories aren’t separate at all. Humans are extremely motivated by lust. The biggest difference is that my suspense novels rarely end with a successful romance. Don’t trust anyone.”

THE LAST ONE HOME makes this mistrustful mantra easy to believe, especially in moments caught in the isolation of rural Sacramento, where much of the novel is set. Although similarly isolated, Stone’s office high in the Wasatch Mountains of Utah, where she usually writes her novels, is quite a distance from the heat of the California dust.

Stone needed to solve the problem of space practically. “I took an actual research trip to Sacramento, and I loved it! I stayed at a beautiful B&B in the hills near Placerville. I already had a picture in my mind of what the ‘home’ of THE LAST ONE HOME looked like, and when I spotted the Eden Vale Inn online, it was absolute perfection. Quiet golden hills and winding roads that turn into dark isolation at night,” she says.

“I spent a few days (and nights) writing longhand there, and then I stayed near the river in downtown Sacramento before returning home to work in the cold mountains.”

It is in these cold mountains that Stone is plotting her next endeavor. “I’m hard at work on a 2022 suspense featuring a mother and her young son, the fugitive ex who ruined their lives, a serial killer mystery, and a suspiciously cute new love interest who may or may not be there to help.