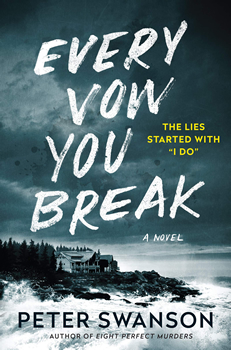 Abigail Baskin has always dreamed of her fairytale wedding—but she didn’t think she’d fall in love with a millionaire. Bruce Lamb is a nice guy. Level-headed. Stable. A man who wants to take care of her for the rest of her life and has the financial means to do it.

Abigail wants that too. At least, she’s pretty sure she does. But at her bachelorette party, she makes a drunken mistake by sleeping with a sexy stranger who won’t reveal his name. Telling Bruce about the indiscretion would crush him, and it’s too late to cancel the wedding anyway, so Abigail decides to put the incident in the past.

Too bad the guy she had sex with won’t let her. “Scottie” seems to be everywhere—including on the highly secluded island her husband booked for their honeymoon.

In Peter Swanson’s gripping new thriller, EVERY VOW YOU BREAK, Abigail takes matters into her own hands to not only fight for her marriage, but also to find answers about a number of things that are strangely amiss—like her husband.

In this The Big Thrill interview, Swanson shares insight into what inspired this pulse-pounding not-so-happily-ever-after thriller.

First off, it’s been a tough year and few months—how are you and your family doing?

I feel fortunate that both my wife and I have weathered this storm pretty well—we’ve stayed healthy and employed. And I can attest that for writers, nothing much changes in your life during lockdown. You’re still at home every day, all day, either writing or feeling bad that you are not getting any writing done. 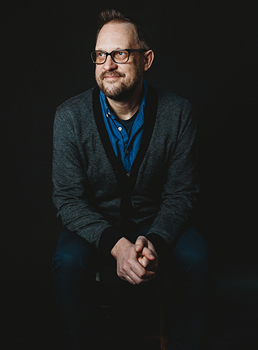 Congrats on your upcoming release. In EVERY VOW YOU BREAK, Abigail is wracked with guilt over sleeping with someone at her bachelorette party. Infidelity is a common theme in thrillers, but of course in this book, the incident is the catalyst for a much more terrifying sequence of events. What was the inspiration for this novel?

I’ve always been drawn to thrillers in which a single mistake, one wrong step, leads to horrifying consequences. The movie Fatal Attraction is an example of this, so I was initially interested in doing a sort of gender-reversed Fatal Attraction. That led me down a rabbit-hole of possibilities, and I think I ended up writing a book that is very, very different from a typical infidelity thriller.

Some might argue that if Abigail was having second thoughts before tying the knot, she shouldn’t have gone through with the wedding. What considerations did you give to how this would play with readers? 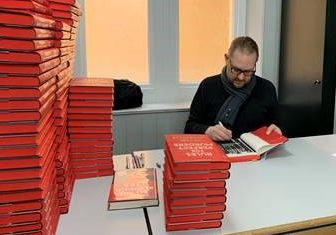 It’s very hard to cancel a wedding, and I suspect that far more people in real life go through with ill-advised weddings simply because the logistics of canceling them are such a nightmare. (Have you ever tried to get a refund on a tent rental?) So, yes, Abigail clearly makes a mistake, but I think it’s a common one, and not only that, but she comes up with all sorts of rationalizations for steaming ahead. I wanted Abigail to be flawed but recognizably human.

It’s difficult to share too much about the book without giving away spoilers, but setting plays an important role in the novel. What can you share about how you came up with the island camp?

I’ve always wanted to set a thriller on an island. There are obvious reasons—the seclusion, the atmosphere—but most of all, the idea that you are cut off from the rest of humanity. And I’ve always been interested in abandoned places, buildings that have been repurposed. All of this led to my imaginary island. 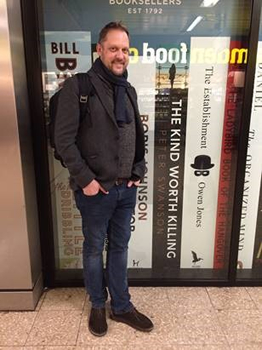 Swanson in front of a bookstore display in London.

Obviously the famous lyrics of a Police song played out as soon as I read the title of this book—and sometimes throughout. Do you write to music? Was this song on your playlist?

I absolutely write to music, but never to music with lyrics, so I wasn’t listening to this particular song while I was writing. I am a huge fan of film scores, and I’d say the albums on heaviest rotations as I wrote this particular book were John Barry’s score from Body Heat and the score from Notes on a Scandal by Philip Glass.

“Scottie” was the perfect creep. Have you ever come across anyone in your real life that has given you those “heebie jeebies”? What can you share about the inspiration for his character?

Yes, back in the olden days of going to bars and meeting strangers I’d come across characters who would give me pause. But the truth is that being a creep is a pretty gendered thing. There are obvious outliers, but I will say that most of what I know about creepy guys comes from stories I’ve heard from female friends. Sad but true.

It’s a tough time for book promotion and marketing right now. How are you navigating these obstacles with EVERY VOW YOU BREAK? Do you have any upcoming virtual events you’d like to promote?

In some ways, the navigation is the easy part. To get to a reading these days means all I have to do is walk from one room to another. Obviously, I do miss seeing people in real life, but until then, we have Zoom, and you can hear me talk about my new book at two upcoming events: 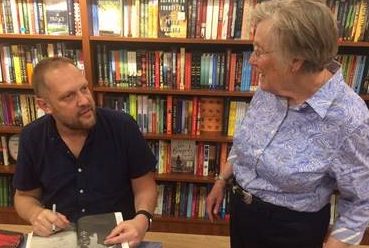 The Big Thrill is as much for writers as it is for readers. As the bestselling author of seven novels, what is the single most important thing you’ve learned as a writer that you would pass on to aspiring scribes?

Get to the end. That’s a bit of a cliché, but it bears repeating. Every time I start a book, I need to remind myself that a perfect opening paragraph, or a brilliant characterization or set piece, means absolutely nothing if you don’t eventually put down that final sentence. The whole story needs to be told, and then it’s time to fine-tune.

You’re also a successful poet and short story writer. What is your favorite medium to write in, and how do they complement each other?

As I’ve gotten older my writing mediums have gotten longer. I started writing lots of poetry, then stories, then novels, and without a doubt, novels are now my preferred genre. This might have something to do [with the fact] that I’ve had the most success as a writer of book-length fiction, but it’s also that I love to spend a long time in one particular story.

A novel that is a modern update on Agatha Christie’s And Then There Were None.