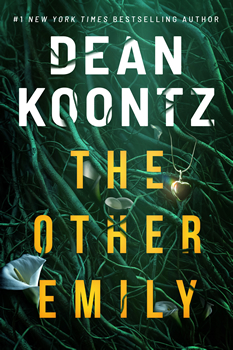 For a long time, that was a liability, especially as Koontz was trying to find his footing in the New York publishing world. “I hate repeating myself,” he says. “Now, publishers love you to repeat yourself once it works. If I wrote a novel about a bricklayer, they’d want 20 novels about a bricklayer.”

His new novel, THE OTHER EMILY, is both very much identifiably Koontz and yet in many ways unlike anything he’s done before. It’s his third novel with the Amazon imprint Thomas and Mercer, a relationship that has proved to be one of the most fruitful Koontz has had in a career spanning more than 50 years.

“It used to be, my publishers got the cold sweats, and there were times when I would deliver a book that we would have arguments about,” Koontz says. With every novel, he tries to challenge himself, and as he freely admits, he’s challenged his publishers too.

Starting with Strangers, he decided that he was going to stop turning in outlines and just write the novel he wanted to write, following his muse wherever it led him. As he told his publishers, “I’m not going to explain what I’m writing. You’ll just get a book. And you’ll like it or you won’t, and if you don’t, I’ll pay you back.”

Needless to say, his publishers didn’t ask for their money back. But Koontz has certainly run into many roadblocks over the years. “When I delivered Lightning, my publisher, oh, hated the book,” he says, with more than a hint of amusement. “She told me, you’re having an escalating career, you’re on the hardcover bestseller list now, and paperback, and you can’t publish this book because it’ll destroy your career.”

Of course, Koontz’s career has flourished since then, and that in part has given him the confidence to follow his instincts wherever they may lead. “You say, okay, I will listen to that kind of negativism and I will take it seriously,” he says. “But if I believe in my heart that this is a story that works, I’m going to just have to say, thank you, but no thank you.”

Luckily, Koontz has had a receptive audience at Thomas and Mercer. “They’re very enthusiastic about everything,” he says. “And that’s sort of been a first for me. So I’m very grateful for it. Who knows? At some point, they may say, what were you thinking? And then I’ll have to explain myself.”

The appeal of Koontz’s latest novel, THE OTHER EMILY, needs no explanation: it’s a love story wrapped inside a thriller, with elements of cutting-edge science fiction and enough suspense to keep readers turning the pages well into the night. As the story opens, a woman named Emily Carlino has vanished on a desolate road and is presumed to be dead at the hands of a notorious serial killer. “It’s been 10 years, and her body has never been found,” he says.

Her boyfriend, novelist David Thorne, is devastated. Even after a decade of mourning, he still hasn’t gotten over what happened. “Then one night he goes into a restaurant and there she is at the bar and she hasn’t aged,” Koontz says. “And that was the little thing that began it.”

Since he works without an outline, Koontz had some big mysteries to resolve about Emily: “What happened to her in those 10 years? And why she doesn’t seem to have aged became the thing that I sweated with for a while.”

Working his way forward page by page, revising as he goes, usually gives him time to resolve whatever issues lie ahead in his work-in-progress. “If it’s taking you weeks to get there instead of a week or two, it’s taking you a month, you’ve had a lot more time to think about it,” he says. “And usually when I get there, there’s two or three ways to go. I can choose the one that seems the most believable.”

As Koontz was trying to figure out what had happened to Emily, so too was his main character. David is a successful writer haunted by mistakes he’s made and by the mystery surrounding Emily’s disappearance.  Desperate for answers, David pays regular visits to Ronny Lee Jessup, the serial killer who is presumed to have killed her.

Jessup is described in the novel as “a big but gentle-looking man” with “honey-brown eyes like those that might be sewn to the plush-cloth face of a stuffed-toy bear.” Despite his appearance, Jessup is a cold-blooded killer, a man who’s murdered women and brought them to an underground lair where he believed he could someday reanimate them. “A friend of mine said that is the creepiest character you’ve ever done,” Koontz says with a hint of pride. “And I said, well, that’s saying something, ’cause I’ve done a lot of creepy characters.”

While Emily wasn’t found among his victims, Jessup plays coy on whether she’s hidden away or not. David continues to try to solve the mystery of what Jessup knows and whether this new woman he’s just met is really Emily or someone else. Along the way, the novel also intertwines with the myth of Orpheus and Eurydice. Ultimately, David—like the character in the myth—must venture into a dark place, both mentally and emotionally, to try to recover both his long-lost love and his own sense of identity.

As his long career has demonstrated, Koontz’s imagination knows few boundaries. But there is one thing he admits he never could’ve dreamed of. Back in 1969, his wife, Gerda, vowed she would support him for five years while he tried to eke out a living as a full-time writer. “At that time, I said, if I could make $25,000 a year for the rest of my life, that would be fantastic,” he says.  When his career began to take off in such a big way, he says, “it was just astonishing.”

While Koontz may be amazed at his enormous success, he doesn’t take it for granted. “I always thought it was going to end and here I am at 75, busier than ever,” he says. “So it’s kind of weird to me, but I’m grateful every day for it.”