Writing A Standalone After A Decade 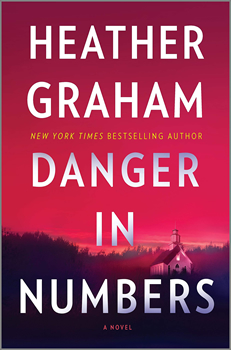 You’d be hard pressed not to have read a book by—or at least heard about—Heather Graham. The New York Times bestselling author has written a staggering 200 novels between her three pen names, carving out a place for herself as one of the most prolific and talented authors in the genre.

But her passion for the industry expands far beyond her work. Throughout her career, Graham has served various executive roles in both the International Thriller Writers (ITW) and Mystery Writers of America (MWA) organizations, and under the pen name Heather Graham Pozzessere, she founded the Florida chapter of the Romance Writers of America (RWA) organization. To say she’s immersed in this world would be a grave understatement.

The effort has more than paid off. In addition to hitting the bestseller charts, Graham’s work has been recognized by a fistful of awards and commendations—including a lifetime achievement award from the RWA—and she’s the proud recipient of ITW’s Silver Bullet, as well as being awarded the prestigious Thriller Master title in 2016.

One would forgive her for resting on her laurels—it’s the kind of career many writers only dream of—but it’s clear Graham is not only far from done telling stories, she’s not afraid to step outside her comfort zone.

While many of her books fit neatly into series compartments, Graham’s forthcoming release, DANGER IN NUMBERS, is her first standalone in more than a decade—sort of. The story—which kicks off in the Everglades at the scene of an eerie murder investigation—explores ritualistic killings in a small-town community, with devastating consequences.

But as Graham indicates in this exclusive interview with The Big Thrill, the characters’ stories don’t end after “the end” of DANGER IN NUMBERS.

DANGER IN NUMBERS is your first standalone thriller in 10 years—how did it feel to venture into new territory, with unfamiliar characters?

When I write any book, whether it is standalone or part of a series, I try to make sure that it’s . . . standalone! That’s always tricky, trying to give enough back information without giving too much. But DANGER IN NUMBERS is the first in a four-book series that I’m excited about—based on the Four Horsemen of the Apocalypse. Each book deals with an individual situation, but all four also connect at the end. I was able to head to a few places in the state that I love making sure I remembered my geography well, and I have friends with the Florida Department of Law Enforcement and took the opportunity to . . . drive them crazy.

Just a few weeks ago, I finished a re-watch of THE FOLLOWING, a TV show featuring Kevin Bacon and James Purefoy, so religious cults have been on my mind. But I’ve always been fascinated by cults, particularly those of a religious nature. What about cults drew you to this story?

I’m amazed by and horrified by cults. So many terrible things have happened to people in my lifetime because of them that I’ve always tried to figure out how people can be so manipulated, even into hurting their own children and spouses. With my lead character’s parent, realization came. But then the problem—how do you get out?

Was there anything that surprised you in your research for this novel?

I can’t say anything surprised me, but I had a wonderful time. I think that the Miccosukee and Seminole tribes of Florida have an incredible history—they never surrendered, and I always love heading out to the villages and reservations. The Everglades provided a haven for so many in a way, while still being an incredibly deadly place if you’re not careful. Also, sadly, through the years, our great “River of Grass” has been a place where criminals can hide a great many sins.

This book feels grittier than your previous work—a little more gruesome and raw. Was that conscious? How do you balance how much of that to put in a story, and what stays off the page?

I think it depends on the story. And, of course, I played off several real events [from the state’s history].

Setting plays an important role in this atmospheric thriller. How much about the Everglades is gleaned from personal experience, and how much research was required?

I do love the Everglades. There’s an area called Shark Valley where you can walk, hike, bike, climb an observation tower, and attend ranger talks. The birds are beautiful. The canals are filled with alligators, and you may have to walk around a deadly snake, but they haven’t had bad things happen there—because, I believe, most people come to appreciate nature, and not to pull the tails on our great predators. (Yes, people have thought this would be funny. Not a good idea.)

As you know, The Big Thrill is as much for aspiring writers as it is for readers. You’re a New York Times bestselling author, with more than 200 novels under your belt. 200 novels! That is such a staggering number. What advice would you give to writers who are struggling to finish that first book—and then how to keep going?

Most of us write because we were incredible readers from the get-go. No one writes a book in the exact same way as anyone else. But the key, I believe, is being dedicated to yourself. Some people may write every day while those with day jobs and young children might grow frustrated seeking time. The thing is that whatever time you allot yourself—even if it’s one day a week—be dedicated to your time. Also, we hear about editors and agents reading the first pages and deciding on a book early on. I’ve seen people become so obsessed with those first pages that they don’t get any further. I believe that you get it all down first, with all your passion for your project. Once you’ve put your excitement and heart into your work, you can go back and obsess. My other piece of advice is to listen to criticism and be smart, and follow your heart and your instincts. One person may love your character and not care for your plot. Another may love the plot and find your character unbelievable. Reading is subjective. Listen, be open to seeing if something is an obvious cliché, and then go with your own voice. Oh, hm. Listen well if it’s an editor wanting to buy your work and you love the editor and would love to work with them!

You’re known for writing some incredible romance within your suspense novels, and that continues with DANGER IN NUMBERS. How important is the balance of romance and suspense, and what are some of the tips you’d give in achieving that balance?

That balance may be different for different authors and readers. I believe relationships need to be character-driven and enhance the plot. I also believe they’re important; I know as a reader I fall in love with the characters who become three-dimensional to me, and that has to do with their actions and their relationships, romantic and other!

You’ve had such an incredible career, with many more books ahead. Is there a milestone you have yet to achieve that you would like to?

I worked in theater for years before writing and wrote a few plays—but I’ve never written a screenplay. I would love to learn the differences. (Much like playwriting, I’ve been told, lots of dialogue—and no, they don’t enter stage left!)

I have been happy during the past year to work on several short stories—thriller and horror—and I just wrapped one up. I do two series each year, this one now on the Four Horsemen of the Apocalypse, and the Krewe of Hunters. I’m on to revisions for this year’s Krewe of Hunters trio, the first being The Unforgiven and on shelves in May. It takes place in my home away from home, New Orleans! Next up, finishing the second Horseman novel.

Click here for an exclusive look at a chapter from DANGER IN NUMBERS.