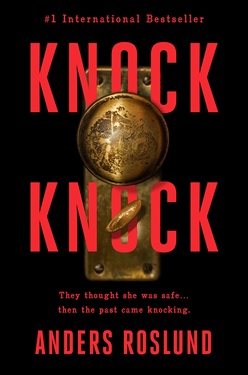 The cover of Anders Roslund’s latest release, KNOCK KNOCK, is dominated by the image of a handle on a locked door. It’s a door that hides the novel’s gut-wrenching opening scene: a tragedy in which a five-year-old-girl is the only survivor.

Ewert Grens, the iconic Criminal Inspector created by Roslund with late writing partner Börge Hellström, is the man called to investigate. Fifteen years later, he is called again when he learns someone has broken into the old crime scene. Grens immediately fears that someone is intent on silencing the only witness. Thus begins the exhilarating race against the clock, which embroils Grens, along with former police informant Piet Hoffmann and his family, in a complex web of deadly conspiracy.

The particular door Roslund wrote this electrifying Stockholm thriller behind was that of an isolated summer house on a small island on a Swedish lake. This, he says, was a help. “Deer and wild boar don’t know much about human struggle, and those days almost felt normal,” he says.

Yet the experience also worked against him. It was here that he learnt his son has been hospitalized for COVID-19. “In the big picture it struck me, just for a moment, how inconsequential a profession like writing books can feel in comparison—one of my two sons ended up in hospital fighting COVID-19, side by side with hard-working doctors and nurses, and there I sat making up stories,” he says. “Then I realized how [writers] are perhaps needed now more than yesterday as a reason to escape from this reality and provide time to think, reason, and be entertained. As in stories, we need balance when everything is falling.

“In that smaller picture, I discovered how during my 17 years as a full-time writer, I always considered myself as super-duper fantastic at self-discipline. But during the pandemic, I slowly realized how dependent I am on the outside world, stepping in and out of it as I like, when it suits me. Now, suddenly going to my favorite café (the same since 1992)—a cornerstone in meeting people, chatting for a while, making up for that lonely self-discipline and staying normal—wasn’t there. Again, we need that balance to stand up.”

In place of a normal life of cafés and the outside world, Roslund threw himself into the writing of KNOCK KNOCK. Though the breakneck pace and split decisions the characters make feel utterly spontaneous, he says plotting this thriller was a very different process.

“I spend a lot of time nailing down almost everything in the plot and pacing and then building and rebuilding,” he says. “That said, the story takes unplanned turns, changes, and surprises me. I tend not to believe any crime writer who says, ‘I just start writing, without even knowing who the murderer is.’ In order to hold your reader’s hand, at least one of you needs to know where you’re both heading.”

Where this novel is headed is into nail-biting ordeals with incredible emotional stakes. These emotions were hard for Roslund to keep on the page. “When writing with Hellström, our differences concerning this matter really showed,” he says. “The moment Börge left my writing studio, he dropped the story, tucked it away, and opened that box the next day coming back to the studio.  He was able to distance himself from the characters’ feelings, and that was his way of dealing with himself and life. I’m the opposite. I (unfortunately) can’t let anything go. I live my characters’ feelings and troubles, that’s how I’m built.”

Roslund may live his characters’ feelings and troubles, but KNOCK KNOCK’s portrait of Grens and Hoffmann shows that they in turn carry some of their writer’s emotions. Grens, the inspector The Wall Street Journal described as an “eccentric, alienated, socially inept hero” worthy of comparison to Wallander, is pained by confronting the ghosts of his past. After the terrible loss of criminal reform campaigner and Roslund’s writing partner Börge Hellström to cancer in 2017, returning to writing without his companion was a door the author too found difficult to open.

“I miss Börge every day,” he says. “He was not a colleague, not a friend—he was a family member.  No one has had so many breakfasts or lunches or late dinners in my home. When he died, I was not really there, I was cut off, numb. Now, almost four years later, I feel all that I was not capable of during dark days.”

Things changed for Roslund as a writer, but not as much as he expected. “Our process and agreement, which was no secret, for writing books would be to meet and talk about the story, then split up for a long time and I’d write it all into a novel, then we would meet again, reading and talking and arguing before I revised a second version.

“So being alone, I knew all about carrying a story. Of course in the first stages and in story planning I needed to change Roslund & Hellström into Roslund & Roslund, arguing with and convincing myself instead of Börge,” he says. “I also kept big parts of the universe we built, like Superintendent Grens and the infiltrator and former criminal Hoffmann. I have of course adjusted some of that which I fought for (now fighting myself), meaning Grens is somewhat less pissed off all the time, making a late but necessary inner journey hand in hand with solving crime.  Also, Hoffmann’s family now, his children and wife, are more included and are important characters in building plot.”

Roslund hopes this installment can allow us to go beyond our walls, at least within the realm of imagination. “During these strange and alone times without hugs, we all need to go away for a while, at least to a fictional world,” he says.

For this reader, at least, that door was definitely opened.