A Timely and Thought-Provoking Thriller 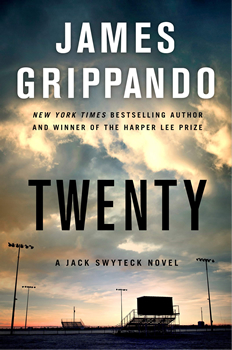 James Grippando has been at the top of the legal thriller tree for quite a while—but in his latest, TWENTY, he gives us what might be his most timely and thought-provoking story yet.

In it, attorney Jack Swyteck and his family become involved in a case after a deadly school shooting claims 20 casualties. It’s the fifth mass shooting in Florida in five years. Swyteck’s wife and daughter are at the school during the shooting and manage to survive. Later, a student confesses to the shooting, and Swyteck is asked to defend him.

If you read this series, you know that Grippando likes stories about ordinary people doing extraordinary things— Swyteck is certainly in that mold.

“Jack is not super-cool, super-rich, or super-successful,” Grippando says. “But he’s the kind of guy we all want as a friend—someone we care about enough to celebrate his good days and suffer through his bad ones as if they were our own. More than anything, Jack really does try to do the right thing. I’m not saying he’s Atticus Finch, but when I had the chance to speak with the judges who selected Gone Again as winner of the Harper Lee Prize, that quality in Jack was what seems to have resonated with them most.”

Still, Swyteck can think of a thousand reasons not to defend a high-school student accused of a mass shooting. The public wants a quick conviction, and the prosecutors believe they have an airtight case. Grippando says this was the most difficult hurdle he faced in writing TWENTY. He had to make it believable that Swyteck would put aside his reservations and take the case.

“The answer came to me in the form of a letter-to-the-editor written by a parent of one of the students who was killed in the Parkland shooting in south Florida in 2018,” Grippando says. “The defense lawyer in the Parkland shooting announced that his client would plead guilty if the prosecutor would drop the death penalty. The father of one of the victims urged the prosecutor to take the offer. It wasn’t about mercy or his views on capital punishment. That father simply didn’t want to relive the murder of his child over and over again as death penalty hearings and appeals went through the legal system for the next 10 years. He wanted his own sense of closure.”

A version of that father appears in TWENTY as Swyteck’s friend who urges Jack to take the case for the same reason. It is an understandable reaction, and it makes it easy to understand Swyteck’s decision.

Mass shootings are touchy, sensitive events. Grippando says he wanted to write about one because the Parkland shooting was particularly close to home for him. Coral Springs police responded to the shooting. His family moved to Coral Springs in 1977, and his mother still lives there—but that wasn’t all that drove him to write on this topic.

“During my research for The Big Lie, Swyteck novel No. 16, I uncovered the story of how Hialeah Junior High School almost became the site of Florida’s first mass school shooting back in the 1980s. A man named Carl Brown walked into a Hialeah gun shop, purchased two shotguns and a semiautomatic rifle, rode his bicycle six blocks to a welding shop that he claimed had overcharged him the day before, and shot and killed eight employees at close range, wounding three others,” Grippando says. “He climbed back on his bike and was pedaling to Hialeah Junior High School with the announced purpose of killing a lot of people when an employee of the welding shop caught up with him and gunned him down. It struck me that Florida’s first school shooting was averted only because that worker at the welding shop owned a gun and knew how to use it. Nothing in this world is black and white, and it’s always the gray areas in life and law that attract me as a writer of legal thrillers.”

Less obvious is the significance of the book’s title. Readers will actually go through a series of steps to get it.

“At first it appears to be the number of victims,” Grippando says. “Thirteen dead and seven wounded. Then as the possible Al-Qaeda connection to the shooting quickly emerges, ‘twenty’ seems to be about the twentieth anniversary of the terrorist attacks of September 11, 2001. Only at the end does the true significance of ‘twenty’ emerge, which I can’t share without spoiling the read.”

We’ve followed Swyteck through 17 previous cases—would he have handled this case differently at the start of his career? Grippando says that question goes to one of the most poignant scenes in the book.

“What keeps the Jack Swyteck series going after more than 25 years is how Jack continues to grow and evolve as a character. He started as a fiery young criminal defense lawyer fresh out of law school, almost naïve in the ways of love and lawyering,” he says. “Jack is now a successful attorney with his own firm, remarried to an FBI agent, and the father of a young daughter. Without spoiling the scene, there’s a moment when Jack realizes that he is no longer who he used to be.”

Grippando thinks a lot of readers will connect and relate.

But all of that said, ultimately Grippando’s books are thrillers, and he doesn’t see writing them as being all that different from writing any other kind of thriller.

“In any novel, a writer can throw in as many great twists and as much action as the mind can imagine,” he says. “But none of it resonates unless the reader cares about the characters you’ve created. After my first novel, The Pardon, sold, my editor sent me a 35 page letter describing the six essential elements of a thriller. I still use those guideposts, and I’ve even shared them with students in my class on law and literature. But there is no all-purpose answer to the question of how to put the thrills in a thriller. I think my very first agent, the late Artie Pine, had it right. ‘The key to any good thriller,’ he used to say, ‘is in the first 10 pages,’ with the test of a great 10 pages being simply this: Do you want to get to page 11?”

If you love a great thriller, you’ll definitely not be able to stop at page 10 of TWENTY. This story will pull you all the way through to the end.