On the Hunt for Missing Persons 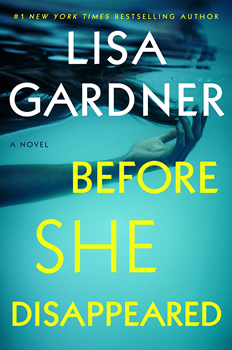 Frankie isn’t a police officer. She’s not a private investigator. She’s not out for money or fame. She just travels around the country looking for missing people.

That’s the fascinating premise of Lisa Gardner’s new thriller BEFORE SHE DISAPPEARED— a page-turner about the search for a missing teenage girl in Boston and the mysterious woman obsessed with finding her.

Gardner—the award-winning author of more than 20 bestselling novels—says she got the idea for this book after reading a BBC Online article one day about an everyday person who searches for missing people.

“From that news brief, I discovered an entire world of amateurs who seek to make a difference by working missing persons cold cases,” she says. “What I gleaned: especially in situations where technology has failed, the right person asking the right questions can make all the difference.”

Her protagonist in BEFORE SHE DISAPPEARED is Frankie Elkin, a middle-aged woman, nine years sober as an alcoholic, with no real home or family, who battles the demons from her own past by dedicating her life to finding people everyone else has forgotten.

“Frankie Elkin is your everyday average person,” Gardner says. “What takes her to this place where she sells all her worldly possessions and goes from town to town to get justice for the underrepresented? The line that sums Frankie up the best is: ‘She has more regrets than belongings.’

“She’s at that phase of her life where she knows what doesn’t work. She’s trying very hard to discover who is she and what can she do? She’s obsessive—a normal person would not do this. She has replaced one compulsion (alcohol) with another (solving missing person cold cases). But this compulsion is working for her. She’s living an anti-life—no mortgage, no picket fence, no suburban house—and in doing so, she’s found herself.”

The missing person she’s trying to find this time is a 15-year-old Haitian girl named Angelique (Angel) Badeau who lives in a crime-ridden Boston neighborhood and disappeared 11 months earlier after leaving school. Gardner says she set the story in a minority area because often those kinds of missing persons cases are the ones that get the least attention.

“We do not all get treated equally in life. And very sadly, we don’t get treated equally in death,” she says. “So with many of these missing persons there’s an assumption that the person ran away, killed themselves…they simply don’t get the resources that other missing person cases might. Ethnicity definitely plays a role. If your skin is a certain color, you’re much more likely to fall through the cracks.”

And even though Frankie has no special skills—she’s not a trained fighter or a computer whiz or anything else like that—she winds up having more success than the police in the investigation for the missing girl. Why? Well, according to Gardner, Frankie is “a good listener.” But also working in her favor is this:

“If you’re an everyday person investigating a cold case missing person, how do you do it? Well, not being not a cop can be a huge asset. There are communities like this one that often have an adversarial status with the police. The fact that Frankie is just a person plays to her strength.”

She says that none of these started out as series when she wrote the first books. “I didn’t realize we were going to keep going with the characters from there, but we did,” she says. “I joke that I’m a non-series series writer.”

One of the things she is famous for is the tremendous amount of research that goes into her books. Recently she wrote an essay for the New York Times about her visit to the Body Farm in Tennessee, a groundbreaking forensics facility that studies the decomposition of human remains for law enforcement.

“I love the hands-on research,” she says. “Maybe I’m just procrastinating with writing. But I got into suspense because I’m fascinated with law enforcement and forensics. I’ve had the opportunity to visit Quantico. The Body Farm. I’ve been to a fair number of prisons too, although I’m not sure if that’s something you can easily work into cocktail party conversation. I’m just a little geeky. The trick is what gets you inspired. I’m looking for that right detail. And you won’t know it until you see it.”

In addition to her writing, Gardner spends a great deal of time working to help homeless animals and at-risk young children with groups in the town where she lives in the mountains of New Hampshire.

She’s also legendary for a sweepstakes contest she runs each year called “Kill a Friend, Maim a Buddy,” where readers get a chance on her website to knock off someone they know in one of her books. Among the “victims” have been spouses, best friends and sometimes even the sweepstakes winners themselves.

“It has gotten to be so funny,” she says, laughing. “On one of the first books I wrote, my agent said to offer something as a prize to readers. Everyone gives away books, so we decided to give away something else: letting readers nominate the ones they love for fictional homicide.”

Here’s how it works, according to the sweepstakes rules on her website:

Have a friend you’re really fond of? Enter her name in the Kill a Friend, Maim a Buddy Sweepstakes and immortalize her forever as a Lucky Stiff. A bit peeved with your boss? Nominate the head honcho and ask your co-workers to do the same. Or if you’re feeling a little suicidal, provide your own name for the grist mill.

Gardner says some of the victims get specific in how they want to be knocked off in her books. “There was one who wanted to be a real tough guy. I made him totally badass and then we killed him. He was very happy.”

So what’s next for Gardner? “I’m starting to write the second Frankie Elkin book,” she says. “It involves the number of missing persons on national public lands. When I talked to search and rescue people about this, their first statement to me was: When you go looking for a missing hiker or camper in the woods, two things are going to happen. You’re going to get a psychic involved—and you’re going to find another body you’re not looking for. There are that many bodies out there.”

Up Close: Lincoln and Child

On the Cover: Jason Pinter