On the Knife’s Edge of Legal vs. Illegal 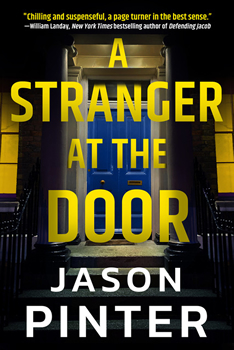 There are tiger moms. And then there’s Rachel Marin, the protagonist in Jason Pinter’s thriller series that bears her name.

Pinter has given Rachel a unique skill set: she has an uncanny ability to see clues that crime scene investigators may miss. She’s also a lethal killer.

And, yes, that makes for one kick-ass helicopter mom.

In the first book in the series, Hideaway, readers learn about her husband’s heinous murder, which was witnessed by her son, Eric. To give the family a fresh start, Rachel has relocated with him and her young daughter, Megan, to the small midwestern town of Ashby, where no one knows her.

“They were all traumatized by it,” Pinter says. “Rachel’s number one priority is protecting her family—getting them away and hiding them. Essentially, putting a rock over them. And yet, she hasn’t gotten to the core of what needs to be addressed.”

Particularly as it pertains to Eric. “If being a teenager isn’t hard enough, dealing with puberty and hormones and his dark feelings means he carries this enormous weight. But he’s never really learned how to heal. And Rachel has never really allowed him, or helped him.” 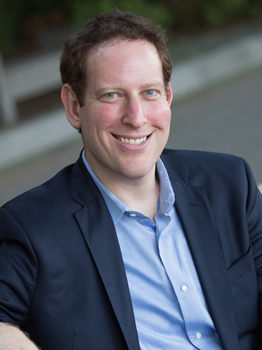 Other parents want their kids to behave and be perfect. Not Rachel. “She has this paradox of wanting her son to be normal,” Pinter says. “In the first book [of the series], she admits that she wishes he’d get into trouble, that he’d go out and act like a normal kid—throw a baseball through a window or something. But he’s still too withdrawn. If their respective traumas aren’t addressed on an emotional level, it’ll stump them emotionally.”

By the second book in the series, A STRANGER AT THE DOOR, Rachel is already viewed as a much-needed asset by her town’s understaffed homicide detectives, John Serrano and Tally.

This gives her leeway to do things that may be considered skirting the law. “She rests on the knife’s edge of legal versus illegal,” Pinter says. “If you read Hideaway, you understand that Rachel has a mistrust of law enforcement for legitimate reasons. But after the events in that book, she’s learning to trust a bit more. She wants to trust others in a way that she hasn’t in a long time. It is a cathartic way for her to re-enter society after a traumatic loss.”

When danger lands on Rachel’s doorstep with the threat of harming her young family, she has a vested interest in solving the heinous murder of a local high school teacher, Matthew Linklater—he was brutally murdered before his home was set afire.

Solving the beloved teacher’s death becomes imperative, especially when it turns out that some of Eric’s classmates may be involved. It is also the catalyst for Eric. He comes out of his shell in a big way—but for all the wrong reasons. 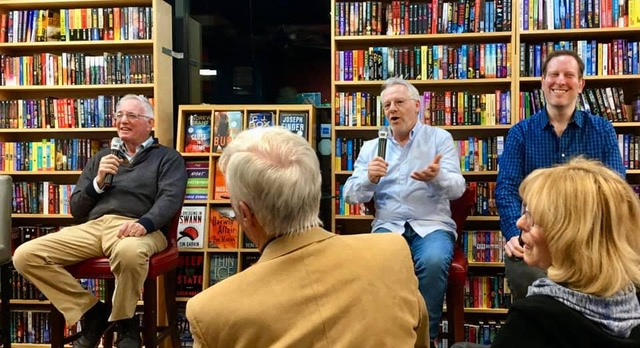 Pinter in conversation with Phillip Margolin and Matt Goldman in March 2020 at the Poisoned Pen in Scottsdale, Ariz.

Sadly, Eric is not the only lost boy in Ashby. And, as it turns out, Ashby has a nefarious Pied Piper. “Bennett Brice is the head of an Amway-esque Ponzi scheme,” Pinter says. “He recruits young boys by telling them, ‘Society lifts up people who don’t deserve it, and you’re going to be left in the dust.’”

His message resonates with many of Ashby’s teens. “In our society, too many 15-to-30-year-old white males feel as if the world has let them down unfairly,” Pinter says. “There is a sense of entitlement, but things aren’t going the way they thought it would go. There is bottled-up anger and rage that gets misdirected at people who they assume are their enemies. They feel these people are taking things away from them: jobs, money, position, or status. I wanted to explore that.”

Brice’s recruits are willing to do some terrible things at their boss’s behest.

“Whenever you do something bad for someone else, it’s not just for kicks. It’s for a reward: more money or some other emotional component,” Pinter says. “Brice tells them: ‘Society doesn’t care about you. I’m here to save you.’” 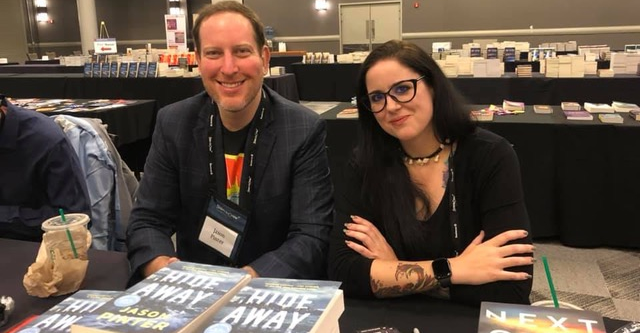 Brice is quite aware that Eric has the perfect M.O. to be recruited. “Here’s a boy who’s looking for direction, who’s angry, has rage. Brice thinks, ‘I can use that. I can exploit that.’”

When Rachel becomes aware of this, she goes into full Tiger Mom mode.

But then an old friend appears on her doorstep: Evie Boggs—a.k.a. Myra—was introduced in the first book in the series. She’s the one person who actually knows what Rachel is running from.

That’s when things get even more complicated. “Evie was Rachel’s confidante, sparring partner, and [martial arts] coach. She whipped Rachel into shape after her loss. Evie was also the first person to get Rachel to open up after her trauma, to let down her guard,” Pinter says. “She comes to Rachel after she’s already moved on, after she’s in this new place. She’s the ‘old friend,’ but when they show up at your door, you know she’s not quite a friend. You know something’s wrong. She’s the combustible element.”

That Evie actually suggested Ashby as the perfect small town in which she could start over gives Rachel every reason to suspect that Evie has an ulterior motive. 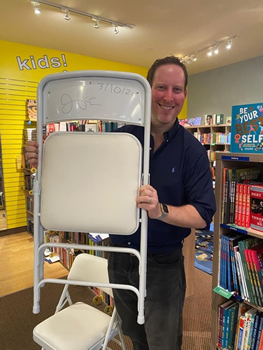 Pinter signs a chair after reading from the first Rachel Marin thriller, Hide Away, at Dallas’s Interabang Books in March 2020.

Really, two, as the reader soon finds out. “Evie is playing both sides,” Pinter says. “She is an antagonist: she delivers a strong warning for Rachel. But it’s to protect the people in her life. At this point, she’s the nitroglycerin in Rachel’s life.”

Will Evie have a recurring role in the Rachel Marin series?

Pinter has no doubt about it. “Occasionally, you’ll write a book, and you assume the character is great for just that story. But then they grow on you. And you think, ‘How can I bring them back? I don’t want to leave this character!’ That’s the way it was for me with Evie. I love the character so much, and the plot between her and Rachel was so interesting.”

While Bennett Brice holds the key to the murder and the mystery behind it, the heavy lifting is done by a couple of cold-blooded goons worthy of a Fargo season: the brothers Randall and Raymond Spivak.

“Brice has a shiny veneer. He’s very professional, very put together, doesn’t lose his cool. He’s a Gordon Gekko,” Pinter says. Whereas Brice is the business’s clean, shiny veneer, the Spivak brothers are its dirty side. “When you lift up the rock, they’re who’s under it.” 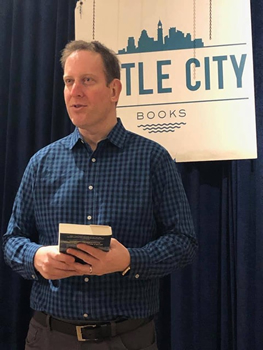 In fact, the Spivaks are written so darkly that every time one enters a scene, the reader can’t help but feel a sense of dread, especially if it’s one with the boys who’ve been recruited by Brice.

And Rachel’s assistance with the police puts Eric in their crosshairs.

Even Pinter’s secondary characters have complex lives. For example, Rachel’s other, much younger child, Megan, is the counterbalance to Eric. Too young to remember her father’s death, she’s happier and more hopeful about her family. She loses herself in the action-adventure stories she writes about a young heroine. “I ask myself, ‘What do they like? What are their interests?’ Megan writes these little ‘Sadie Scout’ books, but at the same time, that’s who her mother is. She’s an action hero.”

With Sadie, everything ends up perfect at the end of the day. Life isn’t as neat and tidy for Rachel. “When you’re six years old, you think of your parents as superheroes. When you get older, you see the cracks in their foundation. You know your parents mean well, but they’re not superheroes. They’re just people.” 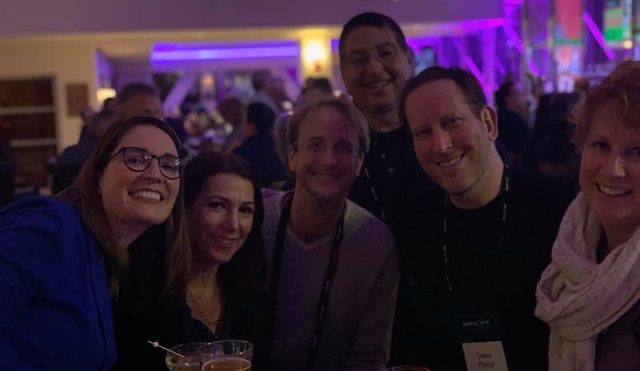 The one character who is an open book is Rachel’s love interest: homicide detective John Serrano. Whereas Rachel won’t hesitate to use whatever means necessary to bring about justice to solve the murder. Serrano lives up to his duty to follow the letter of the law.

Needless to say, despite the tremendous passion between them, this puts a strain on their relationship.

Pinter relishes their emotional conflict. “In the first book, I knew I wanted her to butt heads with Serrano and Leslie Tally,” he says. “At the same time, I didn’t want them to be the stereotypical cops. They are real people, with backstories and families. The reader learns that John has suffered a tremendous loss. He is not a lighthearted guy. His loss weighs on his neck every second of the day. That’s why Rachel connects with John. Then again, Rachel has a very legitimate distrust of law enforcement. But when she learns more about him—when she starts seeing him more like a human being than a cop—a little bit of that trust starts to come back because she knows his heart is in the right place. She starts having feelings for him beyond that.” 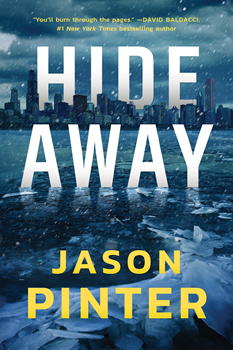 Pinter realizes their tentative relationship is essential for the success of the series. “Rachel is not a normal person by any stretch of the imagination. She’s not just ‘a woman you date.’ She’s always on guard and very protective, which is why she’s been unwilling to bring someone into her life.”

And yet, their relationship is electric. “These are two people with a lot of baggage. Either it will weigh them down to the point where they can’t move on together, or they’ll learn how to carry it.”

So much for finding peace and quiet in a small town.

“One of Rachel’s follies is that she was looking for the ideal place to run away with her children, somewhere she wouldn’t be bothered. But the more she puts herself out there in the community, the more she discovers this is not Pleasantville. There is no such thing as ‘a perfect town’ with the white picket fences and the two-point-two children. Every town has a backstory. Every town has darkness. When was America ‘better’? What is fine for one person may be awful for someone else. I love the notion of Rachel uncovering all these little secrets of the town that she didn’t know about before she moved there.”

“Unless she burns it all down,” Pinter teases. “We shall see.”

Josie Brown’s latest novel, Assassination Vacation Planner, is the 20th book in her Housewife Assassin series. You’ll find her at JosieBrown.com, where you can also listen to her Author Provocateur podcast of writer interviews.