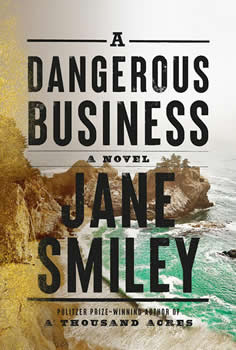 Adventurers whose gold-rush fantasies have been crushed. A prim whorehouse madam whose strict rules are readily adhered to by her girls and patrons. Two hookers with hearts of steel.

In Jane Smiley’s historical mystery, A DANGEROUS BUSINESS, two ladies of the night—sweet but stoic Eliza Ripple and her feisty pants-wearing sidekick, Jean—must chase down a serial killer on the loose in the hills of 1850s Monterey, California.

It was only after the Pulitzer Prize-winning novelist turned in her manuscript to her publisher— Knopf—that they came up with the title for this book, Smiley says. “As my editor and I read through it, we came to the line where the madam, Mrs. Parks, says, ‘Everyone knows that this is a dangerous business, but between you and me, being a woman is a dangerous business, and don’t let anyone tell you otherwise.’”

From the mouth of the novel’s soft-spoken albeit no-nonsense madam, a title was born.

It’s an apt homage to the number of colorful and seedy characters who populate the novel, which combines Smiley’s inimitable author’s voice with her love of the Northern California town and its rich history.

Not that the region wasn’t filled with cities even more perilous. “You could always run into someone who could do you in, but Monterey was a smaller community. In other places, there was more stuff to steal,” Smiley says. “The gold was elsewhere, so he’d probably be up in San Francisco or the gold country.”

In fact, Smiley says, “My research showed me that women were treated fairly decently [in Monterey].”

Throughout the years, the town has been steadfast in renovating its beautiful old Victorians. This has allowed Smiley to paint a realistic picture of Monterey in the pre-Civil War era. “One of the terrific things about writing this book was getting to walk around Monterey and looking at the buildings and their historical plaques to get a sense of what it would be like for Jean and Eliza. The weather is similar now, too, so you think, ‘Oh… this is what it must have felt like!” 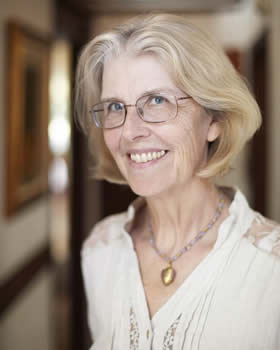 Smiley gives her protagonist, Eliza, a great backstory: Hailing from Kalamazoo, Michigan, she is forced into a marriage to a ne’er-do-well by her strict, religious mother and a father who wants one less mouth to feed. Although the reader quickly learns that Eliza’s husband, Peter, died in a brawl almost immediately after their arrival, she is determined to stay in Monterey. Eliza is mesmerized by the peninsula town’s warm climate and lush vistas. To the east, its rolling hills are crisscrossed with thickets of brush, ravines, and creeks. By the time they reach the deep blue Pacific Ocean and its tangerine sunsets, they’ve risen into cypress-studded ragged cliffs plunging into slim sandy beaches.

Eliza quickly embraces Monterey’s unorthodox Wild West lifestyle. As a young widow in a town with too few single women and little recourse to make a living, eventually she realizes that working in one of Monterey’s local brothels is her best way to keep from starving. “She wants to stay,” Smiley says. “She doesn’t want to go back to what she was stuck with before.”

The author’s research into Monterey’s whorehouses proved that they were nothing like the one depicted in the television show Deadwood. “Mrs. Parks had to care about her workers’ safety. The brothels had guards. I show that Eliza’s work is not as horrible as we sometimes assume it is.”

Smiley allows Eliza’s interests in her customers to reflect the readers’ curiosities about them by giving each a distinct personality. “That was a lot of fun for me,” Smiley says. “So many of the men were just passing through the town.”

Eliza’s role for her patrons runs the gamut: Whereas some see her as a quick physical release, she is a girlfriend or a sister to others.

In one case, she’s even a teacher. “That was one of my favorite bits: when a dad brings in his son, and her job is to open him up to this world,” Smiley says. “She wants to do it in a nice way so that he’ll be a good lover.”

Another of her younger clients, who plans to study medicine, only wants to explore her body.

On the nights Eliza isn’t working at Mrs. Parks’s brothel, she goes home to her rented room at a boarding house run by a kind older widow—Mrs. Harwood—who suspects her livelihood but doesn’t pass judgment.

On Eliza’s days off, she goes horseback riding with her friend Jean, another sex worker who is employed at a brothel that caters to women and thinks nothing of wearing pants—sometimes unrecognizably while in full drag. When Smiley had a local historian vet the novel for accuracy, she specifically asked if such an establishment existed. They didn’t find one. “But he was very painstaking,” Smiley says. “Although he couldn’t verify a brothel catering to lesbians, he did say: ‘That’s plausible. Go ahead.’”

On one of their rides through the Monterey hills, Eliza and Jean see a dead body floating in a creek: that of a young woman.

This murder—and that of a few other single females whose bodies show up around the town—holds no interest for the local constabulary. “Any investigation would be a lot more difficult than it is now,” Smiley says. “There was a local sheriff, but they weren’t as well organized in those days. The population came and went because there were other places people thought would be more profitable. And, as Jean points out, ‘They care about property owners and the people they know. What do they care about us?’”

This makes Eliza and Jean all the more determined to right this egregious wrong—and to set a trap for the killer.

Eliza’s anxiety heightens when she realizes the perpetrator could be anyone. Maybe it’s one of the town’s supposedly upstanding businessmen. Or a sailor whose ship brings him to town periodically. It may be one of the ranchers whose homesteads are just a few days’ ride from town. Every john who walks through Eliza’s bedroom door is scrutinized for clues that he may be the killer.

These amateur sleuths make their fair share of mistakes. But they also have great instincts for solving the whodunnit, and each has a different but much-needed skill set: To set the trap, Eliza must be the bait, and Jean is the muscle.

“I don’t think Eliza would have done it without Jean. She feels safer in her company,” Smiley says.

For good reason: As possible suspects move to the forefront, the women’s mettle is severely tested. “We don’t immediately find out why Jean is as brave as she is,” Smiley says.

Because Smiley has set her story in the years before the American Civil War, slavery and abolition are front and center in the hearts and minds of her characters. “When I did the research, I realized many people came West to get away from the issue. One of my favorite moments is when Eliza and one of her favorite clients are sitting in a restaurant, and he points out that the Mason-Dixon Line could be running across their table. Whereas at first Eliza isn’t aware of the debate, the more people she meets and learns about slavery, she then forms an opinion.”

Smiley also makes the reader aware that a brothel worker’s livelihood has an expiration date. “Eliza and Jean are both young. In your early twenties, your job is to grow up. They still have hobbies, likes and dislikes, and thoughts about the people and places around them.”

But to get to some grand old age that will allow them to look back fondly at this time in their lives, the women must survive the killer who has turned his sights on Eliza.

Smiley doesn’t make it easy for the reader to sniff him out. “The most important thing about a mystery is that readers cannot guess who it is. Otherwise, why keep reading? They’ll toss it.”

For Smiley, her choice of killer was an “Ah ha!…” moment. “Some books have to be carefully plotted. Others have developed on their own. A DANGEROUS BUSINESS falls in the latter category.”

Smiley’s next book will be a family drama. While each of her novels is different, her readers love what they share: compelling plots, realistic dialogue, and great characters.

A DANGEROUS BUSINESS is no exception. With the addition of a stomach-churning mystery, you’ve got your next great read.