The Terrorist in Your Cabana House 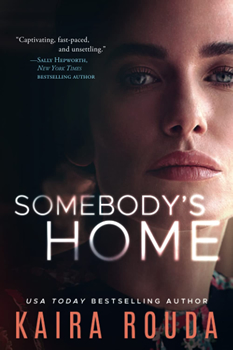 Not only that, but he’ll do everything he can to make you disappear instead.

The story’s plot came to Rouda during the first COVID-19 pandemic lockdown. “We feel pretty safe staying home. Still, as we write, we have a tenseness about us the whole time. As a thriller writer, I had to flip that notion on its head: ‘What if your dream home isn’t what you think it is, and the reason for this is out of your control?’”

In the case of Rouda’s protagonist, Julie, she is blinded by the steps needed to be taken to get out of her old house—and her former life: Julie is also leaving her marriage to her husband, Roger, a manipulative captain of industry whose take-no-prisoners mindset extends to total control of his wife and their 17-year-old daughter, Jess. When Roger discovers she’s missing, he’ll do everything possible to get her back. This includes cutting off all sources of money and bribing their daughter to stay with him.

Julie’s attempt to flee to her own newly purchased haven may be the story’s catalyst, but it’s grounded in the trauma of the previous owners’ relationships: Sandi is also estranged from her husband—an evangelical pastor, Doug. Besides the fact that he’s had intimate relationships with members of his flock, throughout the years he’s taken out his anger over his first wife leaving him on the young son they had together, Tom. 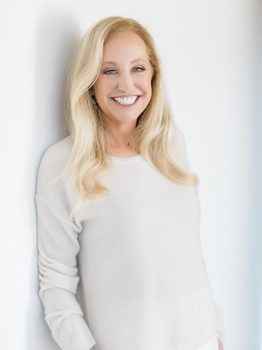 This breaks Sandi’s heart. But now that Tom is in his twenties, his hurt over his father’s hard-hearted rejection has curdled into an anger that has seared to ashes his relationship with his stepmother.

No way in hell is he moving from the only home he’s ever known, especially since it’s the one place his wayward mother would know to find him.

His solution: to stay the master of his domain. In this case, the cabana house.

Though the surgically enhanced trophy wife from the posh side of the tracks and the meek preacher’s wife from its seamier side may seem as different as night and day, Rouda has made clear that the women share one stark similarity: Their children mean the world to them.

“It’s a story about moms. It comes down to choices they have to make about their relationships and their husbands,” Rouda says. “But everything is about protecting their kids.”

The women’s insecurities are deep-set. In Julie’s case, even before meeting Roger, she’d abandoned her place of birth and her religion before taking the ultimate step to put her past behind her completely, including a full surgical makeover. For Sandi, it means playing the submissive wife. Even as Doug doubles down on his digressions, she relies on prayers to absolve her husband of his narcissistic quest for power in his church. 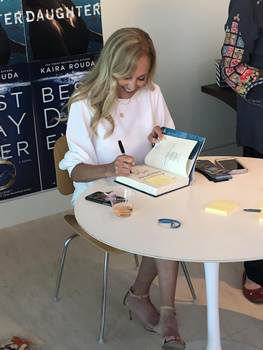 Rouda signs books at a launch event for her 2019 thriller The Favorite Daughter in Laguna Beach, Calif.

“I’m a pantser, and my characters just pop into my head,” Rouda says. “It usually starts with the notion of belonging. Julie has changed everything outwardly. She’s moved across the country and attempted to build a career. But then she found Roger, whom, she felt, was a fast path to everything she’d always wanted: money, prestige, and a beautiful home. By the time the reader meets her, she’s already trapped in this gilded cage of her own creation. Realizing it’s a trap, she must save herself and Jess, who is a senior in high school. She’s almost waited too long. Her daughter will soon be off to college. Julie knows it’s now or never.”

Tom was the first character that came to Rouda. “Just the notion of being left with a father like Doug at an early age can be destructive. As a stepmom, Sandi did everything she could to make him feel loved and at home, even as she and Doug went on to have other sons. With the disappearance of his birth mother, Tom already has a foundational hole in his heart. And then rejected by his own dad—who feels he’s a loser, who doesn’t understand him, who doesn’t think he’ll amount to anything. All of this, together, makes Tom very vulnerable to outside influences. It’s about belonging. He wants to belong.”

The friends he chooses are incels. “These are men who have decided that women are to blame for everything. If you succumb to letting a woman into your life, they will ruin you.” 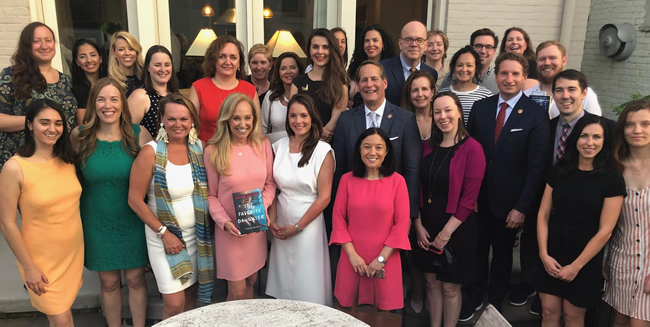 Rouda, whose husband is former US Rep. Harley Rouda, with fellow congressional wives in DC for the launch of The Favorite Daughter in 2019.

When Julie and Jess move into what Tom considers to be his home, his attraction to Jess rachets up the tension as well as the action.

“Jess has grown up in a very privileged environment and has been sheltered all her life. Her father can pay for anything she wants. It’s how he shows her affection. She’s yet to see the darker side of the world—and has chosen not to. That’s how she’s been raised, so it’s not her fault that she’s very naïve and not at all worldly.”

Her naivety puts her in the wrong place at the wrong time. When Jess trips up, it’s a doozy. (You’ll have to read the book to learn where, what, and why.) 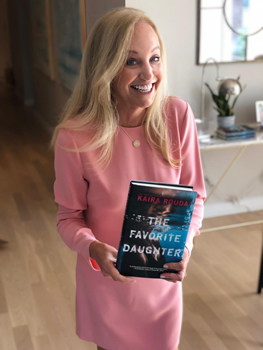 Rouda at a launch event for The Favorite Daughter in Washington, DC

But in Jess’s world, helicopter parents are always circling overhead to cushion their children’s tiniest falls from grace.

Having seen it firsthand, Rouda knows how to use their foibles as a plot element. “It doesn’t matter where I set my stories. Be it Columbus, Ohio, or Dallas, Texas, wherever there is privilege or entitlement, you find that attitude: ‘I’m going to do whatever it takes so that my kid is the best at whatever. I’m going to protect them no matter what.’ Their children don’t experience consequences because it might tarnish their record, or their scholarship will vanish. But it doesn’t work in their children’s best interests in the long run.”

Jess may know designer brands, but she doesn’t know Tom’s dark world. Hearing her bemoan the consequences of her actions plays right into his fantasy of their happily ever after.

But first things first: Tom is on a mission to prove himself to his buddies—which means getting revenge on those who are taking away what he rightfully feels is his home.

Rouda took a deep dive and began doing research on all the domestic terrorist groups and how they’re connected in the dark web. “I sat in on a few Congressional hearings to hear experts on global white supremacy. It’s not just a domestic [problem]. In fact, it’s a network of global domestic terrorism. As far back as Timothy McVeigh, there is a direct line from his bombing—which we thought was a ‘lone wolf’ one-off—to everything that has happened subsequently and continues to happen.”

Rouda likens acceptance to these factions to a gang initiation. “Again, it comes back to the notion of belonging. To belong to this group, he needs to do this.”

When not meeting in person, Tom’s new posse communicates via code names and connect on the dark web. “They want to know he’s capable of doing what they’ve ginned him up to do,” Rouda says. “They’ve equipped him. They’ve trained him.”

But Rouda makes it clear: “He’s imagined himself doing this. ‘These people in Europe did this, but I’m going to do it even better.’ There’s a lot of ways to get attention in the world. He’s made his own choices. And they’re not the best choices.”

Not by a longshot.

The climactic ending allows for redemption for the parents’ bad deeds. “This is probably my darkest climax scene,” Rouda says. But her next confession gives credence as to why she is the true mistress of her psychological suspense: “I love keeping people up late at night and shedding light on some topics along the way.”