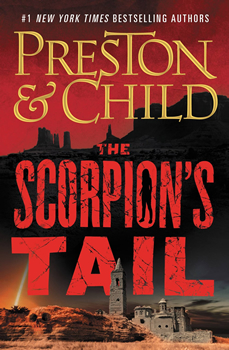 In 2019, Douglas Preston and Lincoln Child introduced their fans to a new series led by archaeologist Nora Kelly and FBI Special Agent Corrine Swanson in the bestselling book Old Bones. Now, the authors bring the duo back for another adventure in THE SCORPION’S TAIL.

This time around, a mummified corpse from the ’40s is found in a remote New Mexico ghost town. Corrie and Nora must work together to figure out this daunting mystery that connects with an important date in American history.

“We wanted this novel to be a quintessential New Mexico story,” Preston says, “since Corrie has just taken up her first job at the Albuquerque Field Office of the FBI. A body is discovered in a remote ghost town at the edge of the fearsome Jornada del Muerto—Journey of the Dead or Journey of Death desert, north of the White Sands Missile Range. Corrie investigates and asks archaeologist Nora Kelly to excavate the corpse to determine if it’s a homicide or an accidental death. The corpse, which is 75 years old, shows evidence of a very strange and agonizing death—and a fabulously valuable golden cross is found on it.”

The authors have set previous books in New Mexico—in fact, Thunderhead is where Nora Kelly is first introduced. Preston has personal knowledge of the area, given his long trips on horseback across such remote locations that provide a great verisimilitude that has resonated with readers. Each one of the Nora Kelly books will feature a cameo appearance by FBI Special Agent Pendergast—but that’s it.

“As we developed the series,” Child says, “we realized that it would be beneficial to base it on characters who were already familiar to and popular with our readers. Almost inevitably this meant some connection to Pendergast. We do plan to have him continue making these cameos—at least as long as credibility and logistics allow us to.”

While in real time over a year has passed, it’s been only months since Corrie and Kelly met within the book’s narrative.

“Corrie is still a rookie FBI agent and hasn’t found her confidence yet,” Preston says. “The book opens with a very unfortunate shooting incident that only puts Corrie more on the defensive.”

“But,” Child adds, “by the time SCORPION’S TAIL ends, things have changed quite significantly for at least one of the two women. It’s our intention in this series to keep their professional and personal lives as fluid and exciting, if possible, as their joint adventures.”

The series is based on the intersection of archaeology and crime. The plot for THE SCORPION’S TAIL has its origins in some of Preston’s past.

“The impetus grew out of an experience I had in 1995,” Preston says, “when I was writing a story for New Mexico Magazine about the 50th anniversary of the Trinity Test, the first atomic explosion, which took place in the Jornada del Muerto desert. I had a chance to see the Trinity Site and spent a week on the White Sands Missile Range. I later crossed the Jornada desert on horseback—120 miles. Linc added many valuable ideas to the mix.”

As both Preston and Child have backgrounds in archaeology, that knowledge permeates  the story. Preston finds the subject of forensic archaeology fascinating and has previously written about it for The New Yorker and Smithsonian.

“We’ve always tried to make our thrillers not only entertaining, but educational—hopefully, without being didactic,” Child says. “Most particularly, we like immersing readers in environments they may be unfamiliar with, and come out knowing more about subjects relative to that environment…and the research often gives us a chance to learn more, as well! The Nora Kelly series allows us to bring in the two fascinating fields you mention—forensics and archaeology—and leverage them not only for their intrinsic interest, but also for the credibility they add to the stories. The books are most definitely fiction, but a lot of the scientific techniques we describe are not.”

While most booksellers list the series as Nora Kelly’s, Corrine Swanson shares the spotlight. So who is the series really about?

“That’s a good question,” Child says, “and one that’s hard to answer. We didn’t realize Corrie was going to have such a prominent role. My recollection is that at the time we initially decided to retire Gideon Crew and start a new series, we settled on Nora Kelly as an existing character of ours whose background and occupation would make an excellent heroine. She after all had been around and was well established in the Pendergast universe. Practically the moment we began actually plotting Old Bones, however, we realized that having Nora team up with Corrie—willingly or not—was almost a no-brainer.”

The future looks promising for Nora and Corrie, but also for Pendergast, as the authors are currently finishing the next novel in the series, titled Bloodless, which is set in Savannah, Georgia—a favorite town for both Preston and Child.

“We’ve given Savannah a passing swipe in earlier books,” Child says. “But we felt it was high time we gave such a beautiful, historic, and atmospheric setting our full attention.”