Getting Past “Stage Fright” After Debut Success 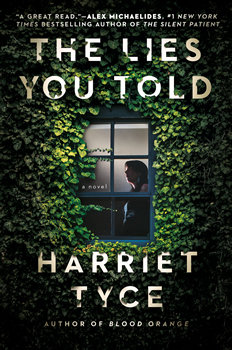 In the acknowledgements of her new release, THE LIES YOU TOLD, Harriet Tyce says that “second novels are difficult.” It’s a sentiment that many writers can relate to, but in Tyce’s case the success of her first added pressure. Her debut, Blood Orange, was a huge international success with readers eagerly awaiting her next offering.

It’s safe to say that her readers won’t be disappointed.  THE LIES YOU TOLD is an engrossing, twisty psychological thriller that has the capacity to surprise right up to the very last page.

Sadie Roper and her daughter, Robin, have moved back to London from the US to settle into Sadie’s late mother’s house. Their move has been an escape rather than a fresh start, and it seems that darkness is pursuing them. While Sadie struggles to rebuild her previous successful career as a criminal barrister, she and Robin are met with open hostility from the tight-knit group of mothers at the new school gate. Things seem to take a turn for the better when Sadie lands a high-profile case. But this being a Harriet Tyce novel, it’s not a spoiler to say that it involves yet another dark turn.

While the book will be devoured by her many readers, it was the idea of such a large audience that Tyce found daunting when embarking on writing it.

“One of the hardest aspects of it was learning how to write when I knew the book was going to be read, I think,” she says. “When I wrote Blood Orange, it was written with an audience of about 15 people in mind—my tutors on my master’s and my fellow students. By the time I came to write THE LIES YOU TOLD, I had been introduced to the world of reviews and readers, and it took me a long time to get rid of my nerves and my feeling of self-consciousness so that I could get back close to the writing without always looking over my shoulder. I’ve been blown away by the reception that Blood Orange has received, but it has taken a bit of getting used to!”

The first kernel of an idea that Tyce had was the setting. “The horrors of competitive parenting and the way that the school gate can be such an unfriendly, toxic environment. In order fully to explore that, I needed to bring in a character, Sadie, who was new and awkward and socially uneasy.” Sadie is indeed flawed, but that makes her very relatable. As the tension escalates, and her life becomes ever more complicated, we are rooting for her and her daughter.

Not every complication was mapped out in advance.

“I am a mix of planner and pantser,” Tyce says. “My initial plan is generally very detailed, but once I start writing it often takes on a life of its own and veers off in directions that I had not previously considered. I tend to stop and replan at various pivotal stages. The revelation at the very end was completely unplanned and presented itself to me at the moment at which I wrote it, which was very pleasing indeed, even if I was taken entirely by surprise!”

The risk of spoilers forbids any discussion of that revelation, but rest assured that it’s one that rocks the reader as well.

It can be revealed, however, that the plot involves a trial where there have been allegations of grooming and abuse of an underage girl by a man in a position of trust. Tyce’s past professional life as a criminal barrister clearly shows in these tense scenes, along with the emotional challenges and demands of the job. She acknowledges that it’s a high-pressured environment.

“There’s no escaping the emotional toll, and there isn’t necessarily a great deal of external support offered, either,” she says. “Criminal barristers can be exposed to some truly horrific material, and it’s to be hoped that they have the support from their colleagues and family to be able to work out how to process it all without recourse to destructive behaviors of their own. Gallows humor helps a lot, too, rather as it helps doctors.”

It’s also fascinating to view the court through the eyes of somebody who has faced one. Juries, for instance, are often portrayed as a bland, uninteresting group in many dramas and movies. Yet Sadie is constantly reading the group and their reactions.

“I was always aware of the potential for jury members to make snap judgements based on external factors (for example, what they thought of how a witness might dress) and again I thought it might add to the texture of the courtroom scenes to have Sadie try and read their faces,” Tyce says. “By and large, juries I had in the trials I worked in responded in a mostly predictable way, and I know from friends who have sat on juries that people take their responsibilities very seriously indeed.”

Speaking of taking responsibilities seriously, this pandemic year of 2020 has posed enormous challenges for many. Writers are no exception, with many finding that their creativity is challenged in the face of such overwhelming events. Tyce reckons she was fortunate that she was at the editing stage when the pandemic struck.

“I don’t think I was capable of any writing from scratch at any point really between about March and June,” she says. “I was able to work my way through LIES, though, and it was good to have that work to do. I found it very difficult even to read, I have to say. I am a bit more settled now, and I’ve made a start on my new book. I’m finding the escape of that world very welcome indeed as I sit through another lockdown in London, looking forward to spring and the hopes of maybe some normality next year.”

That third book is another psychological thriller. “A woman makes a promise to a dying friend but soon finds everything she holds most dear under threat of destruction. It is set partly in my home town, Edinburgh, and I’m loving writing it,” Tyce says.

Even better, now that the “difficult second novel” is out of the way: “I am worrying a lot less, which has to be a good thing!”