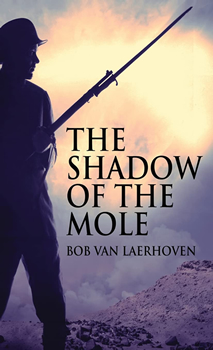 Author Bob Van Laerhoven brings us a historical mystery in his latest work, THE SHADOW OF THE MOLE.

It’s 1916, Bois de Bolante, in the barren French region of Argonne. The war in the trenches is raging fiercer than ever. In a deserted mineshaft, French sappers discover an unconscious man. The troops nickname him The Mole. The Mole claims he has lost his memory and asserts that another has taken his place. Front physician and psychiatrist-in-training Michel Denis suspects that his patient’s odd behavior stems from shellshock and tries to save him from the firing squad.

The Big Thrill recently checked in with Van Laerhoven to discuss this latest release and how it came about.

The character of the young French psychiatrist Michel Denis who lost an arm in the trenches of WW1 definitely came first. The setting—WW1—followed, of course, automatically. The plot of this multi-layered mystery novel gave me more headaches, but eventually came naturally.

Life is a mystery in itself. So many strange things are happening under the seemingly dull layer of everyday “reality.” If a writer can connect with the forces of the subconscious, he finds an artistic wealth of unexplored universes.

To write THE SHADOW OF THE MOLE, I had to become familiar with the state of psychiatry in WW1. That meant a lot of studies but provided me with the most significant opportunity: transmitting the mental suffering and the loss of the self in people exposed to the horrors of war.

I knew, as anyone does, that humans cling to life but, while writing this book, I learned how bizarre this life-will of ours is in certain extreme circumstances, like, for instance, a war. WW1 was the first “mechanized” war in history and caused terrible suffering in the ranks. In a certain moment, The Mole says to psychiatrist Michel Denis: “The will to live is a disease.” The character had spoken. Not I.

There is a hint to the paranormal in the novel, but it is presented in such a way that the reader doubts if it is “real” or the distorted world view of a schizophrenic mind.

I’m very fond of classic literary stylists like Gustave Flaubert, Edmond, and Jules de Goncourt, but also in the younger generation Philip Roth, John Cheever, Toni Morrison, John Steinbeck…In the even younger age of literary authors, I like Ian McEwan, Anthony Doerr, Peter Carey, and Sebastian Faulks. I also admire authors who effortlessly mingle a literary style with a suspenseful story, like R.J. Ellory and Robert Harris, to name just two. I could go on for days, you know. The authors who inspired me have shown me the path of the “cross-over” novels between literature and the suspense genre that I try to write.

Your books tend to be multi-layered and therefore not the easiest around. Why is that?

Because life is multi-layered when you begin to see the golden thread beneath your feet (stolen from the novel Steppenwolf. Thank you, Hermann Hesse).

A full-time Belgian/Flemish author, Van Laerhoven has published 43 books in Holland and Belgium. He explored trouble-spots across the globe from 1990 to 2003: Serbia, Somalia, Liberia, Sudan, Gaza, Iran, Iraq, Myanmar, Mozambique, Lebanon, Burundi, and Kosovo, to name but a few.

• Four-time finalist of the Flemish Hercule Poirot Prize for Best Mystery Novel of the Year with the novels Djinn, The Finger of God, Return to Hiroshima, and The Firehand Files.
• Winner of the Hercule Poirot Prize for Baudelaire’s Revenge, which also won the USA Best Book Award 2014 in the category “Mystery/Suspense.”
• In 2018, Crime Wave Press published Return to Hiroshima, after Baudelaire’s Revenge, his second novel in English translation.
• His collection of short stories, Dangerous Obsessions, first published by The Anaphora Literary Press in the USA in 2015, was hailed as “best short story collection of 2015” by the San Diego Book Review. The collection is translated into Italian, (Brazilian) Portuguese, Spanish, and Swedish.
• In 2018, The Anaphora Literary Press published Heart Fever, the second collection of short stories. With this collection, Van Laerhoven became the only non-American author to be selected as a finalist in the Silver Falchion 2018 Award, in the category “Short Stories Collections.”
• In addition, the quality English book site Murder, Mayhem & More chose Return to Hiroshima as one of the ten best international crime books of 2018. Readers’ Favorite rated the novel Five Stars.
• In August 2021, Next Chapter published the third novel in English: Alejandro’s Lie, set in a fictitious Latin-American dictatorship. Best Thriller Book Awards winner in the category ” Political Thriller 2021” on BestThrillers.com