Writing Characters That Stand Out 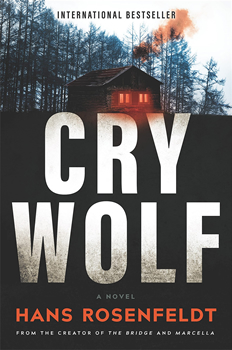 A thriller that opens with the discovery of human remains in the stomach of a dead wolf, a drug deal that ends with multiple bodies, and a female assassin on the loose is a novel guaranteed to grab a reader’s attention. And when the setting is Haparanda in Northern Sweden and the author is Hans Rosenfeldt—creator of the TV series The Bridge as well as Netflix’s Emmy Award-winning Marcella—thriller fans know they’re in for a real treat.

CRY WOLF is the first book in a new series by Rosenfeldt. The novel is populated by several memorable characters and the intricacies of their lives and interlinked storylines. Central to it all is middle-aged police officer Hannah Wester, a character that readers are sure to engage with. In the midst of the summer heat and an increasingly complex and violent investigation, she’s having to deal with menopause, which is not a common issue for most thriller protagonists.

Rosenfeldt says he likes writing characters from a female perspective and that he made a conscious decision to place Hannah at this stage of her life. “We live in a society where youth is desirable, you want to be young and if you’re not, you want to look young, act young, so there aren’t a lot of stories where a 54-year-old, rather ordinary woman is the main protagonist, and I wanted to change that. There’s a lot of crime being written and read, so it’s a way for me to stand out from the crowd a little, and I also think that there are a lot of readers who can identify with Hannah.”

The other standout character is another woman, the younger and deadly Katja. It’s impossible to look away from what she is about to do next. Despite her murderous ways, the reader ends up rooting for her, and Rosenfeldt intended this from the start.

“To create a villain that is not just ‘evil’ or a psychopath, you must spend some time with them, in their heads, kind of understand them, and not just depict their actions,” he says. “And if you want the reader to actually root for them, I’d say one of the most important things is to not let the villains enjoy what they do. Katja does not particularly enjoy killing. She’s very, very good at it, but she didn’t choose to become an assassin. She was forced to be one and doesn’t know anything else. And this rather tragic backstory, or any backstory that gives characters a believable motive for their actions apart from just being ‘evil,’ is helpful when it comes to creating an appealing antagonist.”

Speaking of motives, Rosenfeldt knows precisely where his characters are headed and how his intricate, twisty plot is going to pan out. “Since I come from writing for television where there’s usually more than one writer involved, I am used to creating more or less complete storylines before actually writing the scripts. I do the same when it comes to my books, so yes, I know where I am going once I set off. I have the story beaten out almost chapter by chapter on Post-it notes.”

But he acknowledges that he’s also open to new ideas when he starts writing, those new opportunities that present themselves as part of his creative process. That creative process for CRY WOLF was slightly different from his previous projects, in that this is his first solo book.

“To write alone was much harder than I thought it would be,” he says. “I am used to collaborations, to have someone who knows the story and the characters as well as I do, that I can ask for help and input when I need it. Not having that on CRY WOLF was… difficult.”

Those difficulties aren’t apparent in the finished work, which keeps the reader guessing through multiple plot shifts and viewpoints. The setting of the city and environs of Haparanda also deserves a mention. Several reviewers have commented about how Rosenfeldt has given Haparanda its own point of view and how effective that is. For those who don’t know, the city is on the northerly extreme of the Swedish coastline—so far north that there’s almost constant daylight at the height of summer—and right on the border with Finland. Rosenfeldt’s decision to locate the action there was partly a result of this being a solo project.

“My other novels, which I write with my colleague Michael Hjorth, don’t take place in any specific city or region,” he says. “We let our investigators move around Sweden. A different location for every book. So when I went solo, I wanted to separate myself as much as possible from our books and decided I wanted to place it somewhere. (That’s also one of the reasons why my protagonist is a woman—in my and Michael’s books, it’s a man.)”

“Then, when I was looking for a setting for the novel, I remembered holding a lecture in Haparanda some ten years ago and thinking it was a really cool place. So I went up there, did some research and found that, yes, it is still a cool and fascinating place. And a fun fact: Karungi (just a couple of miles north of Haparanda, population 200) had the biggest post office in the world during the First World War.”

As already mentioned, Rosenfeldt has had major TV successes with The Bridge and Marcella, and now CRY WOLF is set to reach the small screen. While he’s working on the adaptation, Rosenfeldt did not write the novel with that in mind. “I don’t spend any time or thought on how to make my books more ‘screenplay-friendly,’ and I don’t change anything. But I come from television and have heard that I—without thinking of it—write rather cinematically.”

Rosenfeldt has more projects in the works as well. “At the moment, I’m adapting three books for television. My own, CRY WOLF, Astrid Lindgren’s Ronja the Robber’s Daughter, and C.J. Tudor’s The Burning Girls.”

And back on the novel front, those intriguing questions left hanging at the end of CRY WOLF should be answered. “I am also working on the follow-up. So Hannah Wester will be back, hopefully next fall. Where she will have to deal with a cult, a dead baby found in the woods, and her own past once again.”