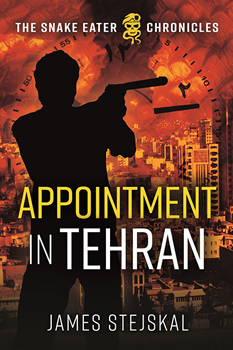 “My fiction blends fact, that is things that have happened, with different people and locations. So many of the things in my books happened—just not exactly like I write them,” Stejskal says. “I think it gives the ‘fiction’ more realism. That’s a complicated way of explaining what Albert Camus said: ‘Fiction is the lie through which we tell the truth…’”

Ennobling the what-if at the core of fiction, APPOINTMENT IN TEHRAN, Former Special Forces operator and CIA Operations Officer James Stejskal’s second novel in The Snake Eater Cold War military-espionage series, is the sequel to A Question of Time.

A frustrated American president had hoped an audacious rescue plan would bring the Americans home and renew his presidency. When the mission goes south, a lone operator is left with the responsibility of rescuing the tactical nuclear weapon that had been hidden in Tehran to interdict the Soviet invasion of Afghanistan. In the chaos of the embassy takeover, a Russian agent discovers the identity of the US operative responsible for the hidden tactical nuke. Along with rescuing embassy hostages, the special Snake Eater members are tasked with infiltrating enemy lines and extracting the nuke before either Iranians or Russians capture and use it against America. Getting it in was easy. Getting it out …

Liz Robinson, in LoveReading, praised Stejskal’s writing for being “thrilling, riveting, and whip-smart … feels as though you are being served a slice of Cold War military history.”

Doug Stanton, #1 New York Times best-selling author of Horse Soliders, says: “A Question of Time takes us where few authors, soldiers, or citizens of any country have gone, deep behind enemy lines at the hottest moments of the Cold War. We are dropped into the world of an intelligence operation that even today is unknown to most of us. Stejskal worked—and survived—in this world and returned with this story masterfully told. This is espionage at its page-turning best, rich with history, operational intrigue, and drama.”

With APPOINTMENT IN TEHRAN, that waiting has come to term.

Stejskal’s 35 years as a soldier and intelligence officer, military historian, scholar, and literary craftsperson ensures steady appreciation. In addition to APPOINTMENT IN TEHRAN, his second Cold War spy thriller, he has also authored four non-fiction military history books, including Masters of Mayhem, a study of Lawrence of Arabia and the inception of modern British unconventional warfare. He has been honored with a Silver Medal by Military History Matters.

Stejskal says APPOINTMENT IN TEHRAN will provide readers with an “appreciation of the teamwork, effort, and planning that goes into military operations—and the small details that can upset them and change history.”

He chose the thriller genre because “It’s something I have lived and now want to share with my readers. I think I can bring a certain amount of authenticity to telling these stories, which are based on actual events. … Fiction also gives the US government a fig leaf to say: ‘It never happened.’”

“The challenge?” he says. “Dealing with the US government censors. It requires patience and a sense of humor.”

Yet an opportunity, as it is “the chance to tell a story that closely follows one of the most traumatic events of recent US military history. So I am telling as it happened but with some twists that make it even more ‘interesting.’ My characters start to have real conversations with each other—conversations I don’t have to create. They’re naturals.”

Stejskal also emphasizes “that a military-espionage thriller has to be told with a lot of blood and violence. And that one man or woman can’t do it all alone—it takes a team.”

His writing also focuses on “what ends a country will go to in order to get an advantage over its rivals. There just are not that many altruistic folks out there.”

He counsels “never (to) forget past history or it will come back to haunt you.”

“When I read them, I see the care they use to craft great novels that keep you entertained, engaged, and also wondering about the difference between truth and fiction.”

One of the thought-provoking themes upholding the core of his writing is: “Where does self-preservation—i.e. abandoning your mission—take precedence over duty?

“As long as there is a chance of accomplishing your task, your mission, you must continue on in the face of all the odds. That said, there are no extra points given for stupidity.”

From a novelist, wise words of far-reaching relevance are no surprise. The ability of this species to structure insight and imagination has repeatedly worked to the advantage of clandestine services, evoking illustrious names such as Daniel Defoe, Christopher Marlowe, and Somerset Maugham.

The inverse is equally true—clandestine operators have enriched the compendium of creative writing.

The synergy from both basks in Stejkal’s scholarly and imaginative works of ground reality that divert and educate.

James Stejskal is a military historian and author of The Snake Eater Chronicles, a Cold War military/espionage series.

To get inspiration for his writing, he spent 35 years as a soldier and intelligence officer, often working in far-off places with interesting people. APPOINTMENT IN TEHRAN, a Cold War spy thriller, is his second novel.

He is also the author of four non-fiction military history books, including Masters of Mayhem, a study of Lawrence of Arabia and the inception of modern British unconventional warfare, a Military History Matters Silver Medal winner.