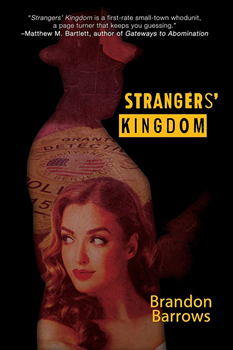 To stand out, a police procedural has to have emotional depth and a cop on the edge. If those are your measures, they don’t get much better than STRANGERS’ KINGDOM by Brandon Barrows.

The cop in this case is Detective Luke Campbell, whose past has left him politically blacklisted. His last chance for a career in law enforcement is to accept a job in the sleepy little town of Granton, Vermont. There he finds a beautiful woman, a vaguely sinister boss, and a possible chance at redemption. But he is barely settled in when a series of murders begins. And in a small town, murders affect everyone.

It’s an excellent setting for Luke Campbell. He tells himself he became a cop because there didn’t seem like anything better to do at the time, but he’s really an optimist and something of a romantic at heart.

“He really wants to help people,” Barrows says, “but he’d never in a million years think of himself as a hero, no matter what anyone else says. In some ways, he’s an exceptional person, but he sees himself as just an average guy doing a job. He’s definitely a hero to some people, though, whether he realizes it or not. He’s not falsely modest or anything. He’s genuinely humble, and I think most people would like him.”

Whether or not he deserves his sullied reputation depends on your perspective.

The setting of this novel is vital to the story, although Granton, Vermont doesn’t really exist. The locations are all fictional but based on real places in a real area of Vermont, not far from where the author lives.

“A big part of this novel is Luke being a fish out of water,” Barrows says. “He’s used to police work in a sizeable city, working in a thoroughly modern department. Now he’s in a very rural location, working in a department that’s operated the same way it has for decades under a chief who has very distinct ideas about how things should be run.”

Although the story is character-driven, STRANGERS’ KINGDOM is a tightly written police procedural, as well. Unlike some, it doesn’t get bogged down in details. When asked the secret to getting it right, Barrows says it’s simple: notes!

“I had to take notes while I was brainstorming, and more while I was writing, to make sure I kept everything straight in my own mind,” he says. “And I went through the manuscript with a fine-toothed comb multiple times after it was done just to make sure I didn’t contradict myself or forget or overlook anything. There are a lot of moving parts in a mystery, and this is no exception. It’s really the first thing I’ve ever written in which I had to keep excruciatingly detailed notes after I wrote a particular scene or chapter.”

Barrows has a lot of scenes under his belt. This may be his fourth novel, but he has more than 50 short stories published. The processes, he says, are quite different. For example, with a novel, you have a lot more room to let characters and situations breathe, or as he says, to let them find their own way.

“Sometimes in a short story, to make sure the reader has everything they need to know, you have to kind of frontload or info-dump,” Barrows says. “With a novel, if you do that, you’re going to lose people’s interest, so you need to spread that information out as much as possible, balancing what people need to know with what you want them to know. We all have favorite things about characters we’ve created that we want to share with readers, but you have to ask yourself, ‘Is this the right spot for this tidbit? Am I jumping ahead or do people need to know this by this point?’”

But when asked which is more fun to write, he couldn’t really say.

“I’ve written a ton of short stories this year,” Barrows says, “so I’d like to say writing another novel would be more fun at this point, only because it’d be a change of pace.”

I pressed Barrows for one scene in the book that was special to him. Naturally, he didn’t want to drop spoilers or give anything away, but he did tell me this:

“There’s a scene in which Luke has to confront someone in a way that he’s really not comfortable with because he knows it’s painful for that person. It wasn’t exactly hard for me to write, but it’s hard for me to read back because I can really relate to some of the things said and the reason behind that pain,” Barrows says. “I may not have quite realized it at the time I was writing the scene, but I managed to convey some pretty deep emotions of my own that hit hard on later realization.”

Luke Campbell is such a fascinating character, dropped into such a well-drawn environment, I was expecting this to be the start of a detective series. However, Barrows says he doesn’t know if he will write about Campbell again.

“Part of me thinks I’ve put him through enough and he deserves a break,” Barrows says. “Another part of me would really like to spend more time with him and the town of Granton, see how everyone is doing these days. It all depends on whether I ever think of a good, natural way to return to that world.”

Luckily, we get this chance to immerse ourselves in that world.

Brandon Barrows is the author of the novels Burn Me Out, This Rough Old World, and Nervosa, as well as over fifty published stories, selected of which are collected in the books The Altar in the Hills and The Castle-Town Tragedy. He is an active member of Private Eye Writers of America and International Thriller Writers. He lives by a big lake in Vermont with a patient wife and three demanding cats.