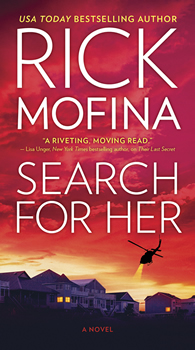 Author Rick Mofina taps into every parent’s worst fear in his latest thriller, SEARCH FOR HER.

At a truck stop near Las Vegas, 14-year-old Riley Jarrett vanishes from her family’s RV, turning their cross-country dream of starting over into a nightmare.

Investigators have their work cut out for them. The massive, bustling truck plaza in the desert is the perfect place for someone to disappear—or be taken. Detectives pursue every chilling lead as all eyes fall to the newly blended family with a tragic past. With the clock ticking down on the likelihood that Riley’s alive, suspicions run deep. Everyone—from Riley’s mom to her stepdad to her stepbrother and her ex-boyfriend—has something to hide. And their secrets could prove deadly.

The Big Thrill recently reached out to bestselling author Rick Mofina to learn more about this chilling new tale.

All of them really. I was inspired to write this story by true cases of families separated at large truck stops, fairs, and malls. Most of them, fortunately, had happy endings.

I decided to set the book in California and Nevada because the locale would be perfect for this story, and I had the opportunity to fly there, research the story, and set up interviews with real law enforcement with the aim of making the book as real as possible.

Tell us about Riley Jarrett and her family. What is life like for them leading up the events of your story?

The history for the family is a tragic one. Grace Jarrett, a nurse in San Diego, lost her first husband, Riley’s dad, in a car accident. After several painful years, Grace met and married John Marshall, who had lost his first wife and teenage daughter in a sailing accident in San Diego Bay. John’s son, Blake, is also a teenager, a few years older than Riley. Both families were from San Diego, California, where Grace worked at the University of California, San Diego Medical Center. John worked as public relations manager at the clothing chain in San Diego, where things had not been going well for him. So he accepted a new job as communications director with a Fortune 500 retail company in Pittsburgh. Riley had deep roots and a boyfriend in San Diego and opposed moving from San Diego where her dad died. However, her mother, Grace, despite uncertainties, agreed that they should move and create a new chapter in their new lives as a blended family. Having only been married a short time, Grace and John thought that a family vacation drive in an RV across the country would be a good way to create new memories. But from the get-go, their dream of a new life melts into a nightmare.

Did writing about a teenage character in peril present any unique challenges? If so, can you briefly discuss them?

I started by going to the library for every psychological help and text book I could find about the challenges of being a teen in a blended family and for parents raising them, especially after the death of a spouse. Many books were quite good, presenting examples and case studies, aspects that I would never consider. Then I went further, reading the biographies and memoirs of people who’ve survived being in peril as teens, overcoming the loss of a parent, or surviving abduction and abuse. These heart-wrenching accounts helped me find the mindset of a teenage character in peril and build a foundation upon which I could keep my characters as real and authentic as possible.

You mentioned that you were inspired by some true cases of separated families. How did you come across these cases and did you learn anything new in your research?

As a crime reporter, I covered cases of families in crisis, families enduring tragedies of every sort. Like most reporters around the world who’ve reported these kinds of stories, you see, hear, and feel things you’ll never forget, things you carry with you. So I drew upon those cases for the raw emotions. One time, a killer called me in the newsroom after he was arrested to detail how he murdered a teenage girl. In another case we tracked down a man who was guilty of murdering a young woman and almost got away with it. Another time we received a letter from a psychic who claimed to point us in the direction of a killer. Then there are the high-profile cases known around the world. I researched those more so for a procedural understanding of the overwhelming work that goes into investigations, search operations, the number of people involved. In one case, long after it was resolved, investigators posted the mountain of tips that were called in and investigated. It was exhaustive and enlightening.

The answer to both is on-the-scene research. In this story, Riley Jarrett disappears at a busy truck stop near Las Vegas during her family’s cross-country move. And the investigation uncovers a web of lies, secrets, and fears her case is linked to the unsolved murder of another girl.

To research SEARCH FOR HER, I traveled to California and Nevada and drove the same route on the same interstate as the family in the book. I drove from San Diego to Las Vegas. I interviewed a number of officials, including police in San Diego, Las Vegas, and the FBI. I also stopped at truck stops and walked in the desert all to keep the story as realistic as possible.

Something must be at stake—and for the reader, all is not what it seems. The stakes fuel the story. Of equal importance, the story must be about believable, sympathetic characters the reader cares about, people the reader will love or hate. People who are facing mounting challenges at every turn that not only define them but will ultimately redefine them.

Rick Mofina is a former journalist who has interviewed murderers on death row, flown over Los Angeles with the LAPD, and patrolled with the Royal Canadian Mounted Police near the Arctic. He’s also reported from Algeria, Morocco, Nigeria, Ethiopia, South Africa, Senegal, Egypt, the Caribbean, and Kuwait’s border with Iraq. His true-crime freelance work has appeared in The New York Times, The Telegraph (London, UK), Reader’s Digest, Penthouse, Marie Claire, The Moscow Times, and The South China Morning Post, (Hong Kong). He has written more than 20 crime fiction thrillers that have been published in nearly 30 countries, including an illegal translation produced in Iran.

As a two-time winner of the Crime Writers of Canada’s Excellence Award, the Barry Award, a four-time Thriller Award finalist, and a two-time Shamus Award finalist, the Library Journal calls him “One of the best thriller writers in the business.”