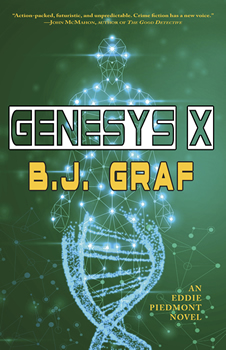 The opening strains of B.J. Graf’s debut novel GENESYS X will be familiar to any fan of hardboiled crime stories: a pair of wisecracking LA detectives arrive at what might or might not be a crime scene, where an exotic dancer lies dead of an apparent overdose. But it quickly becomes clear that Eddie Piedmont and Shin Miyaguchi are moving through a world that would be alien to the Spades and Marlowes of classic noir fiction. They wear gloves with built-in phones and hologram projectors, every police car (and even the full moon) sports a digital sponsor logo, and a crime-scene tech searches for clues by scanning the room’s microbial cloud.

Welcome to Graf’s vision of the near future, when 2041 could give 2020 a run for its money. A new strain of Alzheimer’s that affects only teens is decimating the youth population, exacerbating the gang wars and drug scourge that have already ravaged Eddie and Shin’s city. As he investigates the dancer’s death, Eddie is drawn into the liminal space where the past repeatedly collides with the future, often with devastating results.

Sci-fi noir stretches back to at least the early 1950s, when Alfred Bester’s The Demolished Man helped lay the groundwork for everything from Philip K. Dick’s Do Androids Dream of Electric Sheep? to Jonathan Lethem’s Gun, with Occasional Music. But Graf, who teaches both film studies and classical mythology at several California universities, puts a fresh shine on the well-worn genre by infusing her series launch with elements of Greek tragedy and myth. The references are both subtle and overt; Eddie’s efforts to outrun his family’s grim history only drive him closer to calamity, despite the warnings of a franchised holographic psychic named Cassandra.

In her first interview with The Big Thrill, Graf—a former Hollywood development executive who served as a producer on Primal Fear, Fallen, and the criminally underappreciated sci-fi murder mystery Frequency—talks about finding inspiration in Greek tragedy, developing her characters in a series of short stories before tackling a novel, and writing about a pandemic just before living through one.

In the acknowledgments, you mention the book was inspired by a lecture on Sophocles. Can you elaborate?

Sure thing. When I was in graduate school, working on my doctorate in classics, I was a T.A. for a Greek literature class. Prof. Nugent gave the best lecture on Oedipus and the Theban saga I’ve ever heard. It stuck with me over the years, especially now that I teach classical mythology myself. Certain aspects of identity and the fate vs. free will theme in the Oedipus myth which fascinate contemporary people also got me thinking. The ancient Greeks don’t really have a concept of free will. A lot of contemporary scientific work on neurology also brings the very notion of free will into question. Over the years I thought it would be interesting to embed aspects of Greek mythology into a noirish police procedural with a homicide detective who is a firm believer in free will. Voila: GENESYS X.

GENESYS X deals with a pandemic that devastates the youth population rather than the elderly, and the race to develop a cure. Did recent events shape the narrative, or was the book completed before the pandemic struck?

The book was written long before our current pandemic, but I added in a few things as we headed into the COVID calamity during the edits. I’ve been looking at different plagues and how they devastated societies like fifth-century Athens, and that got me thinking about the intersection of past and future. Technology changes over time, but human nature is much more constant. Pandemics tend to reoccur, and I think we contemporary people got a little complacent because of the science we have available.

Did the pandemic alter your book release plan?

A bit. I’m so glad I found my wonderful agent Sandy Lu and publisher Patrick Swenson of Fairwood Press before the pandemic struck. I know the publishing industry has been hard hit. It’s a bad time for a debut, but I’m so fortunate to be able to get the book out at all. We had our publishing date set, and we didn’t change that.

On the positive side, I got a lot of writing done this year since I didn’t have to commute to campus. However, the lockdown certainly eviscerated all plans for conferences and book signings. You know how it goes: mankind plans; God laughs.

You’ve written several short stories featuring Eddie Piedmont, the main character of GENESYS X. How did those stories help you develop the characters and world of your debut novel?

I set GENESYS X in the near future and found myself thinking not only about how technology might change by the time we get to 2041, but how even the notion of crime changes over time. The short stories gave me the chance to delve into some of these areas.

And they let me fill in some of Eddie’s and other characters’ back stories in ways that wouldn’t fit in the book. Why do we like what we like? I wondered why Eddie drives the car he drives, for example, and how he could afford it. “Sandman” let me explore that as well as some future tech that redefines the issue of identity theft.

“Deus ex Machina” was simultaneously a riff on Euripides’s Medea and a chance to delve into the beginning of Eddie’s relationship with [his fiancée] Jo.

“Blood Shadows” lets us see Eddie’s old partner Frank well before he teams up with Eddie while getting into the genetic material that allowed us to catch the Golden State Killer.

And the first short I wrote, “Shikata ga Nai,” features both Eddie and Shin on a case that involves self-driving cars, but I’m working on a story that would put Shin front and center too.

Tell me about the inspiration behind an Alzheimer’s strain that only affects the young.

When I was writing the book, I knew I needed a pandemic to rage through the world of the story. I thought about what kind of pandemic would really terrify me. My mother and two of my aunts had Alzheimer’s, and I nursed my mom through her death. It’s such a horrific disease, one that destroys a person’s identity bit by bit. If a virulent new form of Alzheimer’s suddenly appeared in young people, that would certainly scare me to death. Preying on the young inverts the natural order. And my detective is young too, though not as young as the teens getting the disease in GENESYS X.

You teach film studies at several universities, and before that you were a development executive for Abilene Pictures. What pushed you toward novels rather than screenplays?

I needed to tell the story from Eddie’s POV, and while my film work helped make the book very visual, a novel allowed me to get inside the head of a character in a way that film doesn’t. That was a fun challenge. Plus, a lot of film and TV is based on novels, short stories, or articles, so I don’t rule that out if there should be some interest. I’ve thought about writing a pilot script and treatment for a limited series, but for the time being I’m staying with books like GENESYS X.

Wise man, Dennis Lehane. Both apply to Eddie. Like many cops who see people at their worst day in and day out, Eddie finds solace in the bottle on the bad days. That, plus his very healthy ego tends to result in the predictable destructive and self-destructive behavior we see in noir. But I had Eddie start the book as the youngest highflyer in Homicide Special who’s just about to get married to the love of his life. So while he’s not a king in a Greek tragedy, Eddie’s up there in his own way. Let’s just say I feel tremendous guilt for putting the poor guy through the wringer in GENESYS X.

Many of our great noir stories, from The Killing to Chinatown, have been compared to Greek tragedy. Is noir our modern version of that earlier form?

I’d have to say yes on that. Chinatown, for example, is a terrific riff on the Oedipus story with its seeing and blindness motif and the incest, of course. In modern stories we have our elites, but not the reverence for them that allows for that fall from the heights.

Can you tell us anything about Eddie’s next case?

A little bit. I’m planning to stay with the intersection of Greek myth and near future sci-fi. The next book is tentatively titled The Dark Gift, and it’s a riff on the Orpheus myth with virtual reality and a serial killer.

B.J. Graf (aka Beverly Graf) lives in Los Angeles with her family and a menagerie of four-footers. Her near-future-mystery-novel, GENESYS X, featuring Detectives Piedmont & Miyaguchi, will be published 11/10/2020 by Fairwood Press. She also has four short stories already published including “Deus ex Machina,” which follows in the wake of “Sandman,” “Blood Shadows,” and “Shikata Ga Nai.” In her alternate identity, Dr. Graf is an adjunct professor who teaches film studies and classical mythology at Pepperdine, UCLA, and CSUN. Previously, she worked as V.P. of development for Abilene Pictures where they produced several features and television projects, including Primal Fear, Frequency, Fallen, Fracture, and NYPD 2069.