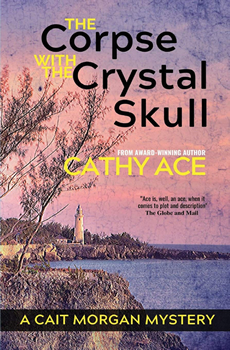 Author Cathy Ace says she loves crime and that certainly comes out in her prolific writing.

For this interview with The Big Thrill, I started by asking her about the various series she has written and the old chestnut—does she have a favourite?

That’s a bit like asking a parent to name their favourite child! So, no, I don’t, although a​​​​​​t the moment I’m focused on The Cait Morgan Mysteries. My first novel was a Cait Morgan book, and the book I wrote this year is also one. She’s been “recuperating” from a rather traumatic event at the end of her eighth adventure, which was published in 2016. I was keen to bring her back, because she means so much to me…and, I’m pleased to say, to readers too. When I created Cait I knew I wanted to make a character with many aspects of my own background and upbringing. There aren’t a lot of Welsh working class female voices in crime fiction, and I wanted hers to be heard. I also wanted to take the chance to write about a woman who’s worked through some difficult personal and professional challenges, and has found a way to thrive, and be useful. Yes, they’re traditional mysteries which appear “light,” but there are themes I wanted to develop throughout the series which allow Cait to have several layers she might not be good at identifying in herself, but which inform her actions and reactions.

The WISE Enquiries Agency has such a neat twist in terms of the personnel. What inspired it and how do you make sure it doesn’t get cliched?

With a Welsh woman who became an immigrant to Canada—like me—leading my Cait Morgan books, I decided I’d “return to my Homeland” for the WISE Enquiries Agency books. I also wanted to examine the way in which women can successfully work as a team, without jealousy or petty bickering getting in the way. The idea to have one Welsh, one Irish, one Scottish, and one English woman featured, hence WISE, allows me to examine the natural and inevitable companionship and rivalry every Brit knows exists between the original Four Home Nations of the annual rugby union challenge.

But I also chose quite specific class and cultural backgrounds for each of the women too, because the challenges of blending as a team when you’re from a different part of the UK, or from a different class, are real. However, they provide even more ways in which I can examine how women are able to overcome all these potential opportunities to focus on their differences and really pull together in one cohesive effort, on behalf of their clients.

The Cait Morgan Mysteries are written in the first person—a decision I made to upend the expectation that usually it’s a hard-boiled PI whose voice we hear this way, rather than a sleuth.

I have done my best to make my characters relatable, which—I hope—will allow them to “live and breathe and develop” as far as is possible. Since characters are at the heart of these books I trust that will allow them to continue without staleness. There are always many stories it’s worth telling about women…female voices need as many outlets as possible.

Your book, The Wrong Boy, is inspired by Rhossili on the Gower Peninsular, which you describe as one of the most beautiful places on earth. How important is location and sense of place in your writing?

Rhossili inspired the book’s location, specific geographic being, and its overall mood, but I have invented bits of Rhosddraig, the village in the book, that don’t exist in the original, and have certainly populated my fictional village with the sort of people anyone would dread meeting in real life. Rhossili is a place I visited with my family from before I could walk until…well, whenever I manage to get back to Wales again.

My last visit was in pre-pandemic days; thank goodness there are so many photos of it online that I can “visit” whenever I want!

Location is critical to each of my books. The Cait Morgan Mysteries are each set in a different country, where I have lived, worked, or have visited over decades, and the plot for each book could really only works in that specific locale.

Freddie Burkinshaw and his private estate in THE CORPSE WITH THE CRYSTAL SKULL—inspired by a real person and place?

I visited a private estate in Jamaica, and no, it didn’t have a tower purportedly built by Henry Morgan. I couldn’t afford to stay there. That inspired my description of the Captain’s Lookout estate. Freddie Burkinshaw was inspired by a few people I have met in real life, but I daren’t say who they were.

Food and drink feature heavily in THE CORPSE WITH THE CRYSTAL SKULL. Do you think authors can give subtle clues about their characters via the things they consume?

Cait’s a gourmand rather than a gourmet, and is an adventurous and enthusiastic eater! One of the reasons that food and drink feature so heavily in the Cait Morgan Mysteries is because she and I believe a culture represents itself well through its food, and Cait’s happy to try local specialties as she travels. Bud has a more conservative palate. Do consumption patterns and methods speak to character? Yes, I believe they do as part of a person’s psychological makeup, and often provide an indicator of their sociological background and standing. I use it as such in the books, though I try to do it in subtle ways—but those are not lost on Cait’s keen understanding of psychology and sociology.

THE CORPSE WITH THE CRYSTAL SKULL features chapter titles  like “Discovering Deceit” and “Of Love and Lies.” Where did they all come from?

Cathy Ace’s Welsh Canadian criminal psychologist sleuth Cait Morgan has encountered traditional, closed-circle puzzle plot whodunits in eight previous books, while her four WISE Enquiries Agency Mysteries feature a quartet of softly-boiled female PIs who solve quintessentially British cases from their stately home-based office in rural Wales. Her novel of psychological suspense, The Wrong Boy, was set in Wales, and became a #1 Amazon bestseller and an IPPY medal winner. Shortlisted for the Bony Blithe Award three times in four years, winning in 2015, she’s also been shortlisted for an Arthur Ellis Award for Best Short Story. Cathy was born and raised in Wales, though she now lives in Canada.