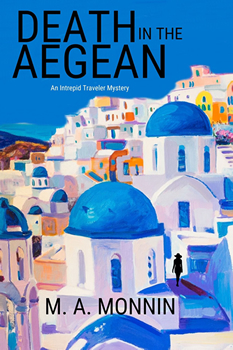 When former archaeology student Stefanie Adams travels to Greece, the last thing she expects is to be suspected of murdering the wealthy bride who accused her deceased father of artifact theft. It doesn’t help that Stefanie is also now tied to the robbery of the newly discovered Akrotiri Snake Goddess.

Greek police have two high-profile crimes to solve—and unfortunately for Stefanie, she’s linked to them both. To prove her innocence, Stefanie will need to navigate a web of international intrigue and identify the real killer and thief—before she becomes the next victim.

In this interview with The Big Thrill, author M.A. Monnin gives us the scoop about DEATH IN THE AEGEAN—a novel bestselling author Gayle Lynds calls “a mystery of epic proportions.”

One of the pleasures of conducting interviews is that you start by talking about writing crime and end up somewhere totally different but equally fascinating. How could we discuss DEATH IN THE AEGEAN without talking about Atlantis? Let’s start with the highs and lows of writing a story set in foreign climes.

The biggest challenge is the cost to go there in person, so that I can experience the sights, smells, and sounds myself. I love to travel and have set DEATH IN THE AEGEAN in Santorini and Crete, places I’ve actually visited. That’s true of the future books in the series as well. Without being able to visit, it’s hard to get the locals’ viewpoint right, such as the attitude toward taxes that I show in the book. The easiest to get right is locations, whether they are tourist spots or restaurants. The Internet has so much to offer. You find the official view from Google Maps, official photos, menus, entrance prices, and that sort of thing, but then you can also see the real experience: Sky cam live views of an area, customer photos of food and seating areas, reviews, newspaper reports, dedicated Facebook groups—like one of my favorites, which focuses on tourist travel to Greece. Whether I use a real restaurant or not, the Internet gives me everything I need to make my fictional restaurant feel real.

You can tell that with the strong sense of place in the book. How does an author do that without swamping the reader with a travelogue that gets in the way of the plot? 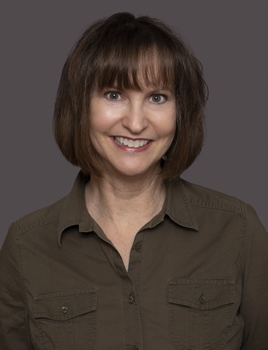 I think the best way to convey setting is to intersperse little details with the action and dialogue, adding bits and pieces of the sights, sounds, and smells of the place as your characters experience whatever conflict they’re going through. That way, the reader gets a sense of the scene as a whole, rather than seeing the action and the setting as two different topics.

When I write, I do tend to come up with the setting first, and think, Ooo, I’d love to set a mystery here, or This is the perfect place for a murder. And then I fit the crime into the setting with the type of people that might be there and why. For example, when my husband and I went to Santorini, we made a point to visit Akrotiri, the excavated Bronze Age city. I was really surprised to learn that only one gold item has been found there (to date!), a gold statue of an ibex. On nearby Crete, another center of the Minoan culture, two ceramic snake goddesses have been found. So when I was in Akrotiri, I thought, What if as they excavate, they find a fabulous gold snake goddess here? What kind of people would come see it? How would they interact? Human nature being what it is, someone would surely covet it.

There’s a strong tradition of links between archaeology and crime writing—how do you intertwine the two?

Archaeology is a hobby for me rather than a profession. I joined the Kansas City Archaeological Society to see their programs, and a bonus has been to participate in local digs. Basically, I know enough to be able to follow a professional’s direction. In digs around the Kansas City area, I’ve found burnt chert from a native American hearth, found broken bricks and glass from a collapsed wall of an early church, and have documented Civil War bullet holes on the exterior of a house. My favorite finds are the pieces of a teal blue square glass bottle at the site of a former doctor’s office. We estimate that it was probably from the 1930s. I’ve looked online for a similar bottle but haven’t found it yet.

Thinking like an archaeologist definitely helps when writing crime. You have to be a critical thinker for both, because the smallest clue can lead you to either the bigger picture or a false conclusion. There is an activity KCAS takes to elementary school STEM nights and local festivals, in which kids sort out artifacts that would be found at a site where people once lived. In having the kids look at the remnants of food (peach pits, corn cob) we first ask them what the people ate. They usually answer with the direct proof: peaches and corn. Then we ask if they think that was all people ate. They usually come up with bread, chicken, maybe apples. So we have them think about why we aren’t seeing evidence of those items. Their big take-away is that we can learn some things about these people, but we are always aware that there are things about them that we can’t see. As a mystery writer, I always keep in mind those things my characters can’t see. Yet.

When not traveling, where do you go to recharge the batteries?

My garden, which is a place of refuge, for refreshment, and for thinking. Gardening satisfies another creative urge for me. My favorite part is planning the hardscape, laying out brick paths and patterned gardens that will bring a sense of order to what otherwise could be a chaotic jumble of plants. Needless to say, I’m a plotter rather than a pantser when it comes to writing. I like to have that outline finished before I start writing. The garden is well-established now, so there’s less planning, but I’m out in it every day. There’s something about being surrounded by Japanese maples, boxwood, and flowers that soothes my soul and grounds me. And weeding is a perfect mindless task that allows me to work out plots and plot holes.

You produce both novel-length and short stories. We’ve touched on some key writing skills, so where do they differ between the two genres?

To write a novel, a writer needs to be able to keep track of a lot of different threads and then weave them together at the end. I’ve tried a few organizational methods, and I’ve found that colored index cards and a poster-size pad of paper on an easel help me keep track of the big picture. For short stories, a writer needs to be able to capture a character in just a few words and pare down a story to its bare essentials. I try to do this by focusing on what emotion I want the reader to feel when they read the short story. My tip for those that want to write short fiction: Nail the ending. Make it pithy, sharp, or stark, according to your story. Then leave it alone. Don’t overexplain. The reader will get it.

And so to one of the great unsolved mysteries. Atlantis: inside or outside the Mediterranean? Discuss.

Oh, you went there! In general, Thera (Santorini) is the widely accepted inspiration for Plato’s lesson on good governance. Archaeology has shown that Thera, before the massive eruption that destroyed it, was home to the Minoans, a culture that had achieved a high degree of sophistication in their civil engineering (indoor plumbing leading to sewers buried beneath the streets), a high degree of artistry (look at their gold work and frescos) and successfully traded across the Mediterranean. Other peoples and cultures from that time frame knew of them, for example, the Egyptians.

Radiocarbon dating of an olive branch dates the massive eruption on Thera to roughly 1628-1600 BCE, and frost damage on trees as far away as California and Ireland from the same time period indicate that the ash from that volcano affected weather patterns, showing that the eruption was so massive that it impacted people far beyond Thera itself. (There is debate over this time frame and 100 or so years later, about 1540 BCE. I’m going with 1628ish BCE.) That event would have been told and retold over the centuries, and Plato’s students would have been familiar with the general idea, so that made the story, embellished with details, a good parable to illustrate the benefits of ruling wisely. One textbook points out that none of Plato’s contemporaries addressed his tale of ‘Atlantis,’ because they all knew it was exactly that: a literary device to illustrate a lesson.

I’ll end with a fun fact that I learned while at Akrotiri: No human remains have been found in the city. The volcano must have given enough advance notice that the inhabitants sailed away on their fleet.

M.A. Monnin’s short stories have appeared in Malice Domestic and pulp anthologies as well as Black Cat Mystery Magazine. Her non-fiction endeavors include articles on Victorian detective fiction, Victorian reception of Ancient Egypt, and gardening. An avocational archaeologist and USAF veteran, Mary has lived in Germany, The Netherlands, Spain, and England as Army brat, airman, and Air Force wife, and attributes her love of travel and fascination with archaeology to her childhood in West Germany, where she spent weekends and school field trips visiting medieval churches, castles, and villages.

A board member of MWA Midwest Chapter, M.A. is also a member of ITW, SinC, SMFS, RWA, and is a trustee of the Kansas City Archaeological Society. When she isn’t writing, she divides her time between traveling and hiking. She lives in Kansas City, Missouri with her husband, Bob, and two Siberian huskies.