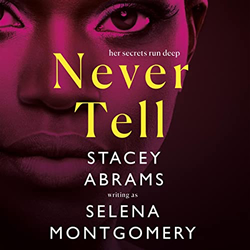 Who doesn’t love to listen to mysteries on audio? A good narrator will keep you from skipping to the end to find out who committed the crime. Try these six new romance audiobooks with a dollop of mystery.

Political figure Stacey Abrams is also a published romance author writing under the pseudonym Selena Montgomery. Her previously-published title NEVER TELL gets an audio update with narrator January LaVoy and a note read by Abrams herself. Listeners will have trouble deciding which is hotter—tracking down a serial killer in steamy New Orleans or the passion building between a criminal psychologist and an investigative journalist working the case.

Romance sometimes takes a leisurely pace, but not in LIGHTNING IN A MIRROR by Jayne Ann Krentz and read by Sandra Michelle. The narrator picks up Krentz’s opening gambit—the main character encounters a serial killer—and runs from there as two psychics work together to understand and escape the situation they find themselves in. Michelle explores the quirky personalities that are the hallmark of Krentz’s romantic suspense.

The title says it all in Heather Graham’s THE UNKNOWN, read by Roger Wayne. FBI agent Ryder Stapleton needs to untangle one last case before he can step down, and he finds himself with an unlikely, and appealing, partner in museum curator Sienna Murray. With Wayne, it’s all about the pacing as his intense reading keeps up with the nonstop action. 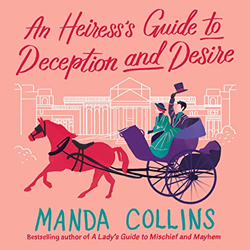 Narrator Mary Jane Wells delights listeners with AN HEIRESS’S GUIDE TO DECEPTION AND DESIRE by Manda Collins. She matches the indomitable spirit of our hero Caroline, whose 19th-century sensibilities won’t stop her from tracking down her kidnapped friend. Add in a former fiancé, and the game is afoot. Wells is an excellent choice for those who like their mysteries on the lively side.

Narrators Teddy Hamilton and Maxine Mitchell present author Kennedy L. Mitchell’s series opener MINE TO PROTECT, book one in the Protection Series. A wary park ranger has to decide to trust a former Marine when trouble yet again enters her life. As the only mystery on the list with a dual narration, listeners will have two ways to connect to the action and the romance!

Cornell Collins returns to narrate the latest KJ Charles historical romance, SUBTLE BLOOD. Will and Kim, two men scarred by their wartime service and struggling to build a life together, are dragged into their past with a murder investigation. Collins provides both vibrant secondary character voices and insight into the main characters’ psychology.

AudioFile’s mystery audiobooks for June include a riveting alternative history, dark domestic thrillers, and masterful performances from each of the narrators. Explore the full list below to learn more about Sarah Pinborough’s atmospheric story with shocking twists, Adjoa Andoh’s talented narration of a tense story about women who have disappeared, and more compelling mystery listening. 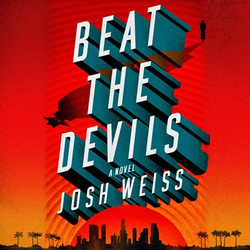 This audiobook is much more than a thriller. Set in an alternative history with red-scare flag bearer Joseph McCarthy as President, it blends fictional and real characters. As LAPD detective Morris Baker investigates two deaths, he becomes immersed in a cover-up that puts him in danger. Fred Berman handles the complex story beautifully and performs a range of accents without missing a beat. The Czechoslovakian-born Baker has an Eastern European intonation that never wavers. Federal agents grunt their way through their investigations. Berman also illuminates the theme of Baker’s Jewish identity. Berman’s narration perfectly renders the tone of this riveting—and scary—story. 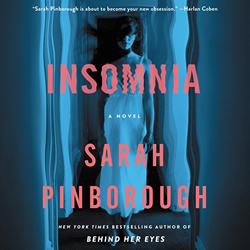 Sarah Durham narrates Pinborough’s dark domestic thriller that features an intense narrator and a cast of complex and multifaceted characters rife with family secrets, paranoia, and loss of sleep. The atmospheric story builds slowly, then speeds up in the days before Emma Averell’s 40th birthday, leaving listeners feeling that something darker is in play. Durham’s exceptional narration gives listeners chills as she smoothly switches characters, evoking a sense of unease and uncertainty about the realities being presented. A compelling audiobook that will leave listeners sated at the final twist. 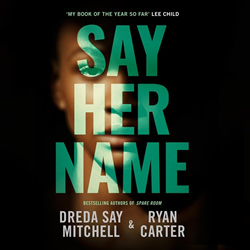 Narrator Adjoa Andoh showcases her acting talents as she portrays Eva, a woman in desperate search of her birth mother. Andoh expresses the tension and pain felt by the women she voices with appropriate pacing and intense emotion. Some of the most heartbreaking moments come in Andoh’s masterful performance of Eva’s childhood experiences in an orphanage. The title has many layers of meaning: Eva says the names of strong, historic Black females to boost her confidence, and she repeatedly says the names of the four Black women who mysteriously disappeared in 1994 in London without any public outcry. A disturbing, slow-burn psychological thriller that keeps listeners engaged to the end. 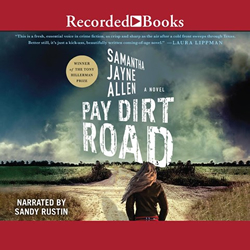 Narrator Sandy Rustin performs Allen’s debut with passion and aplomb. Her youthful tone and energetic delivery guide listeners down PAY DIRT ROAD with palpable anxiety. Rustin empathizes with recent college graduate and former waitress Annie McIntyre, who is seeking her purpose in life. She attends a party with former friends and co-workers at which someone murders a waitress. Annie knows the man arrested is innocent, so she stumbles into her family’s PI business with her grandfather, a former sheriff. Rustin picks up the pace as Annie works to uncover the truth. 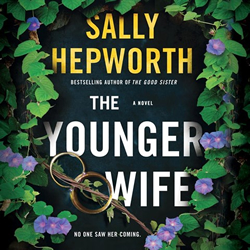 Four troubled women are given outstanding portrayals in this audiobook. After he divorces his first wife, who has dementia, Dr. Stephen Aston’s impending wedding to the much younger Heather is upended by a shocking series of events. Narrator Barrie Kreinik highlights the bride-to-be’s alcoholic confusion and unwillingness to accept Stephen’s glib explanations for her bruises. Zoe Carides is soft-spoken and convincing as Stephen’s daughter, while Caroline Lee, portraying kleptomaniac daughter Tully, sounds sharp-edged with mounting hysteria. And Jessica Douglas-Henry maintains a cool distance as first wife Fiona vaguely remembers that Stephen “hurt” her. Are the women all accident-prone—or do their bruises reflect something more sinister?