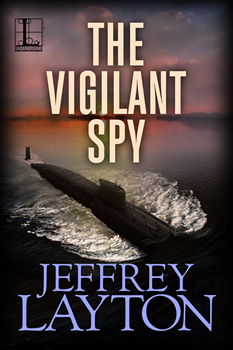 In author Jeffrey Layton’s THE VIGILANT SPY (book four in the Yuri Kirov series), former Russian naval intelligence officer Yuri Kirov just wants to live quietly with his American family. But the CIA drafts him for an impossibly dangerous mission—to use his expertise in underwater technology to assist American spies in uncovering the secrets behind China’s new antisubmarine weapon system, codename SERPENT.

Over the years, interviews with authors who are or were law enforcement officers, intelligence officers and analysts, and enlisted personnel from nearly every branch of the military have revealed they often “write what they know.” As an engineer, Layton’s experience also informs his military thriller series—but Layton is no ordinary engineer.

The Big Thrill caught up with Layton to talk about research, character development, and how his experiences helped him write THE VIGILANT SPY.

How has your experience as a coastal engineer informed your novels?

Engineers are required to pay attention to details due to the nature of their education and training. However, authors writing in this genre must be careful not to overload the reader with too much technical information or jargon. It’s a delicate balance because many book lovers do enjoy the details—those readers are my audience.

In Yuri Kirov, you created a protagonist for whom you had to learn a new culture, traditions, and language. How did you work through that in the early novels, and how do you stay true to that today?

One of my goals was to tell the story through the eyes of an adversary of the United States—Russian naval officer Captain-Lieutenant Yuri Kirov. Throughout the series, I used American vernaculars that baffled Yuri to remind the reader that English is not his first language.

Yuri evolves through the series from a dedicated military spy responsible for conducting espionage operations against the US to an undocumented immigrant who is hiding in plain sight in a Seattle suburb. Yuri’s metamorphosis resulted from his disillusion with the Russian government and his love for an American woman.

Tom Clancy is one of your influences. How has he impacted your writing?

Tom Clancy perfected the military thriller with his Jack Ryan series. Using Clancy as an example, I developed my own style for the Yuri Kirov series. Instead of focusing on “big picture” warfare and political issues, my protagonist’s world is simply one of survival. Yuri Kirov’s battles are personal and generally low intensity compared to the predicaments facing Jack Ryan. Nevertheless, the stakes for Yuri are just as high as those for Ryan.

Tell us about Yuri Kirov. What do you like about him? What keeps him human? What surprised you as he further develops across your novel series?

Yuri Kirov is a Russian military spy, but he is grounded in faith and morality thanks to his mother and his maternal grandfather. He is a strong leader who is loyal to the men he serves with. Yuri is conflicted in THE VIGILANT SPY as he shifts alliance, not wanting to betray his homeland but at the same time ashamed at the ruthlessness of the Russian government. When manipulated by his new master to participate in a spy mission in China, Yuri doubts he will see his family again.

Is there a scene or chapter in THE VIGILANT SPY that is a favorite or that is especially meaningful to you?

My favorite scene is when the president of China is beach-walking with his golden retriever, Blossom. He has just concluded a meeting with China’s senior military officer at the president’s palatial estate located on the shore of the Bohai Sea. With the exception of a security team, President Chen Shen and Blossom are alone. While Blossom frolics in the water, chasing driftwood tossed by Chen, China’s leader is deep in thought. He needs to make a critical decision. As President Chen continues his walk, he ponders China’s Century of Humiliation.

I used this scene to illustrate China’s take on its relations with the West, the United States in particular. In the scene, President Chen follows in the footsteps of his predecessors.

Is there a bigger, deeper theme in THE VIGILANT SPY?

The governments of Russia and China are not friends of the United States. Russia is a declining world power but, because of its vast nuclear arsenal, remains a lethal threat to America. China is a rising power and, in my opinion, a much greater hazard to the United States than the Russian Federation.

Early in my professional career, I worked as a diver-engineer. I conducted numerous underwater inspections of pipelines, piers, breakwaters, and various other marine structures. I was also involved in underwater geotechnical testing of bottom sediments and water quality monitoring of marine and fresh waters. It was hard work, and at times somewhat dangerous, but still a lot of fun.

What’s one piece of advice that has served you well that you can give aspiring authors today?

When writing the first draft, set a goal of a minimum of 500 new words each day. With that goal in mind, try to write every day of the week. If you follow that advice, you will complete a 100,000 word manuscript in about six months.

I followed this practice for THE VIGILANT SPY, producing the first draft in just under six months. For me, the first draft is always the hardest element of writing a novel. It took me another half-year of self-editing countless revised drafts before I was ready to send the completed manuscript to my publisher.

Jeffrey Layton is the author of the Yuri Kirov thrillers—THE VIGILANT SPY, The Faithful Spy, The Forever Spy, and The Good Spy. His other published thrillers include Vortex One, Warhead, and Blowout. Jeff is a professional engineer who specializes in coastal engineering. He is a member of the Authors Guild and the Pacific Northwest Writers Association. Jeff uses his knowledge of diving, yachting, offshore engineering, and underwater warfare in the novels he writes. He lives in the Pacific Northwest.