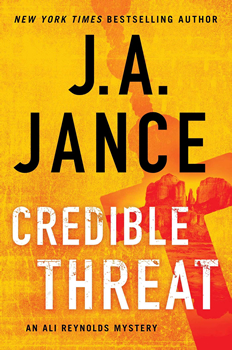 In her latest novel, CREDIBLE THREAT, J. A. Jance tackles one of the thorniest issues imaginable: the sex abuse crisis that has engulfed the Catholic Church in recent decades.

The 15th Ali Reynolds thriller finds the newscaster-turned-investigator called to the aid of Archbishop Francis Gillespie, who has been targeted for assassination by an unconventional killer. Seventy-year-old Rachel Higgins, whose son died of a drug overdose after being abused by a pedophile priest in the archbishop’s diocese years ago, doesn’t realize that Francis helped bring several abusive priests to justice, nor would she care—she simply wants to make someone pay for the death of her only child. Since the priest who actually committed the abuse is already dead, Rachel trains her sights on the archbishop.

Initially, Francis is more concerned with saving his would-be killer’s soul than preserving his own life. But when Rachel’s first assassination attempt goes tragically wrong, Ali and the High Noon security crew—including Frigg, a deviant artificial intelligence the team has spent several books attempting to rehabilitate—set out to find Rachel and stop her from claiming another innocent life.

Jance, who has spent the last several weeks in relative isolation with her husband in their Seattle home, answered a few questions for The Big Thrill about weathering a pandemic, the appeal of writing a series installment versus a standalone, and how her editor came to the rescue of her most unconventional character so far.

First and most importantly, how are you doing, and how have you been filling the hours during quarantine?

The last vestige of my February manicure came off in the shower this morning. I had planned on another just before the Tucson Festival of Books in March, but the Festival was canceled, as were all future manicures. In the meantime, due to a combination of age and underlying health issues, my husband and I have stayed very close to home. We’ve had some socially distanced interactions with our kids and grandkids. Yesterday, I went bowling with my grandson. No, bowling alleys aren’t open yet in Seattle, Washington, but Colt is a championship bowler, and he has missed it terribly. His coach came up with a battered set of old pins. We took them to the schoolyard and set them up on a stretch of uphill sidewalk. He bowled. I was the ball return and pin setter—make that “pin monkey.” It was fun, and he got in some much needed practice.

CREDIBLE THREAT centers on a particularly upsetting real-world issue: the question of the Catholic Church’s complicity in the abuse of countless children and young adults. What inspired you to tackle that topic?

As someone who was a victim of abuse as a child, this issue is often at the forefront of my stories. There’s an ongoing case in my hometown right now where clergy members and other elders in a different denomination swept a child’s pleas for help under the rug. So the stand-up people in this world—people like my own father, in my case—are my heroes. Enter Archbishop Gillespie, because it turns out he’s a stand-up guy, too.

Rachel Higgins is an atypical villain in so many ways—a 70-year-old grieving mother and first-time killer with a motive that makes her intensely relatable, if not always sympathetic. Can you tell me a little about how her character took shape for you?

I met Rachel where my readers first meet her—sitting on her patio on a springtime afternoon in Phoenix, breathing in the fragrance of her neighbors’ orange blossoms and considering her station in life. She’s someone whose life has not turned out the way she wanted. She’s suffered the loss of her only child. She and her husband have suffered serious economic losses and they are living in reduced circumstances.

Besides being a fast-paced thriller, CREDIBLE THREAT is a thoughtful, moving meditation on grief, misplaced rage, and forgiveness. Were those themes on your mind while you were writing, or are they simply a byproduct of the story?

I don’t do outlining. I start at the beginning and write to the end. So I knew from the beginning that Archbishop Gillespie was in danger, but I didn’t know how it would turn out. Francis Gillespie has been in the background of the Ali Reynolds books since book number five, but I haven’t known much about him. I knew vaguely that he hailed from somewhere in the Midwest, but I didn’t know any of the details. So in the course of writing the book, not only did I learn about his origins, I also learned that he was a true man of faith. One thing that made me smile, however, was when he shows up on Ali’s doorstep during a Halloween party where she greets him while decked out in a Wonder Woman costume.

We spend a lot of time in Rachel’s head. Do you ever worry that a secondary character might upstage the series lead, and would it be a bad thing if they did?

Rachel’s character intrigued me. Yes, she’s a first-time killer, but—driven by misplaced revenge—she’s also a very determined one. She approaches the problem in a methodical fashion, very much aware of the kinds of forensic evidence that she doesn’t want to leave behind. A devoted follower of crime TV in general and Forensic Files in particular, she does her best to cover every contingency. And then, when her carefully laid plans start going haywire, instead of giving up, she keeps on going. I ended up respecting her, even though I didn’t like her.

Writing a series gives me a cast of characters to work with. Sometimes a background character moves to the forefront—as with Francis Gillespie in this case. Characters have a chance to change and grow over time. Ali Reynolds is not the same person she was when we first met her in Edge of Evil. Back then, she was a wronged wife whose high-profile newscasting career and equally high-profile marriage had both vanished in a puff of smoke. In CREDIBLE THREAT, with her husband occupied elsewhere, she’s the one who rallies cybersecurity firm High Noon’s troops in their effort to keep the archbishop safe.

I have to ask a question about Frigg—she’s such an inventive, unique character. When she first showed up in Man Overboard, did you know she’d be sticking around for a while? It seems like you have a lot of fun writing her…

When my husband suggested I write about artificial intelligence, I looked at him as though he was nuts. “Are you kidding? I’m a liberal arts major.” He’s a retired electrical engineer. I’m a storyteller. He gave me technical details about AI, and I turned them into… well… Frigg. I gave her a name. I gave her a presence. Once she realized she would be going down with her creator if he was brought to justice, an unexpected urge for self-preservation surfaced somewhere in the depths of her 800 GPUs. In my original version, at the end of Man Overboard, Frigg was a goner. But then my editor laid hands on the manuscript. When she finished reading it, she called and said, “Don’t kill Frigg.” And so I didn’t. Three books later, Frigg is still around.

Can you give us any hints about what’s next for Ali and the rest of the High Noon team?

I’m working on the next Ali book right now. All I can tell you is that Ali’s husband, B. Simpson, is the primary target.