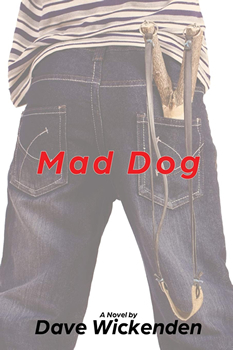 As Dave Wickenden’s MAD DOG shows us, growing up in 1975 Canada was pretty simple. Playing baseball and raiding gardens ruled. Books were best friends and learning about girls was terrifying yet exciting.

Daniel is framed and his best friends have seemingly turned against him. He runs away from home so that he can continue the hunt for the animal killer. With a group of unlikely allies—aren’t those the best kind?—Daniel must find evidence that points to the real killer or end up in prison for crimes he didn’t commit.

The story is set in a place the author knows well.

“The reasoning behind my setting (Sudbury, Ontario) was this was the old neighborhood that I grew up in and I was 14 in 1975,” Wickenden says. “All the locations mentioned in the book are real. There really was a Banana Pond and I actually swam at the pit. To make this realistic, I had to write the story in a time when kids actually played outside and I was part of that last generation that did just that. We were outside the minute we had breakfast and didn’t go in until after the streetlights went on.”

I remember those times fondly myself. I guess Long Island, New York, is not all that different from Ontario, Canada.

I told Wickenden that if I were to pitch this book—and in a way, I am—I’d describe it as Tom Sawyer meets Encyclopedia Brown and they go after Hannibal Lecter. How would he pitch it and what/who were his influences? Who did he read as a kid?

“Ha! I love your pitch,” he says. “I thought it was a cross between Stephen King’s The Body (AKA by its movie title, Stand By Me) and Todd Strasser’s The Good Son, both of which were favorites of mine. I was a voracious reader as a teen. I read everything from Don Pendleton’s Executioner series to Tarzan and Robert Ludlum.”

I told Wickenden that he had me—a 58-year-old tough-guy crime writer—rooting for a 15-year-old kid from Canada. I asked him to talk a bit about a book that could easily be placed in the Young Adult or Adult Mystery section. And how does he feel about categories such as those?

“Although I understand the reasoning for the different genres,” he says, “I’d like to think this book in particular would be of interest to both adults and teens. I still have teens (boys) living at home and they’ve read everything I’ve written. Both have commented that they just want to read a good story. Although I mostly write for an adult audience (some of my topics are sensitive, i.e. child abuse), my sons and I loved Eric Walters’s Rule of Three series and Chris Bradford’s Young Samurai series. They may be considered YA but the stories are great.”

Wickenden has served in the Canadian Armed Forces and the Fire Service. He’s saved people’s lives and has even brought some back. How does that feel, and how does that affect his writing?

“I had a fantastic career,” he says. “The experiences are definitely part of my stories. I have been able to write from experience on fire behavior and PTSD, and I will draw from my weapon knowledge both from my service as well as from hunting. I was fortunate to be part of SAS [Special Air Service] anti-terrorist training in 1980 with the Canadian Services in Petawawa (I was there to play a terrorist). In our down time we had a master corporal who taught us rudiment explosives, booby-trap techniques and long-distance shooting. (I love blowing up stuff.) It all helps.”

I asked Wickenden to tell me his fondest baseball memory from the mid-’70s. (I’m a Yankees fan, but was always fond of Rusty Staub during his stint with the Mets.) Also, what does he remember about his first kiss? (Daniel’s was pretty well described.)

“When I was a kid,” Wickenden says, “Rusty played for the Montreal Expos. I was never a big sports fan, but did have the Expos ball cap. We did play softball all summer on a gravel lot with large stones to indicate bases. Sliding meant taking off most of the skin on your shins, but hell, winning was bragging rights.

Perhaps for another story. So what’s up next for Wickenden?

“I’m editing my first YA fantasy thriller about four troubled teens who must stop an invasion on Heaven, because God’s not around,” he says. “I’m also about 20K into a political thriller that sees a 92-year-old dying veteran who decides to halt the rise of Nazism in America in his last days. I’m developing the screenplay for this story at the same time. I have adapted features for my first four novels.”

Finally, I asked Wickenden if he could put together a dream panel for ThrillerFest, moderated by him and featuring authors living or dead, who would be on the panel and what would the topic be?

“The dream panel would include John Hart, Robert Ludlum, James Clavell, and Shakespeare. The topic would be story ideas and research techniques. John Hart is a modern writer so has access to the internet, but the others wrote some fantastic stories, some of which held a lot of detail. It is so easy to research online, but it might help everyone’s story development if we knew their craft secrets.”

Sure it would help. But then they wouldn’t be secrets.

Dave Wickenden has spent time in the Canadian Armed Forces before the Fire Service, so he’s as comfortable with a rocket launcher as a fire hose. He has brought six people back from the dead utilizing CPR and a defibrillator and has assisted in rescuing people in crisis. He has learnt to lead men and women in extreme environments. He loves to cook, read, and draw. Dave ran his own home-based custom art business creating highly detailed wood and paper burnings called pyrography. One of his pictures of former Prime Minister Jean Chretien graces the walls of Rideau Hall in Ottawa.

At home in Canada, Dave and his wife Gina are parents to three boys and three grandsons. His two youngest boys are busy with minor hockey and fishing, so you can guess where you’ll find Dave when he’s not writing.

After 31 years in the Fire Service and attaining the rank of Deputy Fire Chief, Dave retired to write thriller novels full time. He has been a member of the Sudbury Writer’s Guild since 2014, the Writer’s Union of Canada and the International Screenwriter Association. His works are comprised of In Defense of Innocence (2018), Homegrown (2018), and Deadly Harvest (2019), and he has signed with Black Rose Writing for MAD DOG, due out in July 2020. He has adapted screenplays for his first three titles. He is currently working on his first YA Fantasy.