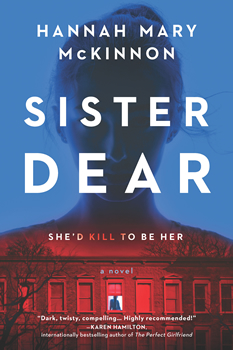 Eleanor Hardwicke is a loner, and she deserves it. Her mother has reminded her since childhood that she’s unworthy of love and attention, that she’s never been good enough. Especially not as good as her sister, Amy. But when the only person close to her, her father, dies of cancer, the loneliness is devastating. Her mother has never liked her, and Amy is her polar opposite. Eleanor has no one.

Her dad’s death is devastating: “Life After Dad. It was bleak down there. Empty and cold. Lonely. A place filled with despair, anger and hate.”

But the thing Eleanor can’t get out of her head is what she learned right before her dad passed away—he wasn’t her biological father. His gift to her is a name.

Eleanor uses her techno-wizard skills to investigate the man her mother had an affair with 35 years ago—Stan Gallinger, a real estate mogul and self-made millionaire. And she learns she has a half-sister, Victoria, who is everything Eleanor isn’t—confident, wealthy, enchanting, and fascinating. With her father dead, and her mother and Amy estranged, Eleanor desperately wants to find out more about the family denied to her.

Surely, watching them from a distance can’t hurt, and the pictures she’s snapped of them are innocent. That’s what she tells herself. But as times passes, she doubts her intentions. 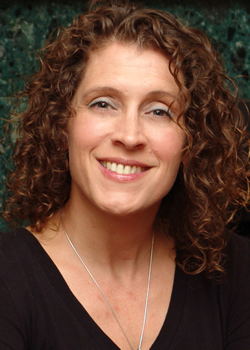 Comparing her life with her half-sister Victoria’s was like “watching the original Wizard of Oz movie—mine was the black-and-white part, whereas hers burst forth in rich, opulent Technicolor.”

Despite her mantra of No Good Can Come of This, Eleanor can’t help herself—she must connect with her “other” family.

When she started her journey, she’d wanted to get revenge against Stan and Victoria. Now she just wants a sister. And as Eleanor becomes closer to Victoria, the lines of propriety blur. She’s compelled to protect the dream sister she never had growing up.

Eleanor learns the art of calculated strategic planning and patience. “As I stood there and imagined Victoria’s perfect life, not only with a doting father but also a mother who wanted a relationship with her, the green-eyed monster within me woke up again and snarled, snapping its ugly sharp teeth.” But she also learns that jealousy is a fickle thing. The one who’s coveted might just be the one who’s the most envious.

Here, McKinnon chats with The Big Thrill about character development and the complex relationships within families.

What inspired the heartbreaking character of Eleanor Hardwicke?

I heard a radio segment about a woman who’d found a wedding ring at a playground, and she was trying to locate the owner through social media. It got me thinking—what if the woman found out the ring’s owner had a dream life and felt jealous? The more I thought about it, the more twisted things became. I realized the individuals had to be related somehow, and if I made them half-sisters, it would add to the drama and intrigue. It seems some of the most despicable acts are carried out within families. That was something I wanted to explore.

I knew from the beginning Eleanor would have a distinct lack of confidence, particularly regarding her physical traits. She’d perceive herself far more negatively than anybody else—primarily because of her relationship with her mother—and suffered from a kind of body dysmorphia. I wanted to show how the attitude of others can impact a person, how we carry these things forward and what they can do to us.

Can you talk more about how some people who’ve grown up with abuse become adults with the same tendency to hurt their children while others become parents opposite of their own?

I can’t speak from personal experience nor can I comment in any kind of medical capacity, so this is a difficult question for me to answer, one best left to the experts. From what I understand, the cycle of abuse, or the breaking thereof, is a complicated situation which depends on every individual’s circumstances.

How is being a “victim” an unconscious emotional decision, a self-fulfilling prophecy, and how did it cause Eleanor to sabotage her relationships?

How the psyche works is another difficult question best left for medical professionals. But in Eleanor’s case, this is what I imagined: her mother and sister shamed her from a very young age, leading her to believe she didn’t deserve love. It was easier for her to sabotage her other relationships rather than become fully invested, only to be pushed aside. It was her way of failing on her own terms rather than someone else’s. 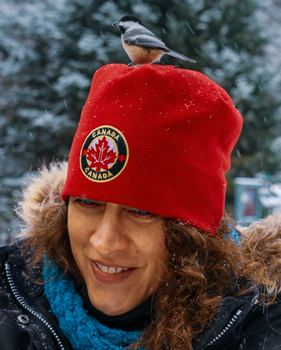 McKinnon in Mont Tremblant, Que., with a friendly local.

How did Eleanor’s emotional trauma and unhappiness manifest itself in her everyday life, such as her disregard for her personal appearance and binge eating?

This goes back to her sense of worth, or lack thereof. Eleanor didn’t believe she was anything special—that’s what her mother and sister force-fed her for years. Her binge eating was a form of self-punishment, her subconscious reminding her she didn’t deserve to be happy, look good, or have meaningful relationships. It was also her way of rebelling against her mother, who had always commented about her appearance and the amount she ate. By staying overweight, Eleanor was effectively standing up to her.

Explain more about the arguments stalkers use to justify their actions. When does interest move from curiosity (and in Eleanor’s case—jealousy) to obsession?

Eleanor justified her interest because she wanted, and felt she deserved, answers from her family. The more she uncovered about her half-sister, the more she wanted to find out, and the closer she needed to get to her sibling to do so. She kept telling herself she wasn’t doing any harm, and as things escalated, she convinced herself it was because she was “owed,” that it was “payback.” Her actions were also fueled by the fantasy of a perfect family, something she’d desperately wanted since she was a child.

Tell us more about the comparison between someone with emotional issues caused by trauma and someone who suffers from sociopathy.

It’s my understanding that a sociopath is often a pathological liar, has a lack of empathy and remorse, shame and guilt, and an incapacity for love. They have a “my rules for me, my rules for you” attitude, and can simultaneously be highly manipulative yet very charming, a combination they’ll use to get what they want.

On the other hand, many of us have some emotional baggage caused by our past or present, but that makes us human and layered, thankfully not sociopaths. 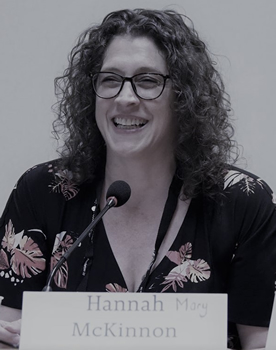 McKinnon participates in a panel called “If I Could Turn Back Time” at Bouchercon 2019 in Dallas.

Why did you decide not to write a happy ending?

For me, there was no other way to end the novel. I knew right from the beginning, before I’d written a single word, where the characters would be at the beginning and the end. I don’t think an ending has been that clear to me since I wrote my first book, and even in Time After Time, the ending changed somewhat.

The last chapters in SISTER DEAR are a gamble—some will love them, others will hate them—but I hope most readers will think about what happened for a while after they finish the book. Yes, I could have chosen a different outcome for my characters, but I believe I’d have risked making the novel predictable and boring. I like creating endings that surprise readers, probably because I enjoy being surprised that way by other authors.

Read as much as you can and listen to audio books. Write, even if you think it’s rubbish, because a blank page is impossible to edit. Another tip someone once suggested was to skip ahead if I couldn’t get a grasp on a chapter or scene, that I should focus on another part of the manuscript and trust myself enough to backfill later. It was revolutionary to me, and it beats the heck out of staring at a blank page or shoving my hand in the cookie jar.

I was also advised to read my manuscript out loud. Every. Single. Word. Doing so helps avoid repetition, improves cadence, and zaps stilted dialogue. And share your work. It can be scary, but it’s the only way you’ll get feedback and improve your craft.

I have parasomnia, which means I do strange things in my sleep, like shout and kick and fight off aliens, remove nonexistent plates of salad from our bed or play golf (which I don’t even play when I’m awake). I have no recollection about any of it in the morning. My husband swears I sat up one night, eyes wide, giggling, and wiggled my feet before solemnly announcing they were made of licorice.

A sleep study doctor told me I was like a whale (not the best of compliments) or an albatross (slightly better), which shut off half their brain to swim/fly long distances. Only part of my brain rests while the other remains highly active, which would explain why I’m exhausted the morning after these bizarre episodes. But they freak my husband out more than me because I don’t remember them.