Tormented by Secrets from the Past 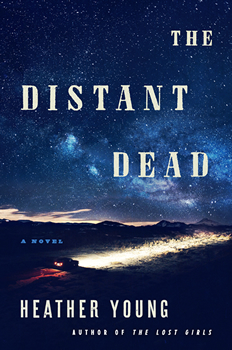 Secrets of the past torment the characters in Heather Young’s second novel, THE DISTANT DEAD.

Middle school teacher Nora Wheaton worries when her colleague, a math teacher, is late for work. Meanwhile, sixth grade outcast Sal Prentiss, pale and traumatized, reports a grisly scene to the authorities. Their journey to the truth will uncover their darkest secrets and lead them where they never wanted to go.

Young says the memory of crossing the desolate Nevada desert inspired this story. “My husband, kids, and I used to drive from San Francisco to Boise twice a year to visit my parents. In the vast Great Basin, we passed one little town: Lovelock, Nevada. I was struck by its isolation and the scrappiness of its persistent existence in a place so unforgiving.

“I also wanted to tie together the modern and ancient inhabitants of the region. Why do people move to remote places? What are they looking for? When a friend told me about a documentary she’d seen about a math teacher who was burned to death in Nebraska, my imagination got going,” she says. “I created a fictional math teacher with a mysterious past, moved him to Lovelock, and set him on fire.”

In the small-town setting, everyone knows everyone else. Young says, “You can never be anyone but the person whom that town believes you to be, and whether you’re happy there depends on whether you are happy with what everyone thinks of you. That tension is great fodder for novels. Both of my books have had at least one character who feels stifled by her small hometown and one who finds that same town to be a welcome refuge from a menacing, wider world.”

Young’s debut novel, The Lost Girls, explores love and loss over generations. “The things that happen in families cast long shadows. I was profoundly impacted by my grandparents’ decision to immigrate to America, my parents’ decision to leave their hometowns, and other choices previous generations made. When you hold your newborn baby in your arms, there is no such thing as a clean slate. I find that fascinating, and deeply human. I love writing about it.”

In THE DISTANT DEAD, the teacher, Nora Wheaton, has been stuck in Lovelock taking care of her alcoholic father for 12 years, but Young knew “Nora’s bitterness about her situation couldn’t be all there was to her. Anyone who makes such an enormous sacrifice is going to have complicated reasons. While she resents her father and how his choices have impacted her life, there is deep love between them, and she carries her own guilt over whether she could have prevented the tragedy that brought her back home. Her story is really about coming to terms with that tragedy and her role in it, and understanding her father’s response.”

The boy, Sal, also has issues, Young says. “Sal was a great character to write. I love coming-of-age stories about young people teetering on the far edge of childhood. They are already simmering to a boil just in the ordinary course of things, and when you throw in a major trauma, like someone they care about dying, or having to keep a terrible secret, you open up a rich vein for storytelling.”

A complex cast rounds out the story: among them, the victim, math teacher Adam Merkel; Sal’s forbidding uncles, Gideon and Ezra; Nora’s ex-husband; and a volunteer fireman named Jake. “He represents all the people in all the small towns in the world who love it there and wouldn’t leave for anything.”

The secrets these characters carry make this story spellbinding. As Young says, “Some secrets are worse than others. In THE DISTANT DEAD, I was interested in looking at two ways in particular that people deal with histories they regret. Some try to atone by how they live going forward. Others reshape their memories to convince themselves their mistakes weren’t their fault at all. Where I ended up in this story surprised me: as a sheer survival tactic, the latter approach works better, and it can even be admirable, in its own strange way.”

The opioid crisis also plays a pivotal role. Seeing it through Sal’s eyes presented a major challenge for Young. “I needed to understand the underlying causes and the mechanics of the illegal prescription drug trade, then filter out the things an 11-year-old boy living a sheltered and isolated life couldn’t be expected to know. I hope the true scope of the problem is visible beneath the surface, like an iceberg.”

Young brings a literary voice to the thriller genre. Although she didn’t set out to write a thriller, “I do believe in pushing a narrative to its most difficult, logical place. Characters kill each other. Characters die. Once I realized I’d entered the thriller/mystery genre, I decided I liked it there.”

Young credits the Bennington MFA program, “especially the brilliant Alice Mattison,” with helping her find her voice and complete her first novel. Additionally, the Sewanee Writers Conference helped her put the final touches on THE DISTANT DEAD.

While Young’s first novel took seven years to write, THE DISTANT DEAD was under contract and due in a year. The former attorney and stay-at-home mom had to keep a schedule. She writes five days a week for about five hours a day. A critique group and beta readers give her feedback.

For this story, “I did have the ending in mind before I began, but the character motivations evolved quite a bit. I hope the result is an ending that is morally complicated and compelling, because for me, that’s where the heat is in any story. As for weaving the narrative without telegraphing where I was headed, that’s the hardest part of writing a mystery or thriller. The ending has to feel inevitable, but only in retrospect. The reader can’t feel deceived, only artfully misled. I’d say 80 percent of my revision work is centered on making sure that delicate balance is working, and even then I’m never quite sure I’ve gotten it right.”

Young says she “makes a point of ending my stories with beats of redemption, and hope amidst tragedy. My survivors get to survive.”

What’s next? “A group of Mexican teenage boys arrive in a small Iowa town during World War II to work at a local poultry processing plant while the local men serve in the military. When several disappear under mysterious circumstances, the community must confront its prejudices and the possibility that one of its own may be a predator.” In Young’s deft hands, it sounds like another winner.

Young hopes that everyone will be safe and well, and that in 2021 “we will be able to raise our glasses together once more in celebration of writing and community.”