Finding the Core of Motive 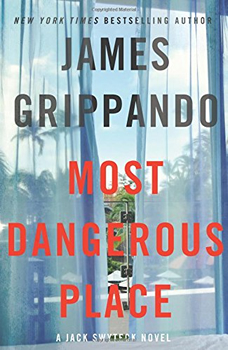 It seems the courtroom is a lot like the bestseller list: whoever spins the most compelling, emotionally affecting story often comes out on top. It’s not surprising, then, that some of the most hotly anticipated releases of 2017—Meg Gardiner’s Unsub, Lisa Scottoline’s One Perfect Lie, Linda Fairstein’s Deadfall—were penned by authors who honed their storytelling skills not in writers’ workshops and literary magazines, but in legal briefs and law journals.

One of the most successful and prolific of these attorneys-turned-authors is James Grippando, author of the long-running Jack Swyteck series. The Florida-based novelist spent 12 years as a trial attorney at a high-profile Miami law firm before leaving to become a full-time writer. His publishing career, which features several appearances on the New York Times bestseller list, began in earnest with the 1994 legal thriller The Pardon, and continues with his 25th novel, MOST DANGEROUS PLACE (out now from Harper).

Grippando has penned a number of stand-alone thrillers over the years, but his latest release (like his first) centers on Miami criminal defense attorney Jack Swyteck. The popular character’s 13th outing finds him representing a woman accused of murdering the man who raped her years ago. Jack initially takes the case out of a sense of duty to the accused woman’s family—Isabelle Ingraham’s husband is one of Jack’s oldest friends—but the case quickly puts the attorney at odds with Isabelle’s father, a Venezuelan consul who harbors a decades-old grudge against Jack’s own family.

With his 25th thriller on shelves now and Number 26 already in the pipeline, Grippando returns to the pages of The Big Thrill to unpack a few of the attorney tricks that have served him so well as a writer.

Like many of your novels, MOST DANGEROUS PLACE was inspired by true events. What was it about the case that compelled you to write about it?

My search for an answer led me to the controversial case of Norma Patricia Esparza. In 2012, Ms. Esparza—a wife, mother and respected psychiatrist living in Geneva—returned to the United States for the first time since college. She was immediately arrested and charged with the 1995 “revenge murder” of a man who had sexually assaulted her when she was a twenty-year-old student. Three things were undisputed: (1) Esparza was sexually assaulted; (2) she didn’t report it, but instead went to a campus nurse, who’d given her a “morning after” pill, and (3) Esparza’s attacker was brutally murdered. The question was, did Esparza have anything to do with it? Prosecutors maintained that Esparza was a manipulative killer who had taken the law into her own hands. Advocacy groups argued that she was victimized all over again. The truth, perhaps, was somewhere in the middle—between justice and revenge. The story drew me in, and the result is MOST DANGEROUS PLACE.

When the character of Jack Swyteck first took shape in The Pardon, were you intentionally laying the groundwork for a series?

Actually, I wrote The Pardon as a stand-alone novel, never intending to write a series. Jack seemed to resonate with readers, and as the years went by, the emails kept coming: “Whatever happened to Jack?” Five stand-alone novels later, I answered that question in Beyond Suspicion. MOST DANGEROUS PLACE is now the thirteenth in the series.

Why did it take you a while to circle back to him?

The Pardon wasn’t just a thriller. There was this great father-son tension between Jack, a young lawyer who defended death row inmates, and his father, Harry Swyteck, who as governor signed more death warrants than any governor in Florida history. It was a great father-son story, and my sense was that Jack and Harry Swyteck had worked out their differences. “The End” meant “The End.” But Jack was young—just 28 years old in The Pardon—and when those emails started coming from readers, both my editor and I realized that Jack had a lot of growing up to do. I churned out three Swytecks in a row—Beyond Suspicion, Last to Die, and Hear No Evil—and the series really gained traction.

When it comes to a series character like Jack, how do you strike a balance between character growth and staying true to the qualities that attracted readers to him in the first place?

I never make Jack do things that Jack would never do. The fact that roughly half my 25 novels are stand-alone thrillers without Jack is no accident. Great stories don’t always make great Jack Swyteck novels. You have to recognize that fact as a writer, and when the story just isn’t one that lends itself to a lead role for your series character, the biggest mistake you can make is to force the issue. I’ve written novels—Money to Burn, for example—that feature Jack’s wife Andie Henning in one of her FBI undercover roles, where Jack is nowhere to be seen. I let Jack be Jack.

Does he still surprise you from time to time?

All the time. When I outline a story, I never outline beyond the point of conflict, where good clashes with evil. The ending always works itself out in the writing, which is to say that the characters show me the way. All the characters surprise me along the way, which feeds into an ending that even I didn’t see coming. Jack grows in each installment in a way that I hadn’t anticipated. 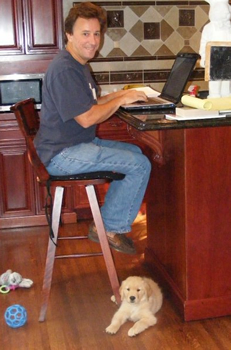 Jack is not super-cool, super-rich, or super-successful. But he is the kind of guy we all want as a friend—someone we care about enough to celebrate his good days and suffer through his bad ones as if they were our own. Theo Knight is the only innocent client Jack ever represented on death row, and he lives his life the way you would expect a man to live it after coming within a needle’s width of death by lethal injection: “Anything worth doing is worth overdoing.” Theo is so popular because all of us could use a friend like Theo—someone to remind us that “there are two kinds of people in this world, risk takers and s— takers.”

Andie plays a very different role in Jack’s life. She first appeared as young Agent Henning in Under Cover of Darkness. It was my editor who played matchmaker and suggested, “Hey, maybe Jack should meet Andie.” At first, it seemed crazy. Jack was a Miami criminal defense lawyer who can’t seem to avoid the limelight, and Andie was a rising star in the FBI’s Seattle field office who works undercover. These were two people who couldn’t be farther apart—geographically, professionally, ideologically. But it worked. It must be karma.

You’ve mentioned that you learned a lot about storytelling from your years as a lawyer. What’s the most useful tool a thriller writer could borrow from an attorney’s arsenal?

That’s a good question, and it puts a finer point on one that I’ve been asked many times in my career: Why do lawyers make good writers? If I had to point to one thing, it would be this: motive. Convincing fictional characters have strong and believable motives. Motive drives the character and plot, and not the other way around. For hero or villain, the paradigm is the same:

Lawyers make these same calculations in preparing for trial or negotiating a deal. Lawyers understand motive. Successful lawyer/authors make good use of that understanding.

Is there one single thing you’ve learned about writing thrillers over the years that you wish you’d known when you started?

Fortunately I learned this truth very early in my career: any thriller writer who tries to play the “can-you-top-this” game with nonfiction is doomed. Especially in today’s world, a novelist can’t make up things that are more shocking than real life. What you tap into as a successful thriller writer is the fact that readers are so sophisticated now that writers can craft more complex, multi-layered plots. It’s this savvy and sophistication—not shock value—that keeps thrillers entertaining.

Jack will be back. Novel No. 26 is already written, so obviously I know much more than I can tell at this point. Suffice it to say that Jack has met plenty of characters with a dark past. This time, Jack comes to face-to-face with the dark past of our entire system of justice. 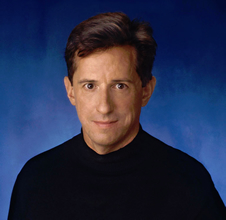 James was a trial lawyer for twelve years before the publication of his first novel in 1994 (The Pardon). He received his undergraduate degree from the University of Florida, where he graduated second in his class and was selected to Phi Beta Kappa. He earned his J.D. from the University of Florida College of Law, where he was Executive Editor of the Law Review and a member of the Order of the Coif. In 1983-84 he served as judicial clerk to the Honorable Thomas Clark of the U.S. Court of Appeals for the Eleventh Circuit. He is now Counsel to Boies Schiller & Flexner LLP, where he has handled a variety of intellectual property matters for a wide range of clients, from producers of Broadway shows to miners of personal data. He lives in south Florida with his wife of 22 years, three children, two cats and a golden retriever named Max who has no idea he’s a dog.

The Tesla Objective by David Sakmyster